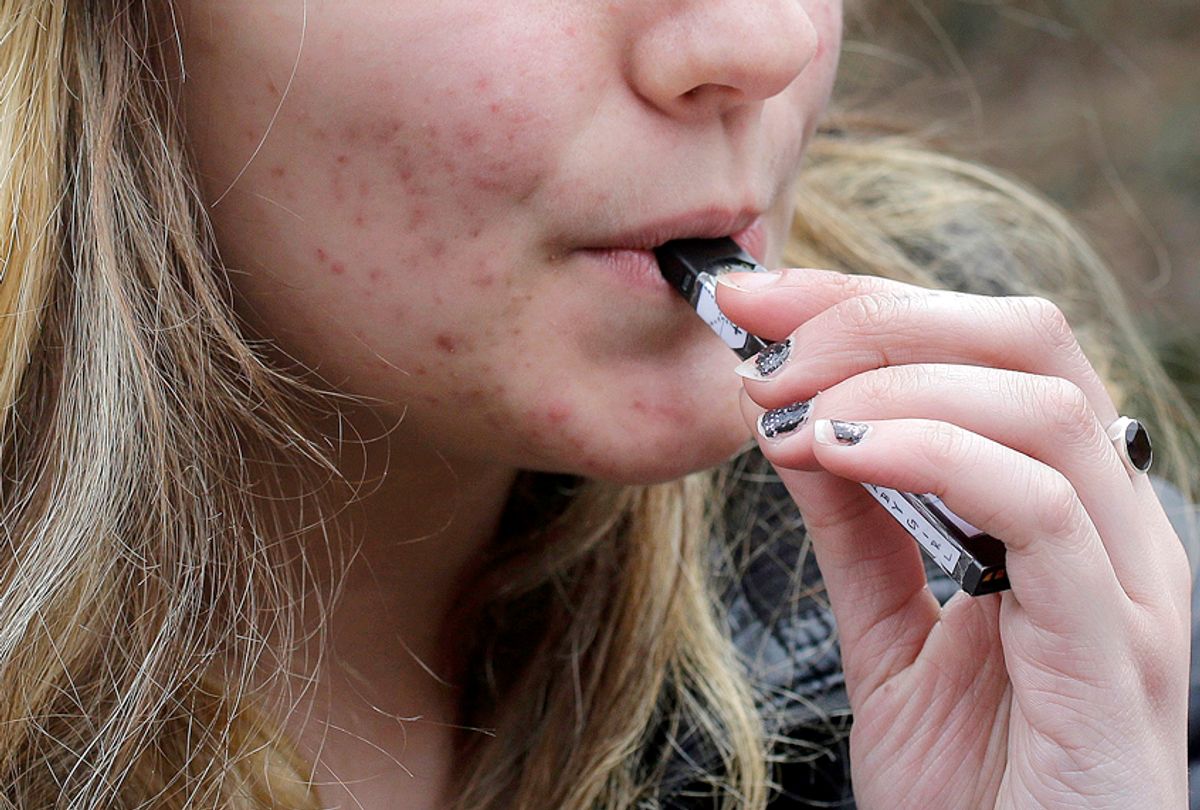 Yes, it has nicotine in it, but there are other reasons, too, that the Juul — an e-cigarette smoking alternative whose popularity and sales have grown exponentially in the last three years— is so addictive. It looks like a sleek USB drive, it charges via computer, and it is all the rage on social media. Oh, and it’s filled with nicotine salts, which means that each cartridge is loaded with as much nicotine as a pack of cigarettes. It’s also not without controversy: many outlets have reported that Juuling is exceedingly popular among high school students.

Now, the addictive e-cigs are facing a growing backlash. A recent report in Wired documented three new lawsuits faced by the company – two from users in California, and a third from the mother of a 15-year-old Juul user in New York.

The suits in California come from Bradley Colgate and Kaytlin McKnight, who filed in US District Court in Northern California, and Carl Cooper, who filed in the San Francisco Superior Court. Both Colgate and Cooper purchased Juuls with the hope that it would help their smoking addiction; instead, they say it only made their nicotine addiction worse. According to the suit, McKnight is now addicted to nicotine salts.

In New York, the mother of “DP,” a 15-year-old who was not fully named, came forward with a suit claiming that Juuls are designed with far too much nicotine, even for an adult smoker. DP's mother alleges in the suit that her son is “heavily addicted.” In the suit she explains that his addiction has affected both his behavior and academic performance.

The other component to these lawsuits involves targeting the marketing practices of Juul, particularly the role that advertisements may play in influencing adolescent consumption.

A recent exposé in The Verge notes that the two California suits claim that Juul’s marketing practices are “...creating, and addicting, an entirely new group of customers who are not regular smokers.”

Dr. James Sargent, a professor at Dartmouth Geisel School of Medicine, and a co-author on the study, “Receptivity to Tobacco Advertising and Susceptibility to Tobacco Products Among US Adolescents,” told Salon that he would be surprised if Juul were specifically targeting their advertisements to teenagers. Still, Dr. Sargent says he  does feel that Juul should do more to prevent teens from purchasing the product.

“You can’t design something that a 25 year old is going to just love that a 16 year old won’t also be interested in,” Sargent said.

Although the company clearly states that their products are catered towards individuals over 21 years of age, the website does little to reliably verify the age of the purchaser. Sargent compared the age verification system of Juul to the cigarette company Marlboro, saying that the Juul system in comparison was far too easy to bypass.

In the medical community, there’s been a push for the review of e-cigarettes and vapes, especially because of their prevalent use among adolescents.

In 2016, the Center for Disease Control noted that teenage cigarette smoking rates were at their lowest level since 1991 — down to 11 percent. However, the same study said 24 percent of high school students had tried e-cigarettes within 30 days prior.

A number of health groups and organizations filed suit in late March against the Food and Drug Administration (FDA), in an effort to expedite their review process, saying that delaying the reviews is a legal violation, and that it will keep “kid-friendly tobacco products on the market for years.”

According to Matthew Myers, the President of the Campaign for Tobacco Free Kids, which was one of the organizations involved in the FDA suit, a review of individual products is necessary; he says that studies that look at e-cigarettes generally are not helpful.

“The fact that FDA has not required these products to be reviewed prior to their marketing means that the consumers are left guessing, with studies all over the place,” Myers told Salon. “This is a failing of the Food and Drug Administration.”

“The phenomena of youth use of Juuls wasn’t an accident — it was prompted in part by a multimedia social media campaign, funded by Juul,” Myers added.

Juul is among the e-cigarette companies that have faced backlash for creating products that seem to target adolescents and minors, with pod flavors such as “creme brulee” and “fruit medley.”

San Francisco was one of the first cities to ban flavored e-cigarettes under the premise that flavors are a deliberate attempt to target underage smokers, even kids. In June, San Francisco voters approved proposition E, which bans all flavored tobacco products. Tobacco Free Kids was among the organizations that supported the proposition, which passed with 68% of the vote despite a million-dollar "No on E" campaign led by Big Tobacco, specifically R.J. Reynolds Tobacco Company.

“San Francisco’s action is the best way to protect its citizens,” Myers said.

In response to the legal allegations, a Juul made a statement to Wired saying, “Juul Labs does not believe the cases have merit and will be defending them vigorously.”

However, Myers says the protests of innocence by Juul are “too little too late,” referencing what he called an “epidemic among young people.”

“The genie is out of the bottle,” Myers told Salon. “You can’t put it back in.”