Bernie Sanders and Alexandria Ocasio-Cortez in Kansas: A progressive surge in Middle America? 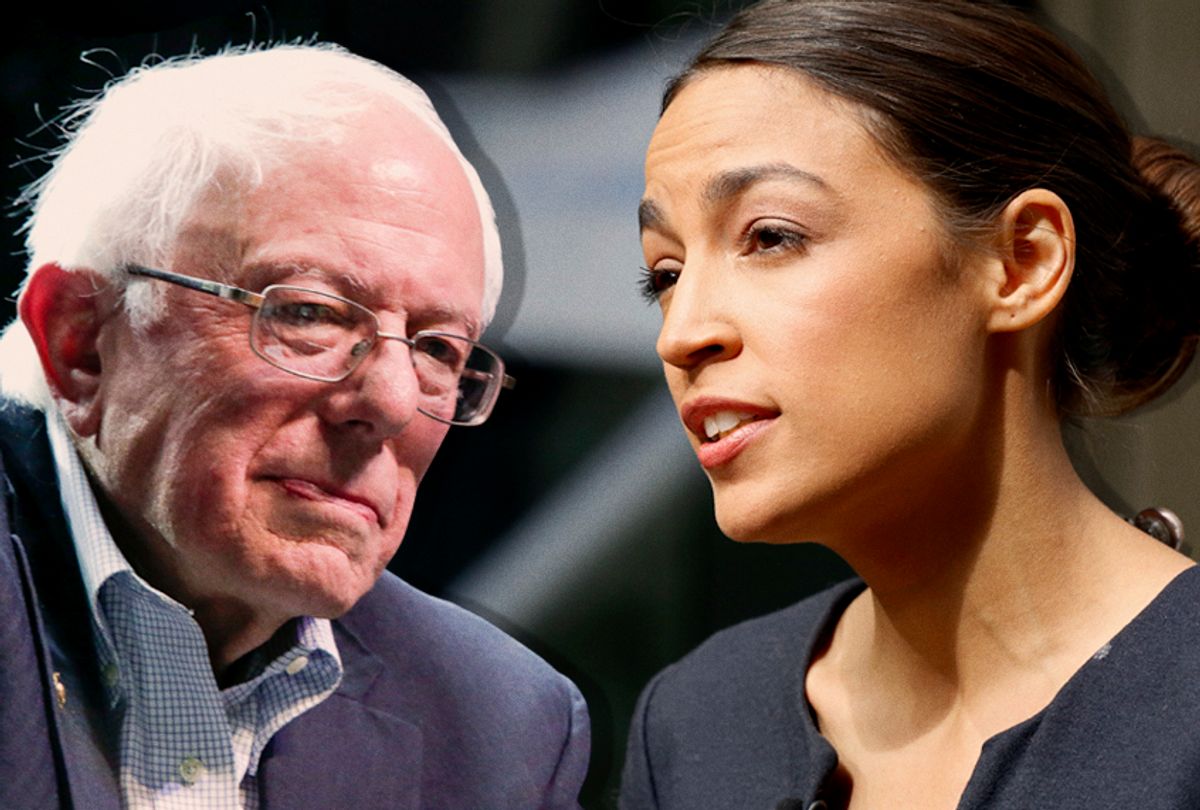 A specter is haunting middle America. Last Friday, Alexandria Ocasio-Cortez, the 28-year old democratic socialist who stunned the Democratic Party last month in New York with her primary defeat of Rep. Joe Crowley, joined Sen. Bernie Sanders in Kansas to stump for progressive congressional candidates Brent Welder and James Thompson — and to bring their message to the heartland.

Going by what many top Democrats have said, this will all be a big waste of time. After all, every moderate Democrat knows that democratic socialism could never appeal to Midwesterners who love God, guns and freedom. As the AP observed in its report, Donald Trump "won Kansas in 2016 by 20 percentage points, making it seemingly inhospitable for Democrats, much less democratic socialists.”

Most of those in or near the Democratic Party leadership tend to agree with this sentiment. As Sen. Tammy Duckworth, D-Ill., opined shortly after Ocasio-Cortez’s victory, democratic socialism may be the future of the party in the Bronx, but “you can’t win the White House without the Midwest and I don’t think you can go too far to the left and still win the Midwest.”

This remains the conventional wisdom. Within the Democratic Party there remains a strong consensus that centrism is politically pragmatic while socialism is politically suicidal, and that working-class people in states like Kansas, Michigan and Wisconsin are middle-ground moderates who abhor any form of radical politics.

In response to Duckworth's comments, Ocasio-Cortez pointed out in a recent tweet that Sanders — who was not shy about his forceful, progressive policy ideas — won the 2016 Democratic primaries or caucuses in Michigan, Minnesota, Kansas, Nebraska, Wisconsin and Indiana, while the Democratic Party went on to lose all but one of those states in the general election. (Hillary Clinton narrowly carried Minnesota; the others were all won by Trump.) “What’s the plan to prevent a repeat?” asked Ocasio-Cortez.

This debate has been going on for some time now, and while progressives and democratic socialists believe that the Democrats must shift to the left to win again, moderate liberals and centrists are convinced that such a shift would prove even more disastrous for the party than its current trajectory. This may not be the best way of framing the debate, however; this is not simply a question of moving to the left or staying in the center, but about embracing a new kind of politics or adhering to the old.

On the left, candidates like Ocasio-Cortez are rejecting long-held assumptions, whether it’s the assumption that money wins elections (and thus that big donors are a necessary evil), that “socialism” can never appeal to average Americans, that “demographics is destiny,” or that "moderate" policies are inherently pragmatic. Progressives believe that we are at the dawn of a new political era, where the old rules no longer apply; centrists believe that “populism” is just a fad, and that things will settle down and return to normal once Trump is removed from office.

One simply has to look at the dominant narratives promoted by these two groups in the Trump era to see how different their strategies have been. While “Resistance” liberals and centrists have been consumed by the Russia scandal, focusing almost exclusively on Trump and how to limit his power or remove him from the White House, progressives and democratic socialists have attempted to put forward an ideological vision to combat the right-wing populism that empowered Trump in the first place. Many Democrats are convinced that anti-Trumpism is a winning strategy for 2018 and 2020 -- or at least a sufficient strategy -- and seem intent on replicating Hillary Clinton's unsuccessful template from 2016.

Hillary Clinton was widely seen as a defender of the status quo, and her campaign put immense amounts of time and energy into pointing out how terrible Trump was. According to a study by the Wesleyan Media Project, only 25 percent of the Clinton campaign’s television ads were about policy, while the majority were personal attacks against her opponent. By comparison, every other presidential campaign going back to 2000 devoted at least 40 percent to policy-based ads — in most cases, it was more than 60 percent.

Yes, Clinton won the national popular vote, but she did not win the election. Anti-Trumpism was not enough, and the Clinton campaign’s failure to offer an alternative to the status quo was perhaps its greatest single flaw This will continue to be true for opponents of right-wing populism in the future. As political theorist Yascha Mounk writes in his book “The People vs. Democracy,” the “defenders of liberal democracy will not vanquish the populists as long as they seem to be wedded to the status quo.”

There have been countless think-pieces about how Clinton’s failure in the Midwest cost her the 2016 election, and there seems to be widespread agreement that the Democratic Party must rethink its strategy to win in these states again. But the dispute between Ocasio-Cortez and Duckworth reveals the sharp underlying disagreement about how to do this. Many liberals genuinely believe that people in the Midwest have a uniquely moderate political disposition, and that an ideology like democratic socialism is far too radical to catch on in the heartland. But this idea is fundamentally mistaken, and ahistorical too.

Democratic socialism is a form of class politics, and class has always played a major role in politics in the midwest. During much of the 19th and 20th centuries, the Midwest and Great Plains regions were a hotbed for populist movements and left-wing politics. The most prominent socialist in American political history -- at least before Bernie Sanders came along -- was Eugene Debs, born and raised in Terre Haute, Indiana.

The always insightful Thomas Frank, who grew up in Kansas, has written extensively about the tradition of radical politics in middle America, and how the conservative movement captured many of these states in the late 20th century. His thesis is simple: Republicans employed their own style of class politics, and in doing so offered a new, distorted definition of class.

“Class, conservatives insist, is not really about money or birth or even occupation,” Frank writes in his 2004 bestseller, “What’s the Matter With Kansas?” “It is primarily a matter of authenticity, that most valuable cultural commodity. Class is about what one drives and where one shops and how one prays, and only secondarily about the work one does or the income one makes.”

The erasure of the economic is a necessary precondition for this kind of thinking. “In some ways,” Frank comments, this reactionary vision “is nothing more than an old-fashioned leftist vision of the world with the economics drained out. Where the muckrakers of old faulted capitalism for botching this institution and that, the backlash thinkers simply change the script to blame liberalism.”

Though conservatives are notorious for accusing liberals of “class warfare,” they have been waging their own cultural class war against “liberal elites” for the past 40 years. At the same time, of course, the Democratic Party has largely abandoned the working-class politics and social-democratic policies that it was known for throughout the 20th century, embracing neoliberal economics after the Reagan revolution (or, rather, counterrevolution). In a sense, then, progressives and democratic socialists are attempting to revive a class politics with the economic element restored.

It is not a mystery why class politics has become relevant again, decades after the Democratic Party adopted a neoliberal stance on economic issues. Since the 1980s, economic inequality has returned to historic levels not seen since before the Great Depression, while a recent UN report documented the extreme poverty found throughout the United States, noting that “the American dream is rapidly becoming the American illusion.” The democratic socialism promulgated by Sanders and Ocasio-Cortez offers an alternative to this status quo, while the single-minded politics of anti-Trumpism offers nothing more than a return to the previous status quo.

It remains to be seen, of course, whether 21st-century Midwesterners are ready to embrace democratic socialism in the voting booth. But the history of radical politics in the heartland clearly shows that it is not necessarily the land of moderates that so many Democrats seem to think.

Being anti-Trump is not enough