The Daily Caller asks readers: Should kneeling NFL players be tortured or deported? 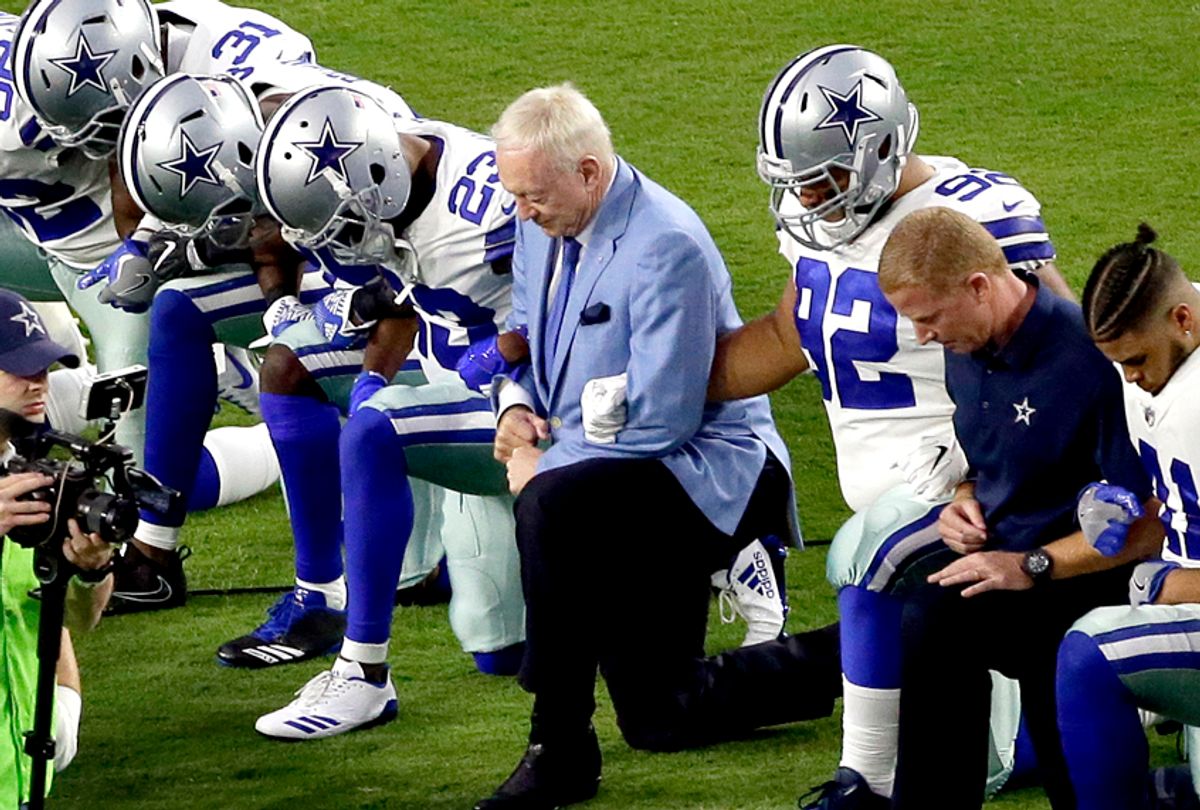 The Dallas Cowboys, led by owner Jerry Jones, take a knee prior to the national anthem before an NFL football game. (AP/Matt York)
--

In May, the National Football Association announced a rule barring players from protesting during the national anthem on the field, mandating that if players still decide to sit or kneel, teams will be subjected to fines. It was a sweeping move meant to quell the controversy that's grown over the last two seasons after several black players demonstrated against police brutality and racial injustice, causing conservatives to decry their protest as disrespectful to the flag. After it was recently announced that the anthem policy is now on hold, the far-right website The Daily Caller decided the NFL's solution to silence its players did not go far enough.

"While the NFL only just settled on a 'punishment' for these disrespectful players, a lot of people think that there should be a more drastic penalty for their behavior," contributor Annie Caputo wrote, in an article published Wednesday, titled "HOW DO YOU THINK NFL ANTHEM-KNEELERS SHOULD BE PUNISHED?"

"We want to know which of these punishments would be the most effective in teaching these players a lesson."

The website then listed six possible repercussions: termination of contract, one month's pay docked, one-year suspension, deportation, spanking and forcing players to be restrained in the torture device known as the Stocks.

"Since these 'protestors' love to make a public spectacle of themselves, perhaps some time in the public stocks could teach them a lesson in loyalty to one's country," Caputo wrote.

The Daily Caller then encouraged its readers to "Rate what you think is the best punishment and see you [sic] agrees with you, then leave your answer in a comment below!" Termination of contract currently has the most votes.

The article also spends a lot of time at the beginning inciting outrage towards these athletes. "I mean, you make millions of dollars to play a televised game," Caputo said. "No one asked for your political views, nor did they tune in to watch a bunch of famous athletes blatantly spit on the legacies of those who have sacrificed everything just so that they could be playing football for a living."

Also on Wednesday, Jerry Jones, owner and general manager of the Dallas Cowboys and Donald Trump supporter, told reporters that he would not allow players to remain in the locker room during the national anthem, which had previously been an alternative to the new rule.

President Trump praised Jones in October 2017 for his hard line on the national anthem. "A big salute to Jerry Jones, owner of the Dallas Cowboys, who will BENCH players who disrespect our Flag," he tweeted. But according to Jones, he would very much like the president — who has frequently commented on the protests and encouraged harsh punishments for athletes who do so — to leave it alone.

"His interest in what we’re doing is problematic, from my chair, and I would say in general the owners' chair," he said Wednesday during a news conference. "It’s unprecedented if you really think about it. But like the very game itself, that’s the way it is and we’ll deal with it."

"We feel strongly about how we deal with it and we'll do so accordingly," Jones added. "But, yes, I, like everybody, would like for it to go away."