3 theories that explain Trump’s approach to Putin and Russia. Which makes the most sense?

By Occam's Razor, he's probably not a Manchurian candidate 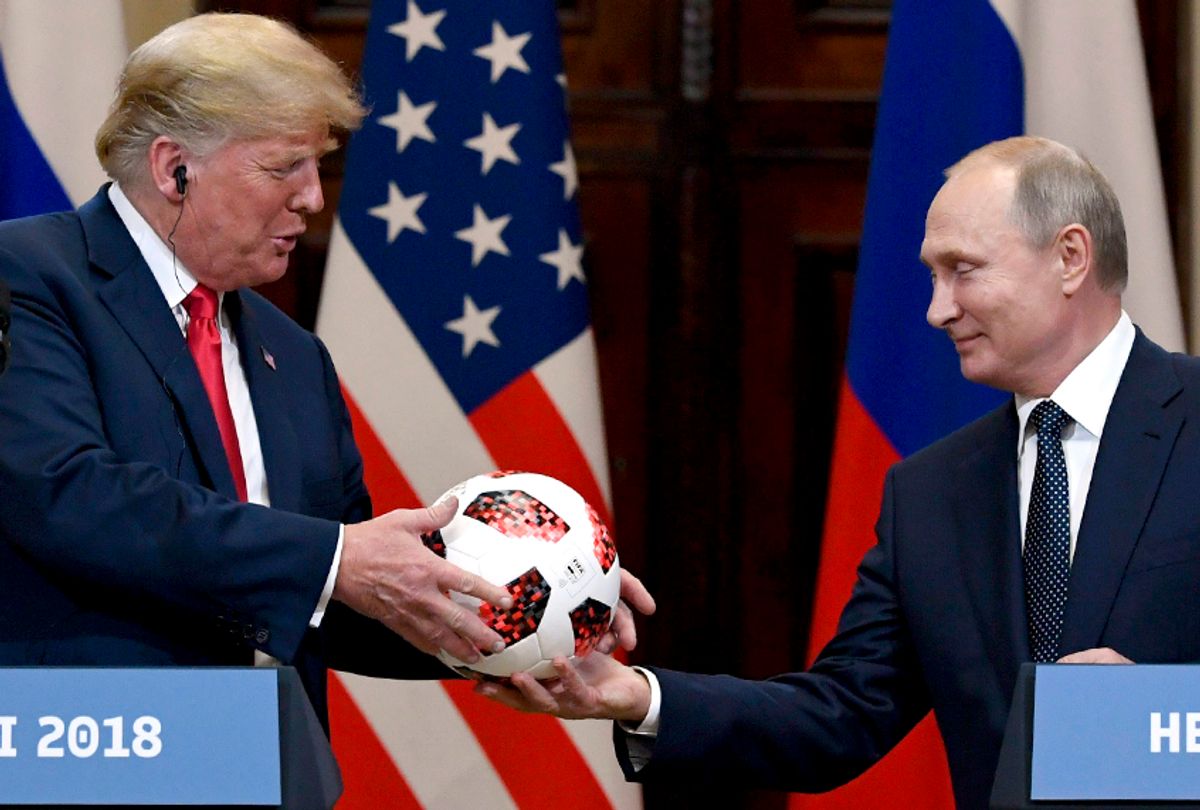 There are three general theories to explain Trump’s behavior toward Russia (and other hard-right broadly autocratic regimes), and for unknown reasons the two most likely ones are almost entirely absent from our electronic media. The three theories, in ascending order of likelihood, are:

The Manchurian Candidate theory was largely the one Democrats implied during the election, and most have implicitly embraced since then, along with many commentators on MSNBC and CNN. It’s the least likely, although if it’s true Robert Mueller will probably be letting us all know soon. But there’s little in Trump’s past that would suggest this is the case other than his embrace of Russia over the Obama administration’s reactions to the annexation of Crimea and activity in Ukraine.

But it’s far more likely that his support of Russia during the Obama administration had everything to do with hating on anything our nation’s first Black president had done (impose sanctions on Russia and expel diplomats, etc.) as well as wanting to trash the presumed 2016 Democratic presidential candidate, Secretary of State Hillary Clinton.

Even his dislike of NATO is the sort of standard-variety right-wing stuff that’s been promoted within the Republican Party from the days of the John Birch Society to Steve Bannon’s recent reign, and reflects an isolationist fear of alliances rather than an affection for non-NATO actors like Russia.

The Wannabe Dictator theory has a lot more credibility, and explains much of why Trump gravitates to strongman types like Putin, Turkey’s Erdogan, the Philippines’ Duterte, Saudi Arabia’s Mohammed bin Salman, and China’s Xi.

Trump knows very little about the history behind democratic republics (it would be shocking if he could even identify Thomas Hobbes or John Locke, or define the Enlightenment) and virtually nothing (based on public pronouncements) about the fundamental reasons why “Governments are instituted among men, deriving their just powers from the consent of the governed.”

Businesses are basically serfdoms. The CEO is the king, the board and senior executives are the courtiers and landed gentry, and the workers are the serfs. This has been Trump’s experience ever since he inherited his daddy’s business, and he’s never in his life been accountable to any principle (like “democracy”) or to any persons.

So, much like George W. Bush’s “joke” that, “If this were a dictatorship it would be a heck of a lot easier... as long as I’m the dictator,” Trump not only may think it would be easier, but, even more ominous, may think it’s desirable for the country.

Republicans have long used false analogies of “government as business or home” (particularly with regard to debt) that completely distort the real reasons for the existence of, and functions of, government. So it wouldn’t be at all surprising if Trump were to believe this nonsense, out of both ignorance and temperament.

The Deadbeat theory is the most likely, although it doesn’t preclude either or both of the above.

When given a variety of possible explanations for something happening, usually the most simple and direct answer is the correct one. And there’s one huge, simple, straightforward explanation for Donald Trump’s perpetual unwillingness to even hint at a direct criticism of Putin. And it’s not the pee-pee tapes.

Here’s how and why.

We all know that Trump is both a terrible negotiator and a terrible businessman. Dozens of his companies have gone down in flames, thousands of small businesses and workers have been screwed out of money he owed them, and his bankruptcies are legendary.

If the American people didn’t seem to think this was a big deal, the American banks sure did. After Trump’s last bankruptcy, so far as press reports indicate, he could no longer borrow money at reasonable rates here in the U.S., and a real estate developer who can’t borrow money is rapidly out of business.

So Trump, as his son Eric tells it, turned away from U.S. banks and went to a number of Russian billionaires for his money. In 2014, when asked directly how he could have acquired $100 million in cash for new golf course acquisitions, Eric Trump famously said, “Well, we don’t rely on American banks. We have all the funding we need out of Russia.”

So, if President Putin were to order his own billionaires to get their money back out of Trump’s properties and refuse to give him any more, Trump could well end up broke.

As in, losing all his properties, from Mar-a-Lago to Trump Tower.

It could wipe out all of his remaining businesses.

His kids would have to get real jobs, and no more big-game safaris.

His wife might leave him, and take their son.

He could end up living in a cardboard box on skid row.

If he’s seeing that collection of pictures in his head when he looks at Vladimir Putin, it would go a long way to explain his prayerful body posture and cringeworthy sycophancy.

This also would explain why Trump has been so unwilling to release his tax returns, even after he won the election.

As David Cay Johnston has pointed out on multiple occasions, Trump is almost certainly nowhere near as rich as he brags that he is, and has a long history of connections with shady/mafia characters to get the money he needs.

But this is not about just being embarrassed by being caught about inflating his net worth — Trump’s a man who has little ability to feel shame, as we have seen over and over again. Similarly, it’s not about the pee-pee tapes.

After bragging that he can grab women by the crotch — and having dozens come forward and accuse him of variations on just that — he must know that if he’d paid a couple of white Russian hookers to urinate on the bed that our nation’s first Black president and his wife had slept in, it may well actually help him with his base. It surely wouldn’t hurt him politically, and he knows that as well as anybody.

It’s why he’s even willing to take the risks and political hit by defying the Constitution and hanging onto the Trump Hotel in D.C. — he needs the money to keep his businesses afloat.

In 2016, Fortune magazine analyzed his federal public filings, and concluded that he’s both less wealthy than he says and appears, and that he regularly lies about it.

Occam’s razor dictates that, like with everything else in Trump’s entire life, this is all about money and its relationship to his own fragile self-image. If a few Russian oligarchs said, “Nyet,” he would suffer severe damage, both reputational and business-wise, and it may well be damage from which he couldn’t recover.

It may also explain why Russia (and a few other countries with billionaire oligarchs and/or Trump business interests, from the Middle East countries with Trump properties, to China with Trump’s daughter’s manufacturing) were enthusiastic about Donald Trump becoming president.

A man who depends on you for his financial lifeblood is a man more willing to give in around governmental and policy areas.

Now that Robert Mueller has, according to some reports, acquired access to Trump’s business records, all this may be coming out, which may explain why Trump seems so obsessed with, and frightened by, Mueller’s and the FBI’s “witch hunt.”

If Mueller exposes financial fragility on Trump’s part, it may tip the first domino that then causes the entire Trump empire to collapse.

It’d be interesting to see if the Chinese, for example, would then claw back the billion dollars they just pledged to Trump’s Indonesian property, or his daughter’s hundred-million-dollar Chinese trademarks, which coincidentally preceded by days Trump’s decision to let ZTE resume selling spy-able phones to U.S. citizens.

Equally interesting will be if the Middle Eastern billionaires and state wealth funds that are loaning over a billion to bail out Jared Kushner decide he’s no longer a good bet, either.

This is one of the few scenarios that explain pretty much everybody’s behavior within the Trump Crime Family, as well as the people in their immediate orbit.