Is Donald Trump using transphobia — and one judge's ruling — to launch an attack on women's rights? 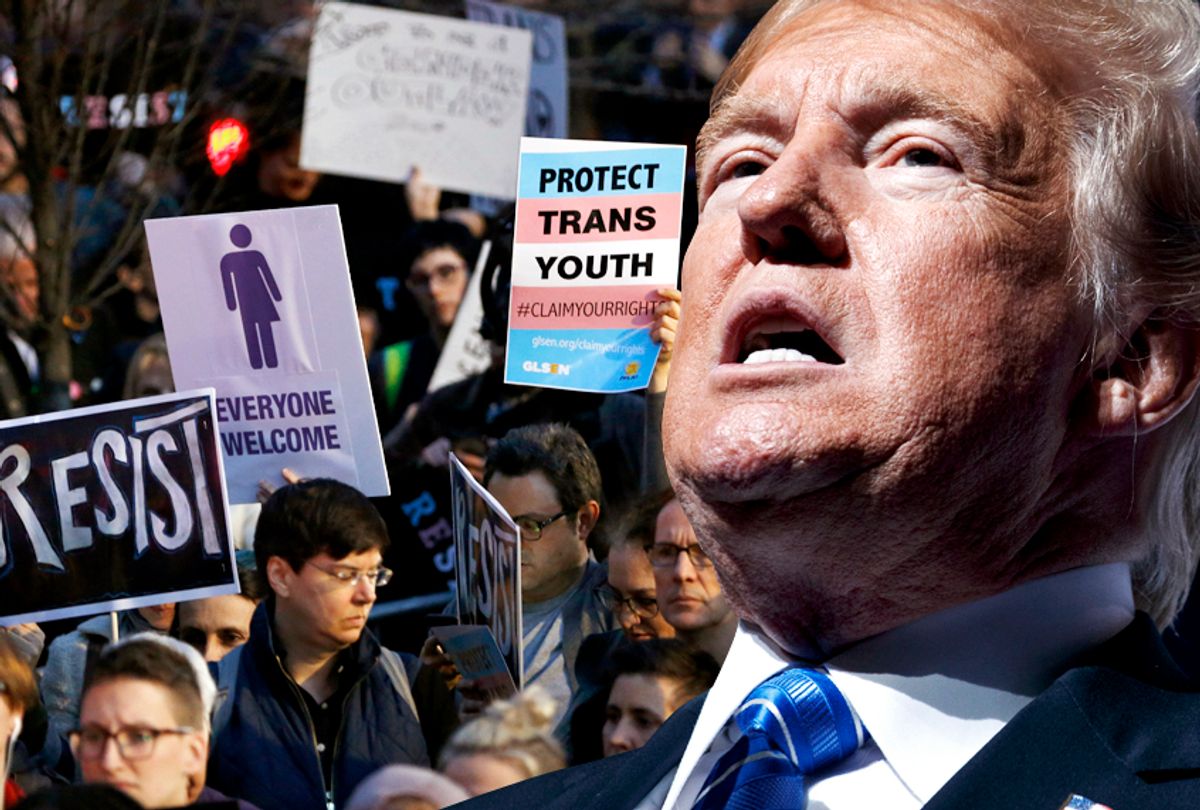 It's no secret that President Trump and his administration are hostile to transgender people, even if Caitlyn Jenner only came to that realization after supporting Trump during the campaign. Trump famously decided to ban transgender people from serving in the military by declaring it on Twitter, and has aggressively resisted any effort by the courts to block him.

This administration has also pursued policies that endanger the safety of trans students in public schools and trans people in federal prisons. But now there is reason to believe that Trump isn't just attacking trans people for who they are — though he is definitely doing that — but also exploiting prejudice against this marginalized minority to launch a broad attack on women's rights.

Last week, the Sunlight Foundation released an extensive report on changes to the language on the Health and Human Services (HHS) website regarding the issue of sex discrimination. These changes were made in the summer of 2017 and discovered by the National Women's Law Center, which has filed requests under the Freedom of Information Act (yet to be fulfilled), to find out why. But the fear is that soon the administration will release a rule that guts enforcement of a major provision in the Affordable Care Act meant to prohibit sex discrimination.

The HHS website was updated shortly after that to reflect this injunction. As the Sunlight Foundation report shows, a few month later the agency took a wrecking ball to the language on the site about sex discrimination, altering far more than the passages that had addressed gender identity and pregnancy termination.

"There was widespread removal on the pages related to Section 1557 simply defining sex discrimination," Rachel Bergman, who helps run the Web Integrity Project at Sunlight, told Salon. "We were a bit puzzled as to why the language removals were as expansive as they are."

“When we saw these changes to the website, it was troubling because it was one part of what we expect to see, which is a general rollback" of rules against sex discrimination, explained Kelli Garcia, director of reproductive justice initiatives at the National Women's Law Center. Her organization opposes the rollback of protections for trans people in itself, but Garcia suggested that the administration may be looking to open the door to other forms of sex discrimination as well.

“The Supreme Court has clearly recognized that you can’t discriminate against someone because they fail to meet your stereotypes about what one’s sex or one’s gender is supposed to be," Garcia explained, citing a 1989 decision in which the court determined that it was sex discrimination to demand that women dress in a feminine fashion or to hold them to a different standard of behavior than male employees.

“If you roll back the sex stereotyping protection, that is a massive and huge contraction, and an attempt to roll back our longstanding understanding of what sex discrimination is," she added.

Omar Gonzalez-Pagan, a health care attorney for Lambda Legal, said that the Trump administration is both seeking "to erase LGBTQ people from civil rights law" and likely pushing a "very primitive, narrow understanding of what sex entails" that will harm not just LGBTQ people, but "non-stereotypical men and women."

If, as some legal experts fear, the administration is moving to eliminate sex stereotyping from the list of what constitutes unlawful sex discrimination in health care, that could have far-reaching consequences. It would not only make it harder for trans people to get even basic health care services without fear of discrimination, and could also open the door to all manner of discrimination. A pharmacist who refuses to fill a birth control prescription for a woman because she is unmarried, or a nurse who taunts a young male patient for being a "sissy," might fall outside the bounds of what the government now wants to consider sex discrimination.

Adding insult to injury, Gonzalez-Pagan said, is the way that conservatives are pursuing this effort to gut sex discrimination protections -- by using "one court ruling by one judge in Wichita Falls, Texas," while ignoring numerous other court decisions that have found that trans people are legally covered by the anti-discrimination clause in the Affordable Care Act. Instead of defending the existing regulation, as the Department of Justice would normally do, the Trump administration filed a status update with the Texas court, indicating the soon-to-be-announced change to the HHS understanding of what constitutes sex discrimination.

According to Gonzalez-Pagan, O'Connor is a favorite judge for conservatives who go "forum-shopping" in search of rulings that limit the rights of LGBTQ people. In 2015, O'Connor blocked same-sex married couples from using federally-mandated leave time to care for a sick spouse, a decision that was shortly overturned when the Supreme Court legalized same-sex marriage nationwide. In 2016, he also enjoined a federal law granting trans students the right to use the bathroom corresponding with their gender identity and opened the door to preventing trans workers in government offices from having similar protections.

Conservatives, with the cooperation of the Trump administration, are also using O'Connor to keep alive a lawsuit clearly meant to end the Affordable Care Act.

Whether the Trump administration hopes to open the door to widespread sex discrimination, as these moves suggest, or simply intends to strip away protections for trans people and women who have had abortions, this poses a serious threat to people seeking health care.