Far from home, the dulce de leche cake I didn't know I was looking for 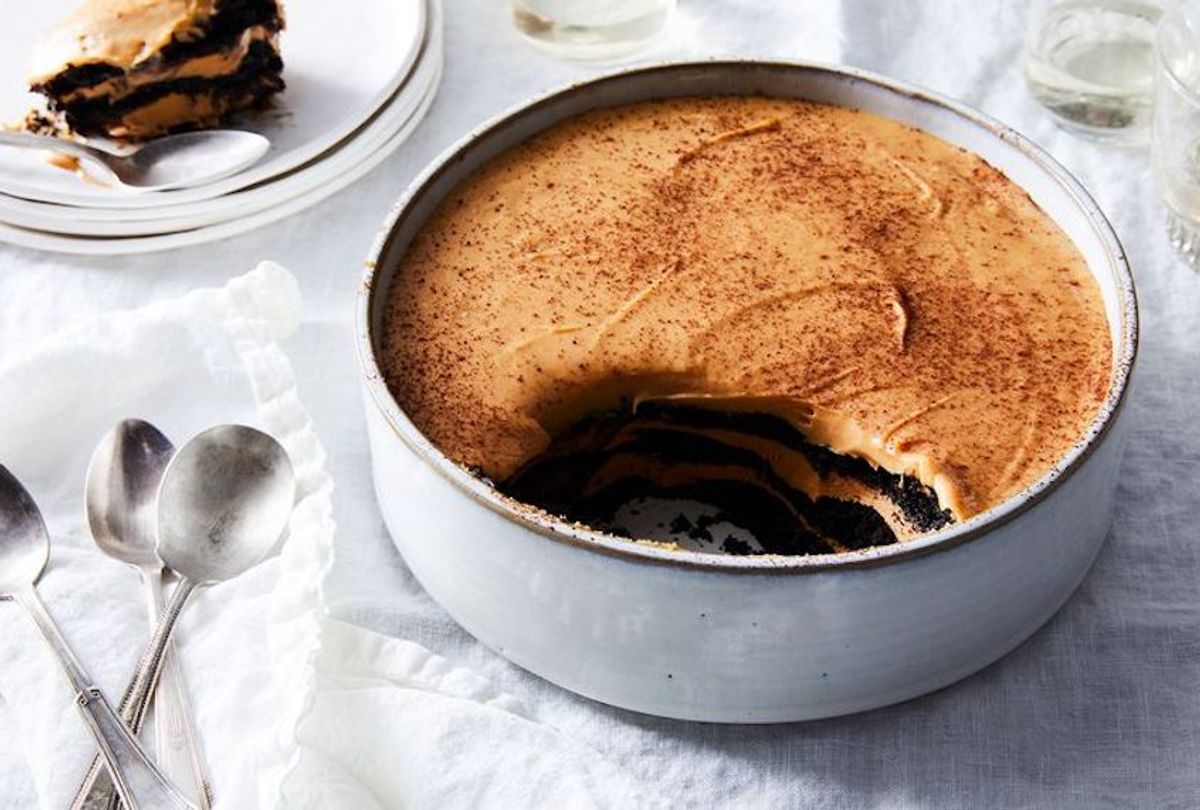 My host mom Nora picked me up at the Buenos Aires airport and drove me to what would be my home for the next four months, her two-bedroom flat on the edge of Recoleta, one of the city’s nicer neighborhoods. You could tell my room used to be pink — a relic of her eldest daughter who had moved out over a decade ago — but all the frilliest details had been covered up or put away, except for a few pressed flowers in the frame above my new bed.

Our first hours together, she left me mostly alone, closing the door to my room after pointing to my suitcase and then to a chest of drawers, suggesting I unpack, make myself at home. After dark, she knocked on my door and beckoned me to the kitchen, where on the table she had arranged a small Nokia phone, a map of the city, and a plate of something that looked like shepherd’s pie. I smiled. She talked so fast that she had no time to sit as she pulled out my chair, filled my glass with water, motioned to the phone on the table, and started pressing buttons with her skinny fingers. She wore chunky four-inch platforms but only came up to my armpit. A curtain of choppy, dyed black bangs covered her eyebrows and most of her eyes, which expanded like moons when she talked.

"Here’s my number, here’s our neighborhood, tell me if you like the way it tastes." She jumped from the phone, to the map, to the shepherd’s pie, which she explained to me was called pastel de papas and back again. She seemed nice, kind, and engaging. But I bristled. I’d been living away from home, taking care of myself for three years at that point, and here was a complete stranger who, all of a sudden, was giving me a curfew, a phone, instructions on when and how often to call her. She insisted that she make me dinner every night of the week. "Don’t worry about groceries," she explained, "I’ll take care of you."

One night, my phone was dead and the thrill of being completely unplugged in Argentina was enough to keep me from fixing it. That, compounded with the excitement of having just moved to a foreign city, had me bounding down the sidewalk, novelty coursing through my legs like an electric spark. It was well beyond midnight and the unfamiliar, uneven streets shook me with promise. Unfamiliarity, for some, can be a powerful stimulus.

When I walked through the front door of Nora’s apartment, I found her sitting crossed-legged, cross-armed in the living room. Before I could register her body language, or even make out the worry on her face, she pointed a long index finger at me: “Where were you? You stayed out too late! I haven’t been able to sleep. You had me sick! Where’s your phone?”

“I’m sorry, my bad,” I responded in stuttered syllables, my already-broken Spanish further shattered by her reprimands. “I was walking around, I lost my bearings, my phone battery died, I’m fine, I’m fine, I was just walking around.” I tried to explain, but it seemed my apologies weren’t helping. She was shaken up and I felt bad.

”We’ll discuss more in the morning,” she said with finality, before slamming her bedroom door harder than I thought necessary. We went to bed that night with an icy gulf between us.

When I stepped gingerly into the kitchen the next day, she was sitting at the table reading a newspaper, sipping a mug of coffee. She had, spread in front of her, two pieces of toast, cream cheese, dulce de leche, jam, and a banana and invited me to sit with her.

“Here, have breakfast, it’s OK,” she cooed. “You’re fine, you’re not in trouble, but I need you to know that while you’re here in this country living with me, you’re my responsibility. I’m your mother, even if for just four months.”

Every day I came home from school to Nora, my de facto mother. She would ask me how my day went, what new word in Spanish I had learned, what time I would be hungry. When we sat to dinner, she would cart me across the Argentine palate. She made me the pasta her grandma had taught her how to make, the chicken her daughter always liked best. Meal after meal, she welcomed me into the family. Once I told her I liked polenta and she made it for me nine nights in a row. I developed a penchant for a version topped with sausages and red sauce that was then renamed in her culinary canon as el preferido de Valerio (Valerio’s favorite).

We would sit at the kitchen table long after dinner, as our cups of tea grew tepid, exchanging stories, hopes, dreams. Once I asked about her experience during Argentina’s brutal military dictatorship in the '70s when, as a law student, she watched the legislation she was studying collapse around her. She asked about my future, my expectations, my dream job, city, house, car. But also about my mother and my childhood.

A parent can mean many, many things. I was lucky enough to have a supportive, loving mother wish me a bleary-eyed goodbye at the airport in Texas. But what I wasn't expecting was Nora, as caring and as generous on the other end.

Living in a new city feels, in so many ways, like being a child again, traversing a playground of the unfamiliar. Parents help you navigate that sticky territory. They point the way or offer advice or stand by, silent but vigilant. Much like my biological mom taught me how to walk and how to tie my shoes and how to treat others, Nora helped me figure out my bus route. She taught me how to roll my Rs and how to greet strangers in a way that felt right, authentic, Argentine. She gauged my moods, stepping back ever so slightly if she detected an off-day at school. She asked how my tests went — and, later, what grades I got on them (sometimes in a way that felt a bit too close to home). The way a parent shapes the world for their child, she worked to shape this new one in which I had found myself, recounting history from her perspective, pointing me towards the empanada shops she thought were best.

Moms can be assigned or they can be chosen. And sometimes they can be a bit of both. What began as a random pairing through the chance of a housing lottery grew into something more cohesive, more cogent. It started to feel like home.

When my birthday approached close to the end of my four-month stay at Nora’s, she surprised me with a cake. It was the first birthday of mine we'd celebrate together —a nd probably the last — but she treated it with the attention and thoughtfulness of a mother who had raised me forever. As she sang, shrill verses echoing in her tiny kitchen, she pulled from the fridge a chocolate-dusted icebox cake. I later learned it was a chocotorta, an Argentine rite of passage. Layered with chocolate biscuits, thick cream, dulce de leche, and deep whispers of coffee, it was a simple, pantry-ready version of tiramisu. Any Argentine birthday party (or celebration, for that matter), is sure to serve chocotorta, and almost every kid has eaten one to commemorate another year around the sun.

This cake still oceans me back to that night, my first Argentine birthday, when I took a bite of chocotorta and wrapped Nora in a hug.

“Muchísimas gracias, madre,” I told her.