From Bluto Blutarsky to Donald Trump: The United States of "Animal House" at 40 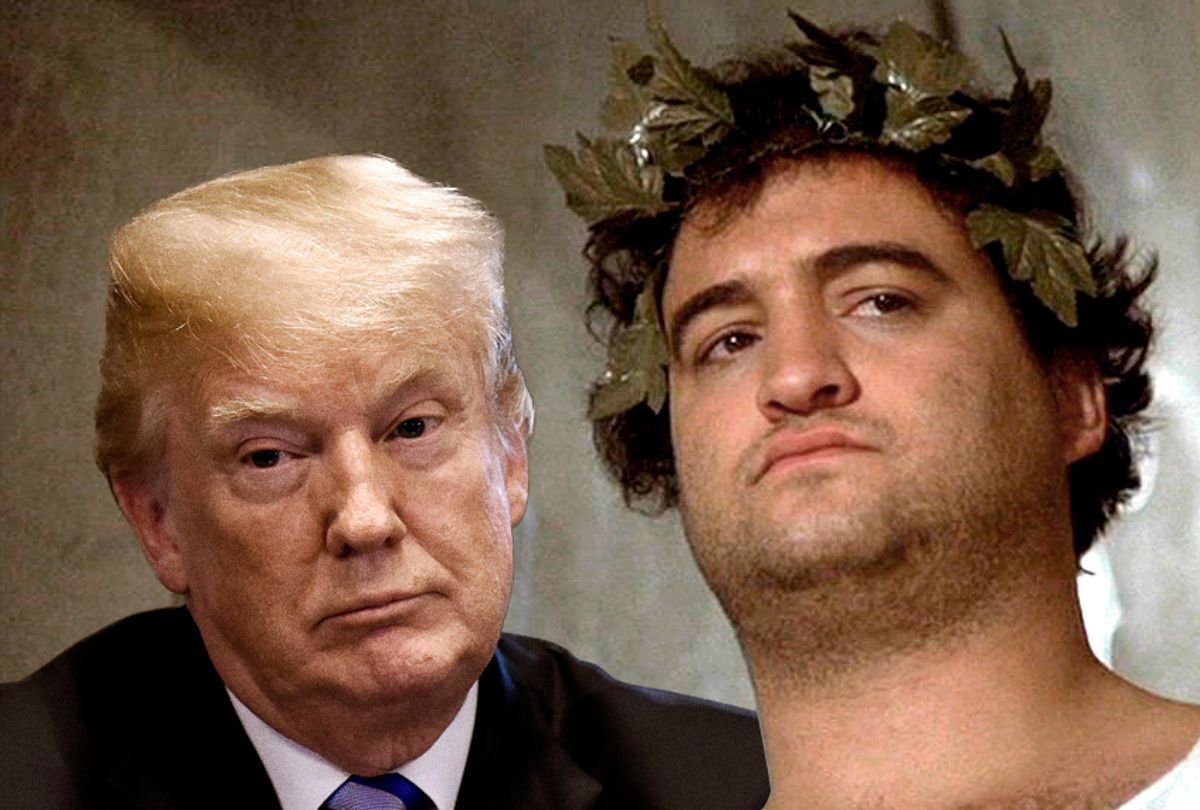 When "Animal House" was released 40 years ago on July 28, 1978, the low-budget, guerilla-style tale of campus anarchy struck a nerve with audiences, becoming the highest-grossing comedy in Hollywood history and exerting a powerful influence on the culture. While it is remembered mostly for its comedy, "Animal House" is also a political satire in the tradition of Mark Twain, Kurt Vonnegut and "The Simpsons," and its raucous, episodic narrative pokes a finger in the eye of America’s self-image.

Animal House’s most visible and immediate influence was the development of an entire sub-genre of raunchy coming-of-age movies, from first-generation imitators such as "Porky’s," "Police Academy" and "Revenge of the Nerds" to second-generation iterations such as "American Pie," "Old School" and "Van Wilder." All of these movies reliably echo situations and characters from "Animal House," but, more fundamentally, they tend to emulate the party ethos at the heart of "Animal House."

Off-screen, the film's iconic images of riotous party-going have provided a model of social behavior for generations of young men. Although "Animal House" did not invent campus party culture, it helped to codify it and to elevate it into a way of life. The real-world campus epidemic of binge drinking and rape culture is one indicator of the movie’s social impact.

The running meta-gag at the heart of "Animal House" is that, although the members of Delta house are all so different — the lady’s man Otter, the failed romantic Boone, the politician Hoover, the human black hole Bluto Blutarsky — they are all united by a single philosophy that the basic purpose of human life is to indulge as frequently and as single-mindedly as possible in the most immediate gratification presently available. The characters who share this consensus are the movie’s in-crowd, the ones who “get it,” and the movie’s villains are the characters who sublimate their biological urges into sadomasochistic regimes of order, like the elite Omega fraternity, or into the maintenance of their own power, like Dean Wormer, or into the militaristic discipline of Niedermeyer’s ROTC squadron. Throughout the movie, the Deltas wage a sustained terrorist campaign against these forces of regimentation (“every spring the trees are filled with toilet paper, every fall, the toilets explode”), a campaign that culminates with the assault on the Faber College homecoming parade at the climax of the movie. Within this context, the Delta’s parties themselves are political expressions of resistance to the dehumanizing expectations of American adulthood.

At the same time, however, the resistance campaign waged by the Deltas is decidedly apolitical. They indulge in anarchism with the same hedonistic abandon with which they throw toga parties — for the sheer thrill of trouble-making as an end in itself. Otter rallies his frat brothers to perpetrate their disruption of the homecoming parade by appealing to their sense of transcendent pointlessness: “I really think this situation requires that a really stupid and futile gesture be done on someone’s part!”

Set in 1962 but released in 1978, Animal House bypasses the campus activism of the late '60s and early '70s, drawing on the turbulent energies that roiled campuses during the intervening years but also editing out their political idealism and purging them of their ideological content. The rejection of the '60s is emblematized during the toga party when Bluto, annoyed by the earnestness of a folk singer, abruptly snatches the man’s acoustic guitar and smashes it into splinters against a wall. Bluto’s violent response to the folk singer expresses a visceral contempt for the idealism of a utopian counter-culture, while Bluto himself, an inarticulate nexus of blind appetites, stands for a more fundamental rejection of social values.

A more explicit rejection of liberal utopianism is depicted in the movie’s climax, which stages a re-enactment (or pre-enactment, since "Animal House" takes place in 1962) of the Kennedy assassination with the Deltas in the role of Lee Harvey Oswald, derailing the motorcade of Camelot with the nihilistic energies of their custom-made Deathmobile. The sequence ends with Kennedy’s head in tatters, the hands of interracial harmony sundered, the authority figures airborne and bereft of any foundation and chaos ascendant: a perfect representation of the post-modern, post-utopian condition of the late 1970s.

In the absence of any deeper political ideology, the members of Delta brothers fall back on the tribal values inherent in the idea of a fraternal organization as a source of social cohesion. The Deltas are depicted as more democratic than the elite Omegas since they invite the losers Pinto and Flounder to pledge, but their fraternity excludes the same “othered” individuals — the brown-skinned and handicapped outcasts — who had been sidelined at the Omegas’ pledge party. Although the Deltas are enthusiastic fans of black music — Otis Day and the Knights bring down the house when they play the Deltas’ toga party — the movie depicts an unbridgeable gulf between the frat brothers and actual black people when Otter, Boone, Pinto and Flounder wind up at a roadhouse where racial stereotypes about African-American men are played for laughs.

The roadhouse scene emphasizes the fact that the makers of "Animal House" are self-conscious about the whiteness of the Delta brothers, and the scene totters on the brink between satire of the racist stereotypes on display and endorsement of them. The scales tip decidedly toward promoting racist stereotypes in one of the movie’s crassest “gags.” When one of the women who has accompanied the Deltas to the roadhouse says she is majoring in “primitive cultures,” the scene cuts to a shot of Otis Day flamboyantly singing nonsense syllables in a way that suggests the racist insinuation that African-Americans are representatives of a primitive culture. In another scene, we see that a confederate flag hangs prominently in the bedroom of Hoover, the President of Delta house. The dis-uniting of the hands of interracial harmony at the end of the movie merely literalizes the entrenched segregationism at the heart of the movie’s ethos.

Sexism and homophobia also play pivotal roles as ingredients in the social glue that holds together the Delta brothers’ fraternal bonds. With the exception of Boone’s girlfriend, who is herself a stereotype of the long-suffering girlfriend, the female characters of "Animal House" are divided into the ditzy sorority airheads Babs and Mandy on one side of the spectrum and the cartoonish proto-feminists of Dickinson College on the other. Like the movie’s portrayal of African-Americans, the movie’s representations of women straddle the border between tongue-in-cheek satire and cynical exploitation. When Bluto climbs a ladder to peep in on bedtime at the sorority, the semi-nude pillow fight he witnesses is funny because of the way it satirizes male fantasies about what women do when they are alone together, but it also invites the male viewer to share in the voyeuristic fantasy, as Bluto explicitly does by breaking the fourth wall and arching a lascivious eyebrow at the audience. The frequent use of the word “homo” as an insult also serves to police the frat brothers’ sexual identity. For the post-utopian nihilists of "Animal House," the objectification of women and the denigration of homosexuals serve a similar social function as the promotion of racist discrimination, providing a common language to unify a community of straight white men.

Although "Animal House" is chiefly remembered as a comedy about college, the movie’s satire penetrates beyond the refined environment of the campus to target American culture more generally. The National Lampoon writers who collaborated on the script indicate as much when Otter protests to Dean Wormer that “if the whole fraternity system is guilty, then isn’t this an indictment of our educational system in general? I put it to you Greg — isn’t this an indictment of our entire American society?” Otter’s conflation of Delta house with America inspires his frat brothers to spontaneously hum the Star-Spangled Banner, suggesting that the Deltas’ racism, sexism and homophobia, as well as their self-interested hedonism and anarchistic nihilism, are deeply rooted in the American character. The enduring popularity of "Animal House" reflects the extent to which audiences respond viscerally to its funhouse-mirror representation of postmodern American manhood.

From our perspective 40 years later, it is easy to see that the movie’s “national lampoon” of white male tribalism lashing out indiscriminately at pillars of social order remains relevant. In the 1980s, the glib amorality represented by Otter would become a signature posture among avatars of yuppieism such as Alex P. Keaton, Patrick Bateman and Donald Trump, figures for whom the ethos of naked self-interest would come to occupy the vacuum left by the collapse of any other shared cultural values. Supporters of Donald Trump would likely delight in imagining the 45th President as the driver of the Deathmobile, giddily ramming into the parade of liberal progress personified by President Kennedy, derailing the course of interracial reconciliation and basking in the resulting chaos.

The movie’s final laugh, however, is on us, the audience inheriting the world that is left in the wake of the Deltas’ assault on the motorcade of postwar progress. "Animal House" ends with a series of captions revealing what became of the movie’s characters in the years between 1962 and 1978, and the characters’ fates are intertwined with the social upheavals of the age: Niedermeyer is killed in Vietnam, Marmalard is arrested for his involvement with the Nixon White House, Katie and Boone get divorced and, as a crowning piece of satire, Bluto becomes Senator Blutarsky. The Deltas’ terrorist campaign against progress, authority and reason itself has succeeded and we are left among the ruins. Despite its many imitators, "Animal House" remains unparalleled in the infinite cynicism with which is pronounces the failure of the post-war American project. What is there left to do but laugh?

Randy Laist is an Associate Professor of English at Goodwin College. He is the co-editor of "Cinema U: Representations of Higher Education in Popular Film," which will be available soon from Fourth Horseman Press. He is also the author of "Cinema of Simulation: Hyperreal Hollywood in the Long 1990s."