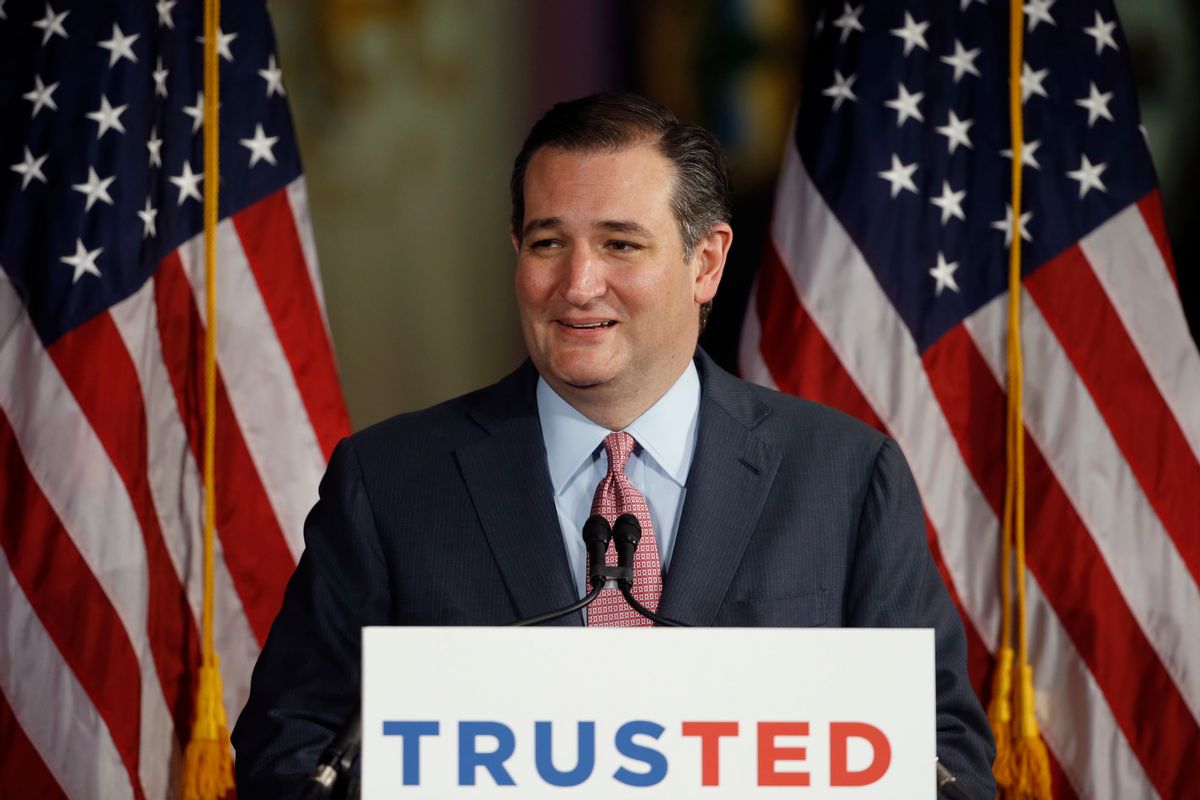 Alex Jones has made a career out of unhinged conspiracy theories. The right-wing commentator has propagated speculative tales ranging from the offensive to the outlandish. He has told his audience that the Sandy Hook shooting was a false flag operation perpetrated by the government. He also said that a pizza shop in Washington, D.C. was housing a Democratic sex ring.

One of his favorite conspiracies is that Senator Ted Cruz's dad carried out the assassination of John F. Kennedy. That did not stop Cruz on Saturday from defending the wounded conspiracy theorist on Twitter.

YouTube issued a strike Wednesday against the InfoWars founder for violating its community guidelines. The video hosting website flagged four videos and subsequently blocked them from users, Mashable reported.

In response to the punishment, Jones relayed to his fans that they could watch the banned videos on another social media platform: Facebook. The next day, Facebook suspended Jones for 30 days.

On Saturday, an unlikely ally spoke out against the censuring. Cruz suggested in a tweet that the suspension violated the spirit of the First Amendment.

Am no fan of Jones — among other things he has a habit of repeatedly slandering my Dad by falsely and absurdly accusing him of killing JFK — but who the hell made Facebook the arbiter of political speech? Free speech includes views you disagree with. #1A https://t.co/RC5v4SHaiI

Social media companies have received heavy scrutiny in recent months for allegedly censoring right-wing voices. Many congressional Republicans, for example, have accused Twitter of "shadow banning" conservatives on the platform. Cruz is just the latest Republican to call this a First Amendment issue.

His tweet on Saturday confused legal experts, considering the First Amendment applies to government regulation of speech. As a private entity, Facebook has the right to curate what can and cannot appear on its website. Cruz knows this. He lambasted NFL players for their peaceful protests against police brutality. Cruz tweeted in late 2016 that athletes should "stop insulting our flag, our nation, our heroes."

Cruz was not alone in this sentiment, or the solid legal standing he enjoyed. Many legal experts, including those were sympathetic to the NFL players' cause, acknowledged that the NFL had the right to regulate what the players could do on the field. Nevertheless, in the eyes of Cruz, it sounds as if free speech doesn't always include "views you disagree with."

Cruz's tweet on Saturday agitated many of his critics.

Who the hell made Facebook the arbiter of what appears on Facebook? Good thinking, Senator. https://t.co/z9YqwL5xWW — southpaw (@nycsouthpaw) July 28, 2018

The #1A free speech clause doesn't apply to Facebook's terms of service. Nor does it protect scammers and propagandists from being held accountable. You know this, and yet you're lying to your followers to protect a Sandy Hook denier. Why? https://t.co/GqukjiKESa

Many political commentators and journalists noted that Cruz knows exactly what he is doing here. He's not advocating that Facebook be treated as a public utility. He is, however, placating Alex Jones' base in the hopes of currying votes this November.

Well, no. He does. He knows he's hurling insipid nonsense here. He’s talking to the rubes. The suckers.

The voters he exploits to gain power, which he then turns around and uses to hurt them. https://t.co/R4hTZtB38Q

Cruz's strategy pre-2016 was to court conservative activists with his anti-ObamaCare/Obama stunts like shutting down the government/his filibuster. It blew up when Trump totally changed the game and outmaneuvered him. He's betting this is the new path to go with. It's not dumb. — andrew kaczynski (@KFILE) July 28, 2018

If Cruz's defense of Jones reeks of desperation, it might be because the Texas senator is desperate. A poll from June showed that Cruz was only up five points on Democratic challenger Beto O'Rourke. The poll from the University of Texas/Texas Tribune found that 41 percent of Texans say they support Cruz, compared with 36 percent who are backing O’Rourke.

While Cruz may genuinely feel unsettled about Facebook's decision to suspend Jones, the social network has already addressed the situation.

A Facebook spokesperson told Mashable that the social network imposed a 30-day ban for Jones after it determined he had violated Facebook's Community Standards.

"Our Community Standards make it clear that we prohibit content that encourages physical harm [bullying], or attacks someone based on their religious affiliation or gender identity [hate speech]," a Facebook spokesperson said.

"We remove content that violates our standards as soon as we're aware of it. In this case, we received reports related to four different videos on the Pages that InfoWars and Alex Jones maintain on Facebook," the spokesperson continued.