Astronomers have seen a star’s light redden as it passed our galaxy’s central black hole, as predicted 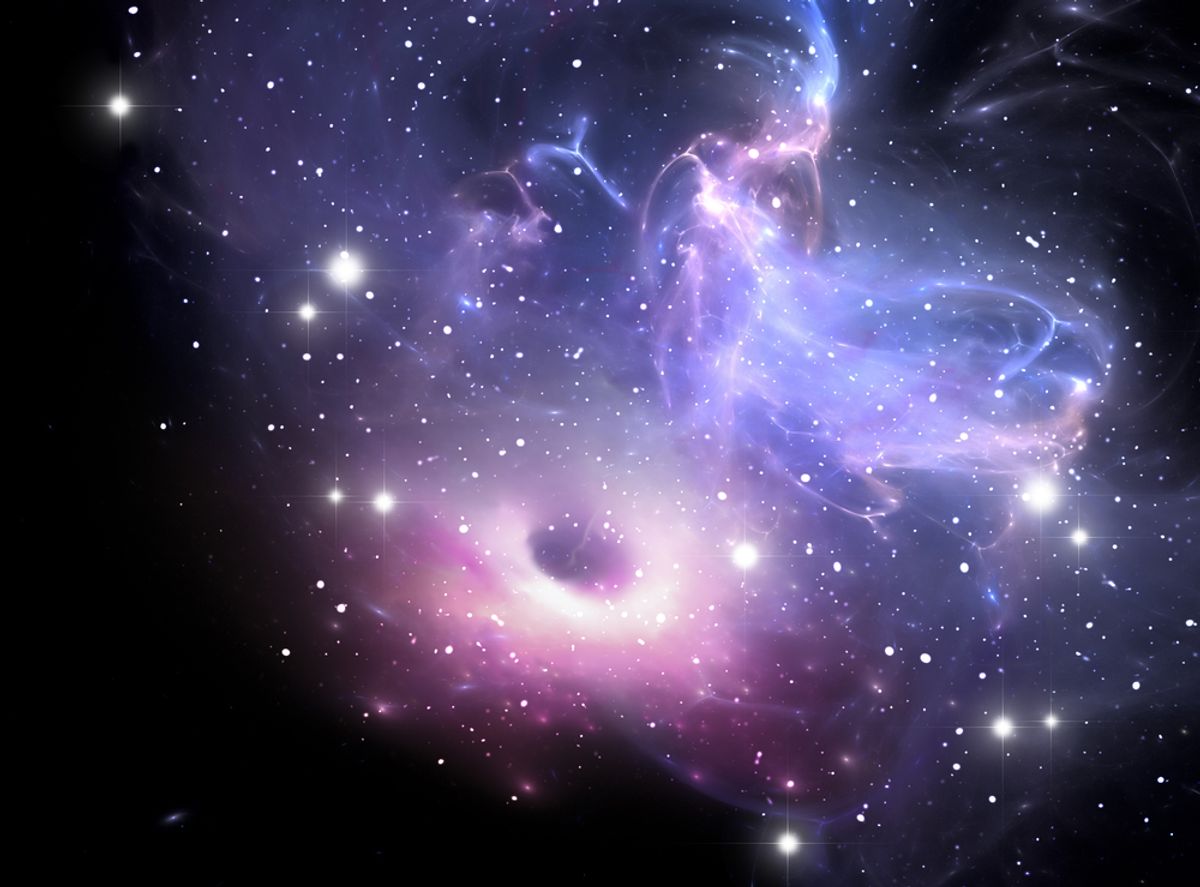 Scientists have Einstein right where they want him.

Today in Garching, Germany, Reinhard Genzel (Max Planck Institute for Extraterrestrial Physics, Germany) and his colleagues announced that they have detected the shift in a star’s light caused by the extreme gravity of the black hole at the center of our galaxy. This change, called gravitational redshift, is one of the long-sought confirmations that Einstein’s master framework of gravity correctly describes how the universe works.

As I detail in our upcoming September issue, roughly three dozen bright stars huddle very close around the supermassive black hole in the Milky Way’s heart. Both Genzel’s team and a second led by Andrea Ghez (University of California, Los Angeles) have been observing this cluster of stars for more than two decades, using the stars’ orbits to calculate the mass of the unseen thingamajig lurking among them. It’s this work that gives us our estimate of the black hole’s mass: about 4 million times that of the Sun, all contained within a radius 8% the size of Earth’s trek around our star. 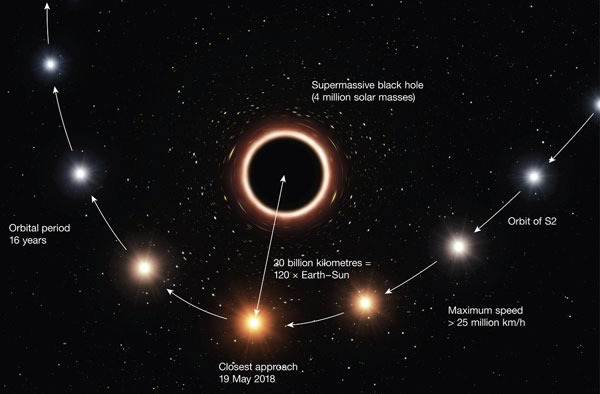 This artist’s impression shows the path of star S2 took as it swung by the supermassive black hole at the center of the Milky Way. As the star approached the black hole, its light had to fight the black hole's immense gravitational field. The light lost energy in the process, causing the star's color to shift slightly to the red (exaggerated here for effect). Object sizes are not to scale. ESO / M. Kornmesser[/caption]

The brightest member of this troupe of stars is called S2. It’s a 7-million-year-old massive, bluish B-type star that weighs about as much as a dozen Suns combined. It finishes its racetrack course around the black hole every 16 years. During its closest approach it comes closer to the black hole than any other star yet detected: about 120 a.u., or four times Neptune’s distance from the Sun. Its latest pass was earlier this year in May.

S2’s flyby enables two tests of general relativity. The first is the gravitational redshift, a preliminary detection of which is announced today. In Einstein’s general theory of relativity, gravity is geometry. Mass and energy create curves in the fabric of spacetime, somewhat like objects do when set on a taut rubber sheet. All matter makes dips — some more pronounced than others — in the cosmic sheet. Anything traveling through the warped region has to navigate the curves in the spacetime landscape. Even light has to follow gravity’s detours.

As S2 bore down on the black hole, it dove further into the broad, deep well the black hole creates in the fabric of spacetime. Its photons had to climb out of the well in order to reach us. This climb robbed them of energy, shifting them to longer, redder wavelengths. 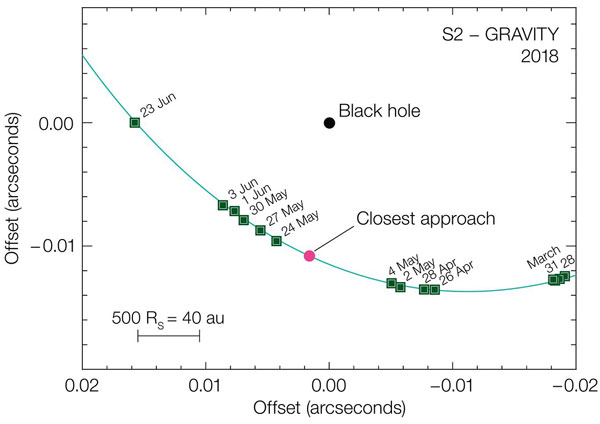 This diagram shows the motion of the star S2 as it passed close to the black hole, based on data from the Gravity interferometer. At this point the star was traveling at nearly 3% of the speed of light. ESO / MPE / GRAVITY Collaboration[/caption]

But the change is a relatively small one compared to the more prosaic one expected from Newtonian gravity. In Newton’s framework, S2’s light should also shift redward due to the star’s dramatic motion along our line of sight as it makes its turn coming around the black hole. The change manifests as a swing of several thousand km/s. The relativistic redshift, in contrast, only adds about 200 km/s.

To see this smaller, gravitational redshift, astronomers need to have the star’s orbital motion exquisitely pinned down. That’s hard to do that when your target is some 26,000 light-years away, veiled by dusty gas and surrounded by other fuzzy-looking balls of light. Images of the galactic center look like a psychedelic polka-dot fabric in which all the dots move.

Furthermore, images only give us a flat perspective; they don’t reveal the third dimension. That comes from measurements of the stars’ motion along our line of sight, or radial velocity.

There are thus three key moments in S2’s breakneck turn around the black hole, all of which tell you something about the 3D encounter unfolding. One is when the star’s motion away from us along our line of sight suddenly skyrockets. After the radial velocity begins to plummet, the second key moment happens, when the star reaches its closest approach to the black hole as seen in “flat” images. The third moment is when the star’s motion stops its headlong plunge right at us and starts slowing down along our line of sight. The first and second moments occurred in May; the third is estimate to come this September.

Midway Through the Pass

Both the MPI and UCLA teams have been amassing observations for 20-plus years to give them what they need to track S2’s motion with enough precision to see the extra redshift blip from general relativity. As part of that work, Frank Eisenhauer (Max Planck Institute for Extraterrestrial Physics) and colleagues built an interferometry instrument called Gravity.

Gravity combines the four 8.2-meter telescopes of the Very Large Telescope in Chile into a single superscope, with an equivalent diameter of a whopping 130 meters. At near-infrared wavelengths, that boosts resolution by more than a factor of 10 over what was previously possible, enabling the team to watch S2’s motion from night to night. The feat is comparable to using the VLT to watch a soccer match on the Moon and seeing the ball’s trajectory with an accuracy of 6 centimeters, said Françoise Delplancke (ESO) during a press conference.

By combing data from Gravity with images and radial velocity measurements taken over the course of S2’s 16-year-long orbit, the European team says they’ve successfully detected the extra blip. It looks like this. 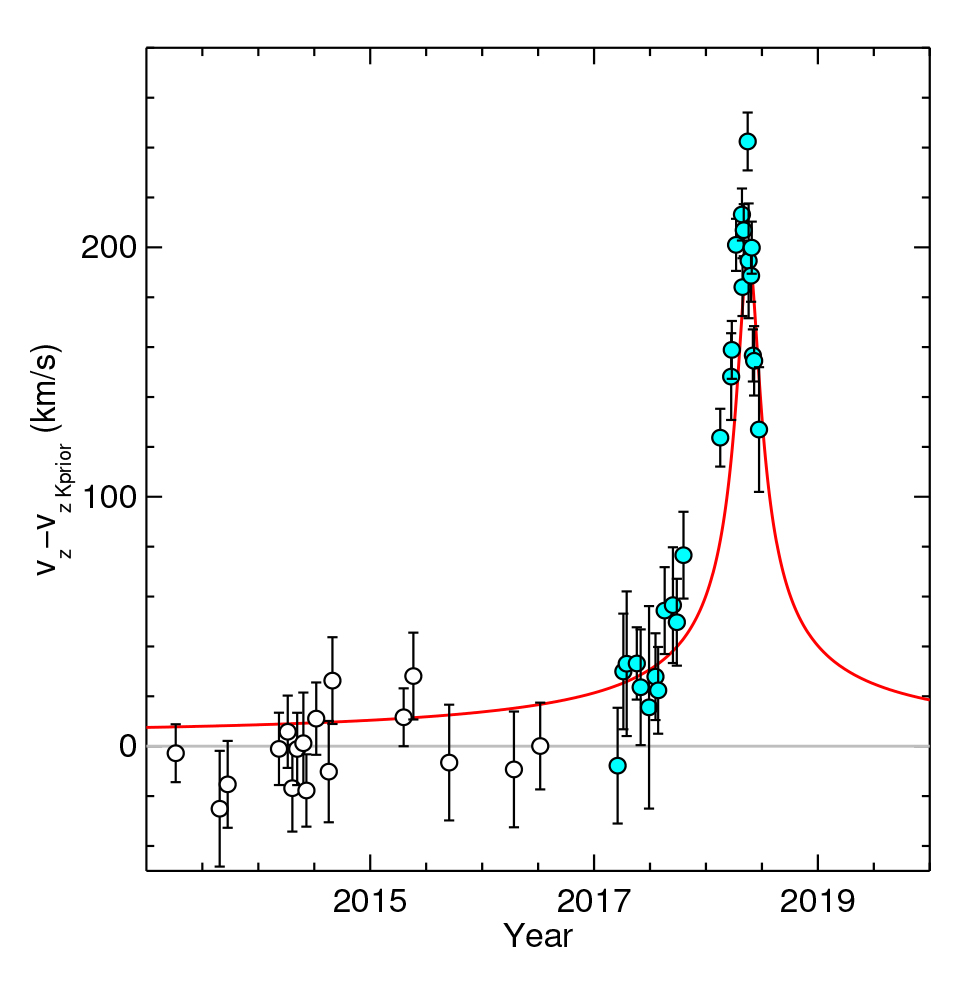 The game’s not over yet, though. That blip is only as believable as the underlying data it sits on. To be sure, astronomers need the third part of S2’s pass, which is now starting to show up in the radial velocity data — in fact when I spoke to Ghez on the phone this morning about the result, she was heading for the airport, about to fly to Hawai‘i to point one of the Keck telescopes at S2.

“I’m delighted for them,” she says sincerely. “I think Gravity is an amazing instrument.” The beauty of having two teams with different instruments and approaches working on the same thing, she explains, is that combining their results makes the science better. But she really wants to see what happens at the final turn in the radial velocity before assessing what her own data are telling her.

The teams are using S2 to test a second relativistic prediction. In general relativity, there are no closed orbits. Just as Mercury precesses around the Sun, drawing out cosmic Spirograph stencil patterns, so too should S2 spiral around Sgr A*. In S2’s case, the precession is about 12 arcminutes per orbit.

Measuring this shift is immensely challenging. But Genzel’s team thinks they’ll have the data to see it in the next year or so. If and when either team does see it, it’ll be another win for Einstein.