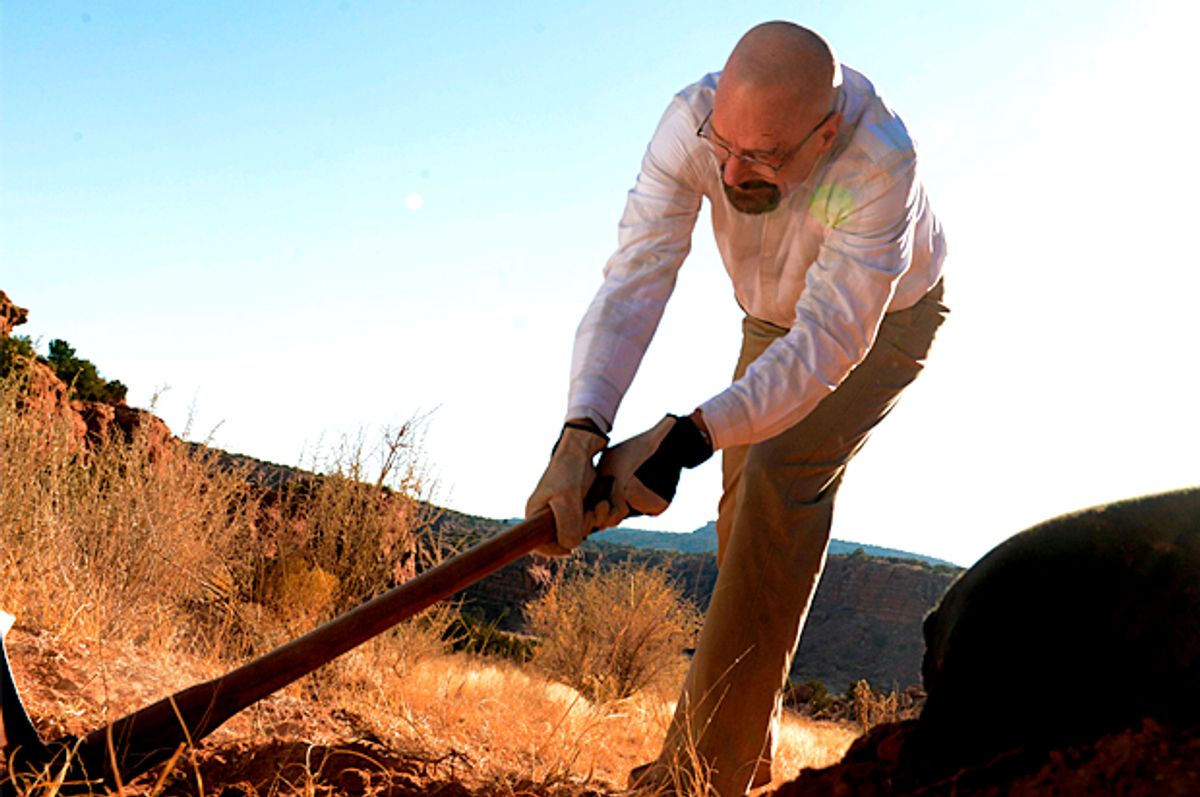 Is there an AMC Creative Universe? The cast of “Breaking Bad” and creator Vince Gilligan held a reunion on Thursday at San Diego Comic-Con to celebrate the 10th anniversary of the landmark show’s premiere. Among the questions asked by fans: Could there be any truth to the rumor that “The Walking Dead” lives in the same world as “Breaking Bad”?

Here’s the idea: Walter White’s blue crystal meth may have eventually triggered the zombie apocalypse. (It came out of an Easter egg on “Fear the Walking Dead,” which, in one episode, featured a song from “Breaking Bad” — “Negro y Azul: The Ballad of Heisenberg.”)

“I love that theory,” Gilligan said. “That was a kick. They’re two great shows, ‘The Walking Dead’ and ‘Fear the Walking Dead.'” Star Bryan Cranston quipped that he liked the idea as well: “Walt is dead, so he could be a zombie right now. Heisenberg zombie! My agents are out here, we should talk.”

“When we started we were just a little show in the high desert of New Mexico,” Cranston said. “I knew we started to make an impact when the [production] directional signs started to be stolen, in our second or third season. Not only am I getting lost, but something is happening. The dynamic was changing.”

Cranston and Paul credited the appearance of the AMC hit on Netflix, where more viewers found it and gave it a binge. But Gilligan said he actually first felt that the show had made it after Cranston won an Emmy for playing Walter White after Season 1.

“I jumped up and hit my hands together so hard, as soon as I went home I had to put them in ice water,” Gilligan recalled. That was early validation, because “you don’t want to be the ‘Hogan’s Heroes’ of meth shows. It felt like, if the show was going to be about producing and selling meth you want to take it seriously. But you don’t want to make it an ‘Afterschool Special.'”

“If you’re choking someone to death with a bicycle lock you want to show how agonizing that would be,” he added. “You don’t want people thinking its just popcorn and entertainment. There always had to be consequences on the show. Failing that, you’re not doing the audience or the show justice”

The stars have reunited several times recently, including on the Sony lot, where the infamous meth cooking RV is on display. Paul said he still missed his character, Jesse Pinkman. “I love that guy so much. He was a big part of me. I miss you all, I miss the show.”

Cranston and Paul won’t be seen in Season 4 of “Better Call Saul,” but Gilligan hinted it would be a shame if they didn’t show up before the end of that series’ run.

The cast also remembered how frantic they were in wondering whether their characters would live to see another episode. In particular, Gilligan recounted how the show had originally planned to kill Jesse off after Season 1. But they quickly changed their mind: “It was such a no-brainer, not to kill off this beautiful young man,” he said.

But that didn’t stop Cranston from torturing Paul throughout the series run. “I’d get ahold of a script, even if I didn’t read it, and I’d walk over to Aaron,” Cranston recounted. Paul picked up the story: “He gives me a really long, exaggerated hug. ‘Hey man, it’s been a fun ride. You read the script, right?’ ‘No.’ And then he just runs away!”

Will Paul and Cranston work together again? A fan suggested a “Malcolm in the Middle” reboot, but Paul plays Cranston’s long-lost son. “I would be so down!” Paul said. Cranston? “Yeah, not so much.”