Panic on Team Trump: Is Robert Mueller closing in on criminal conspiracy charges?

As Rudy Giuliani spins a story no one can follow and his boss melts down on Twitter, intriguing hints emerge 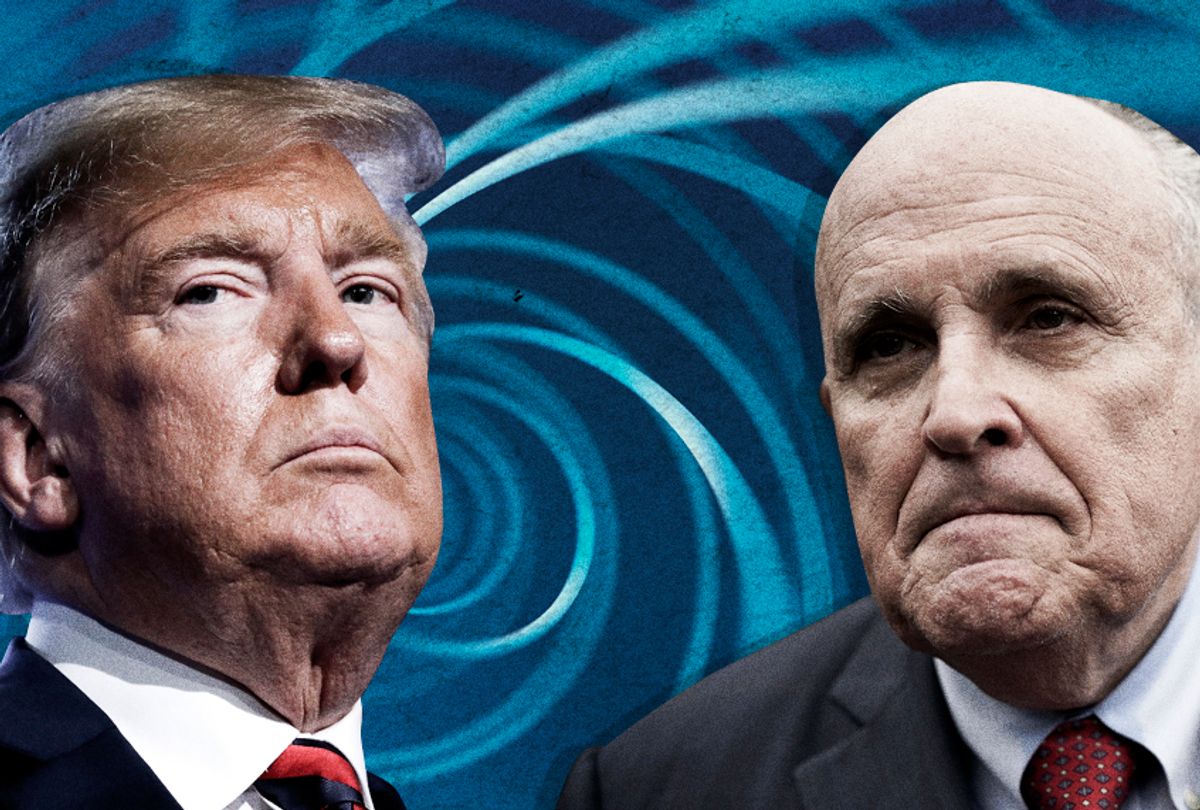 As the whole world knows, CNN reported last Thursday that Michael Cohen was prepared to testify that Donald Trump knew in advance about the June 2016 meeting at Trump Tower with Russian emissaries supposedly bearing dirt on Hillary Clinton. And ever since then, the atmosphere around the Russia scandal has changed. If there is any real evidence that Trump knew about that meeting and approved it, it goes a long way toward proving one element of a criminal conspiracy that includes the president of the United States and confirms many other suspicions surrounding that event.

On the other hand, this is Michael Cohen we're talking about. He's not exactly a stellar witness (at least not yet), and the CNN story said all this was based solely on Cohen's word that he had witnessed Trump being told about the meeting before it happened, which makes the assertion less than airtight. Still, Trump and his lawyer Rudy Giuliani both immediately lurched into high gear.

Giuliani appeared with CNN's Chris Cuomo that night and said that Cohen had "been lying all week, he's been lying for years," calling him "the kind of witness that can really destroy your whole case" because he's a "pathological liar." The gloves were obviously off.

Trump has refused to take any questions about the latest Cohen charges, but he had an epic Twitter tantrum about the Russia investigation over the weekend, starting on Friday:

Trump moved on to bragging about his "accomplishments" and saying that his poll numbers are better than Abraham Lincoln's. He complained that Democrats are refusing to help him pass legislation and, of course, ranted about "Trump Derangement Syndrome" and the media. Then he really got hysterical:

The "nasty, contentious business relationship" apparently refers to the fact that Mueller once belonged to Trump's golf course and asked for a refund. You can understand why the president believes that only his ardent supporters should be allowed to investigate him, since that's worked out so well for him in the House Intelligence Committee chaired by Rep. Devin Nunes. The rest is sheer hysteria, which his social media people apparently tried to bury with a flurry of anodyne tweets on Monday morning.

But that's when the fun really began. Rudy Giuliani appeared on "Fox & Friends" and then on CNN, in response to the Cohen allegations. Then he had to call in to both networks by phone later, to try to explain what in the world he had said in his earlier appearances. In the course of all this, Giuliani suggested that Cohen had doctored the tape in which Cohen and Trump discuss paying for Karen McDougal's silence -- and then went on a tear explaining that collusion is not a crime, as if he had suddenly decided to abandon Trump's tiresome mantra of "no collusion!"

That last bit seems to be a crafted talking point, since Trump defenders, including Chris Christie, had gone on the Sunday talk shows to make that argument.

Nobody has ever claimed that "collusion" is the technical legal term for what Trump and his minions are suspected of doing. It's simply a description of their behavior. The legal term is "criminal conspiracy." I would guess that Trump's team has now ensured that the media will use that latter term from now on, which may not be the outcome they were looking for.

Giuliani claimed that the crime was the hacking of Democratic Party emails, which Trump didn't personally do and didn't pay for, which seems like an awfully specific  denial. But all that craziness was only the half of it. Giuliani spoke at length about Cohen's supposed accusation that Trump knew about the Trump Tower meeting. That's when it emerged that there were rumors about another meeting on June 7, 2016, two days before the one with the Russian emissaries. Giuliani characterized that earlier gathering as some sort of pre-strategy meeting that included Paul Manafort, Jared Kushner, Donald Trump Jr., Deputy Campaign Manager Rick Gates and one other person he couldn't remember.

It was an extremely confusing storyline, which Alisyn Camerota of CNN couldn't make heads or tails of, as you can see:

Giuliani later called in to both Fox and CNN to "clarify" what he was trying to say. The upshot (I think) is that Giuliani believes Cohen will say that he was in the room with Donald Trump when Don Jr. popped his head in to tell his father about the upcoming meeting with the Russians. Giuliani says this never happened and Cohen is a liar. Then he said that the press had also inquired about this earlier meeting on June 7, which he indicated was being shopped around by Cohen's lawyer Lanny Davis even though Cohen wasn't reported to have been present. Giuliani said the press wasn't going to publish anything on this supposed meeting because it couldn't be corroborated.

This is, of course, ludicrous. Giuliani would not have brought this up if he didn't believe it was going to come out. At one point he even admitted that he was trying to get ahead of the story. He did it clumsily, but the significance of this alleged earlier meeting is clear enough. June 7, 2016, was the day when Donald Trump won the California primary and said this in his victory speech:

I am going to give a major speech on probably Monday of next week and we’re going to be discussing all of the things that have taken place with the Clintons. I think you’re going to find it very informative and very, very interesting. I wonder if the press will want to attend, who knows?

Anyone who's been following this story has known that the odds of Trump not knowing about this meeting with visiting Russians were nil. If there is now some corroboration of a "pre-strategy" meeting to discuss this matter, and that later that night Trump went out and telegraphed that he knew about it, it only adds to the suspicions. Moreover, if that meeting happened with the people Giuliani named, there is almost certainly corroboration: Manafort's former deputy, Rick Gates, is cooperating with Robert Mueller. Whether Gates can say for sure that Trump was told about the Russian meeting is unknown. But something has Giuliani and Trump jumping out of their skin.

Giuliani says that Cohen's team has been shopping this June 7 meeting to the press. But former Assistant U.S. Attorney Daniel Goldman has another theory. He believes that Manafort's lawyers have now seen Gates' testimony and have given the Trump team a heads-up:

If, as Goldman suspects, they're now privy to everything Gates has told Mueller, it would certainly explain the sense of barely contained panic we've seen these past few days. Remember, Gates remained part of the Trump team well into 2017.