Trayvon Martin's parents tell Salon: "Nobody is being held accountable" for racist violence

Sybrina Fulton and Tracy Martin discuss the 6-part TV documentary on their son's life and death, "Rest in Power" 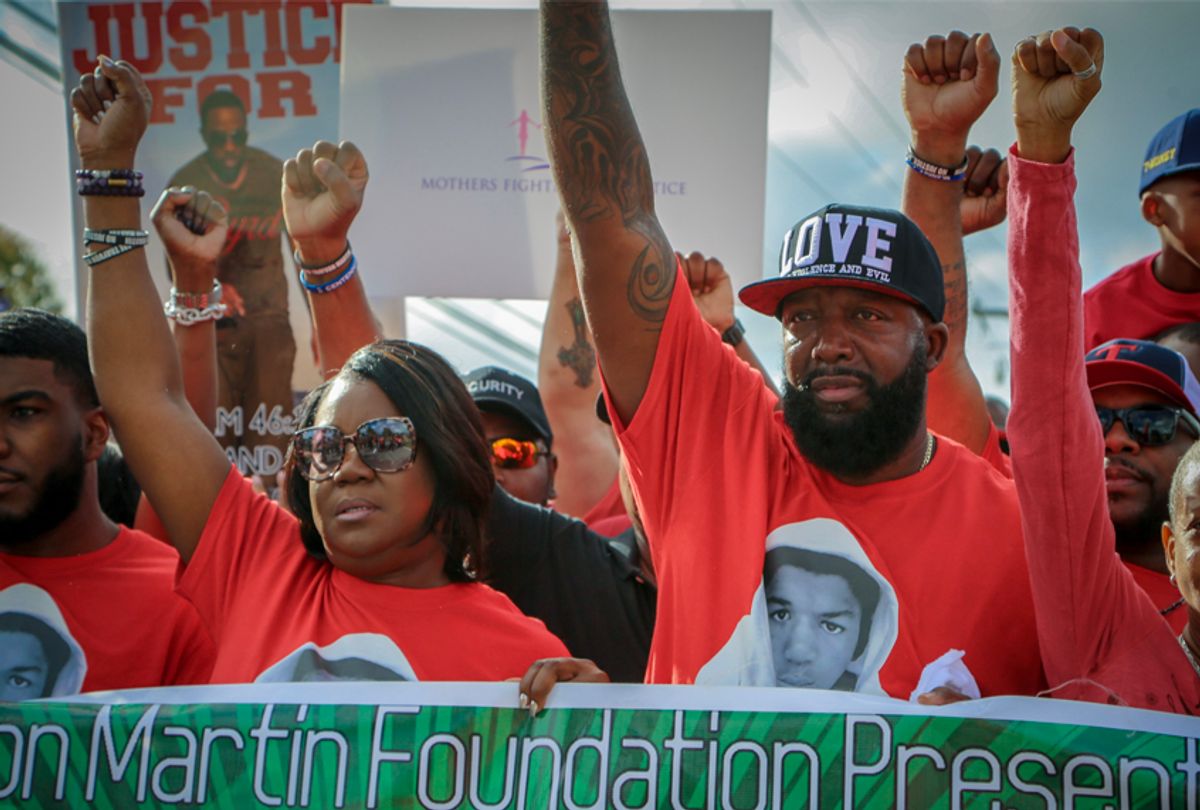 Imagine you have a teenage son. He's smart, funny and you can see your face when he smiles. You guys have the same nose and giggle, so similar that even a stranger would be able to tell that he inherited that from you. Your son is cool and well liked, but he's also a teenager, meaning he sometimes does the goofy things that teenagers do like joke around on social media or get suspended from school, just like you did before you buckled down as you entered adulthood.

Your son loves sports. He excels as an athlete, gaining respect from his high school and his peers. He also likes to watch sports, debate it with his friends, probably imitate the moves he sees made by the greats – the LeBrons, the Wades and the Melos. Like most teenage boys who love sports, he watches the greats perform those moves on the biggest stage – the NBA All-Star Game. While he's enjoying that game, your son craves a snack and heads out to the convenience store for a pack of Skittles and an iced tea.

"It's easier to be evil than good"

He didn't run away. He didn't get arrested. You see, on his way home he was followed by a coward with a gun, a man who called the police on your son for no reason other than the color of his skin. The cops told the armed coward to leave your son alone. He ignored them because he had a gun and racism on his side. (Even if he, himself was only partly white.) He picked a fight with your son, who was just trying to get back home and watch the game. At some point during the exchange with your son, the armed coward shot your son through the heart. Your son was black and the coward was not, so the police refused to arrest him until your son's killing became a national story. You're proud that the world is standing up for your son -- even the LeBrons, the Wades and the Melos he looked up to now honor his name. But you are hurt that a collection of racists is supporting the coward, disrespecting you and your family every night on television. The coward is eventually arrested, but whisks through the system, receiving bail after lying about his financial situation. People with love in their hearts from every part of the world are fighting, organizing and praying that your son gets justice. Eventually, the coward gets his day in court, before an all-white jury. They find him not guilty because there's nothing wrong with killing your son or any other black boy in America. After the coward walks, he continues to obsess over your son's death. He brags and gloats in the way that only small-minded people can. He clings to his gun, threatening to kill other people. The coward's supporters see nothing wrong with this. The same people who demonized your son for being a teenager with black skin see nothing wrong with this. Every element of Trayvon Martin's heartbreaking story, from his childhood up to his untimely death at the hands of George Zimmerman and the national outrage that followed, is captured in Paramount Network's new six-part documentary series, "Rest in Power: The Trayvon Martin Story." (It's from Shawn Carter and the Peabody Award-winning producing team behind "Time: The Kalief Browder Story.") Trayvon Martin's parents, Sybrina Fulton and Tracy Martin, sat down with me in Salon's New York studio for a conversation about the TV documentary and why the story of their son's death more than six years ago remains so important in the Trump era. There are some people, said Fulton, who "want things back the way they were with slavery and with them oppressing us. And so [they] pretend like they don't know what's going on, but really, they do know. . . . They know that people are being killed unjustly, unarmed people are being shot and killed and nobody is being held accountable. They know about the gun laws, they know about the guns that are being sold, they know about the court system and the laws because they created all of those things." "They have a better concept than we do. We're just understanding now why so many of us are being shot and killed, but they know. Trust me." An explosion of Confederate-flag waving, race-baiting, hateful people emerged on the scene after Martin's death. Fulton said she fears that the violence could spread but believes it will cease when the other side starts losing people: "When they lose a family member, then trust me, they'll understand." "I think we're moving in the right direction, in terms of the conversation," Tracy Martin added, "What America has a problem with is the violence that's associated with racism. We might have gone back a few steps in terms of how people view us and . . . in terms of this administration. People are having a conversation about racism, but we still have a long way to go." You'd think the race problem in this country, and especially the way African-Americans are policed, could be changed with all the enhancements in technology. We have certainly seen more unarmed African-Americans being executed on camera, but most cops still are not charged or convicted, and our president seems to be committed to taking us backward, erasing all the progress we've made. We are lucky to have Tracy Martin and Sybrina Fulton, who have used their traumatic experience – first in their book and now in this documentary series -- to show the enduring ugliness that still exists in this country, the urgent need for change and the hope that we can heal.