Reporting on Bernie Sanders' "Medicare for All" is deeply flawed: Media forgets how math works

Many publications touted the startling cost in a libertarian study, without noticing that even that saves money 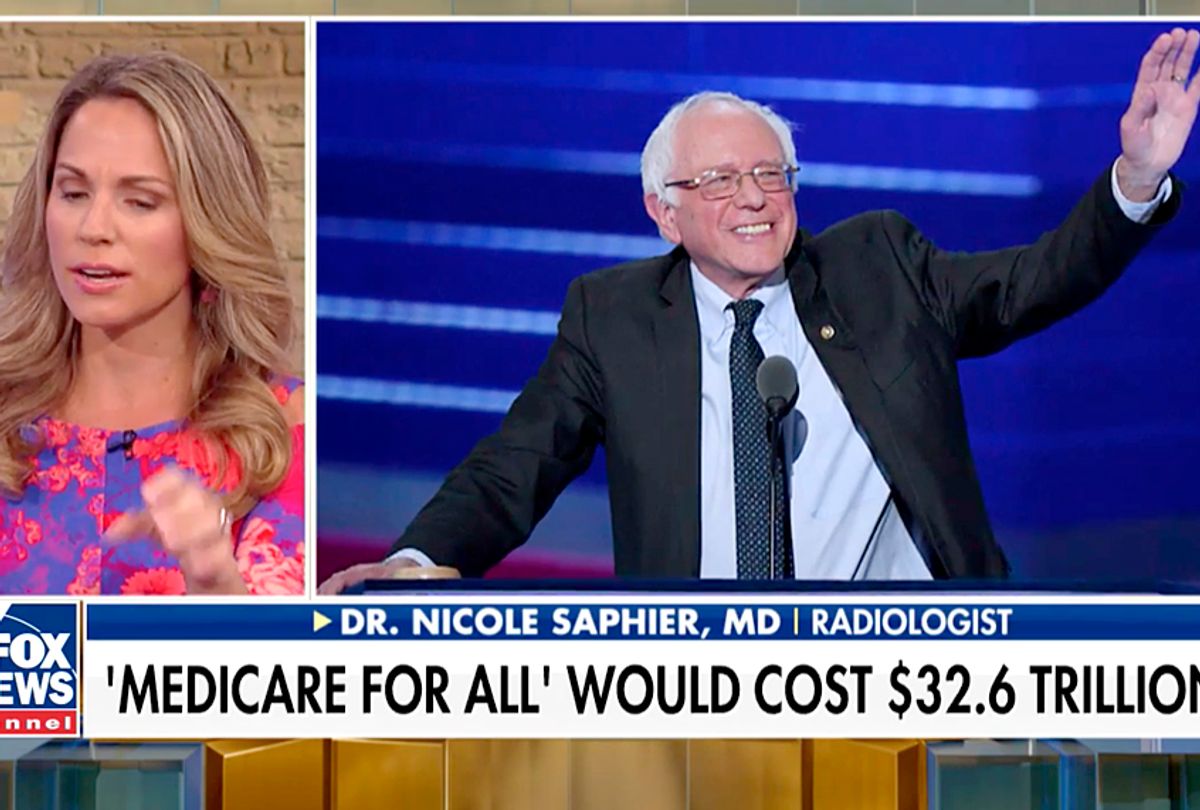 “Medicare for All,” a federally funded universal health care plan championed by Sen. Bernie Sanders, I-Vt., has quickly become a key issue for progressive voters evaluating Democratic Party candidates for the 2018 midterm elections and the 2020 presidential race. The plan would provide coverage for the 40 million currently uninsured in the United States, a gap that is estimated to cause tens of thousands of deaths annually. Despite this, Medicare for All has received no shortage of negative coverage in the media, all revolving around the same question: Just how are we going to pay for it?

A study on the cost of Medicare for All was recently conducted by Charles Blahous for the libertarian-leaning Mercatus Center at George Mason University. Blahous’ study projected that Sanders’ Medicare for All system, assuming it was enacted in 2022, would cost the federal government a whopping $32.6 trillion in excess spending over the course of 10 years. 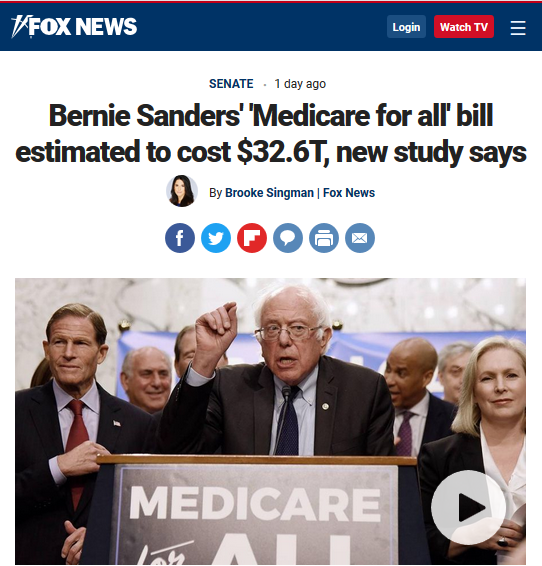 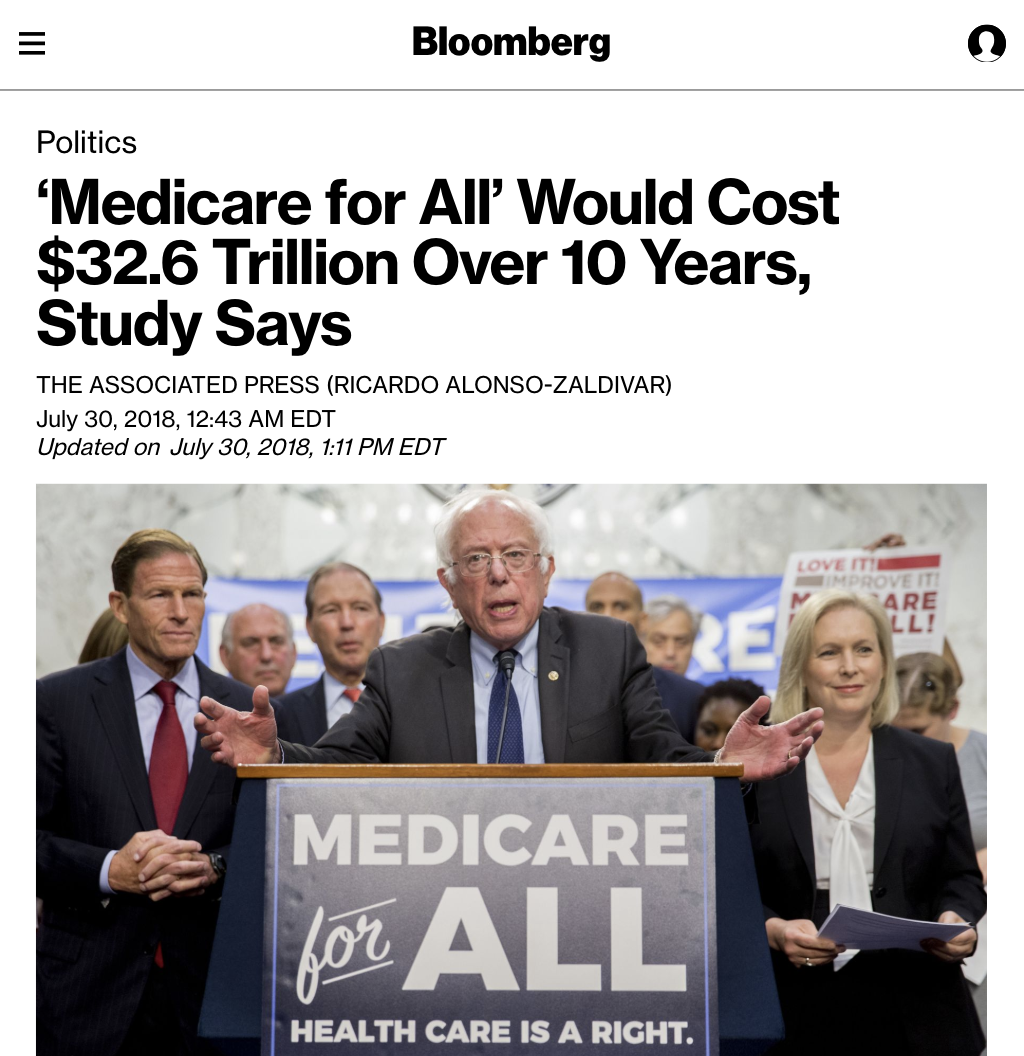 A number of major media outlets also re-published a story by Ricardo Alonso-Zaldivar of the Associated Press that focused on the study:

However, these scary headlines missed an important point in Blahous’ study: In terms of total (federal, state and private) spending on healthcare, Sanders’ Medicare for All plan is actually projected to cost $2.1 trillion less than projections of spending under the current U.S. health care system.

Yet a cursory glance at Blahous’ study would not show this immediately. Blahous obscured his own findings by not displaying the 10-year totals for Medicare for All cost savings in his tables. As Matt Bruenig, head of the People’s Policy Project think tank, pointed out in Jacobin, adding up all the values for Medicare for All cost savings from 2022–31 in Table 2 of Blahous’ study shows that enacting Medicare for All would actually save $2.1 trillion in national health expenditures over that period. It’s as if Blahous saw the results of his data and didn’t like them, so he just decided to not publicize them in his table.

While the AP did acknowledge the cost savings (with caveats on whether doctors and hospitals would accept rates commensurate to that of Medicare on a larger scale), most of the articles did not address Medicare for All cost-saving explicitly. The article by Axios buries this same lede in the bottom of its “worth noting” section:

All told, “Medicare for All” would actually slightly reduce the total amount we pay for healthcare. But the plan would increase the share of that cost paid through taxes, rather than through insurance premiums or out of pocket

Blahous’ omission makes sense, given the small-government, market-centered political ideology of the Mercatus Center, which is funded primarily by conservative billionaires Charles and David Koch, who have given at least $9 million to the think tank and tens of millions to George Mason University. The organization was originally founded in 1980 by Richard Fink, a former executive vice president of Koch Industries, and both he and Charles Koch currently sit on its board of directors. Blahous, also a member of the Walton and Scaife family-funded Hoover Institution at Stanford University, has long warned about the supposed fiscal strain of Social Security and other “entitlement” programs, though at other times he’s seemed to contradict his dire appraisal. 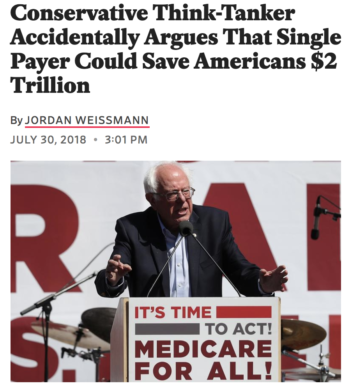 Sanders’ Medicare for All plan would replace the current system of private health insurers, which has seen health care costs continuing to rise faster than inflation even after the passage of the Affordable Care Act in 2010. (Drug prices in particular have risen by 12 percent annually over the past five years.) According to the federal Center for Medicaid and Medicare Services (CMS), total health care expenditures were almost $3.5 trillion in 2017, or about 18 percent of U.S. GDP. These figures are by far the highest in the world, in both dollar terms and percentage of GDP. And it’s getting worse: The CMS estimates that costs will increase an average of 5.5 percent each year, and that by 2026, total national health expenditure will amount to $5.7 trillion annually, almost 20 percent of U.S. GDP.

Yet for all its spending on health care, the U.S. lags behind the rest of the developed world in life expectancy, which fell over the past two years for the first time since 1963. Forty million Americans are still uninsured, which has been shown to increase mortality rates. According to a 2015 Kaiser Family Foundation/New York Times survey, 26 percent of Americans ages 18–64 reported having trouble paying their medical bills, 2 percent of which declared bankruptcy.

Sanders’ Medicare for All plan aims to remedy cost issues through massive administrative cost reductions by cutting out health insurance middlemen and savings from applying Medicare cost rates, which are significantly lower than private insurance rates due to the strength of government bargaining power on costs for care. Of course, it also plans to provide guaranteed coverage to every American.

But if Sanders’ plan actually amounts to net savings on overall health care spending, why do the Mercatus Center and all of the publications that cite it make such a fuss over the seemingly giant and scary multi-trillion-dollar price tag of Medicare for All even when it’s fiscally sound? The answer is of course, the big conservative boogeyman: taxes.

Since Medicare for All essentially shifts payment for health care from premiums, deductibles and co-pays to taxes, anti-tax crusaders like the Kochs and their minions at the Mercatus Center would naturally be opposed. In the AP article, Emory professor and former Clinton administration adviser Kenneth Thorpe notes pointedly, “There are going to be a lot of people who’ll pay more in taxes than they save on premiums.” Those people will certainly be at the top end of the income scale.

The media chorus complaining about how much a program like Medicare for All adds to the federal debt fades to a whimper, however, when it comes to enacting trillion-dollar tax cuts for the rich, providing billions in corporate welfare, or fighting endless and fruitless overseas wars with America’s $700 billion-a-year military budget.

Some publications, largely but not entirely progressive ones, like Jacobin (7/30/18), Vox (7/30/18), Common Dreams (7/30/18), Business Insider (7/30/18), the New Republic (7/30/18), the Week (7/30/18), Slate (7/30/18) and Vice (7/30/18), did not naively parrot the Mercatus study’s big price tag. These outlets pointed out the large cost savings of Medicare for All implicit in the study, and the benefits of universal health care coverage from both an ethical and a cost perspective. But the fact that a single study by a think tank with an anti-tax agenda can so easily frame news coverage on health care shows just how powerful the myth of fiscal responsibility can be.