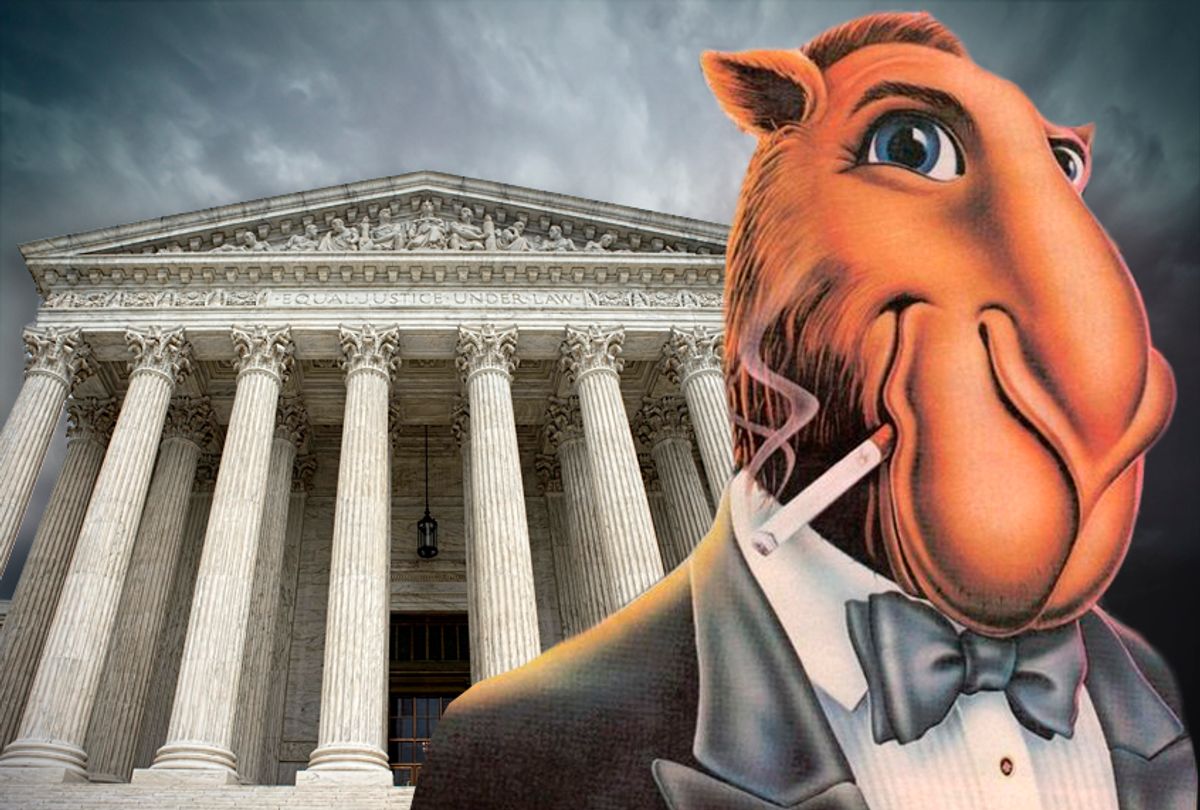 On the last day of its term in June, the Supreme Court handed down two decisions on free speech grounds damaging to unions and abortion rights. In one decision, they overturned California’s law requiring so-called “crisis pregnancy centers” to provide clients with information about abortion.

In the second decision, they ruled that government workers who choose not to join unions may not be required to pay dues to the union because that would require them to subsidize speech by the union with which they might disagree.

In her dissent, Justice Elena Kagan accused the court’s conservative 5-4 majority of “weaponizing the first amendment” in coming to its conclusions. The New York Times reported that “The two decisions were the latest in a stunning run of victories for a conservative agenda that has increasingly been built on the foundation of free speech. Conservative groups, borrowing and building on arguments developed by liberals, have used the First Amendment to justify unlimited campaign spending, discrimination against gay couples and attacks on the regulation of tobacco, pharmaceuticals and guns.”

But perhaps the most damaging Supreme Court decision handed down on First Amendment grounds was Citizens United v Federal Election Commission, which found in 2010 a right to unlimited spending by corporations and unions and other organizations on campaign advertising. Citizens United is a conservative non-profit political action organization headed up by David Bossie, who took a leave from the group in 2016 to serve as deputy campaign manager on the Trump campaign. They were attempting to screen “Hillary: The Movie,” shortly before the Democratic primary for president. The movie was a typical right-wing diatribe filled with disinformation, exaggerations and lies. Citizens United v FEC found as unconstitutional the campaign law banning the broadcast of “electioneering communication” 30 days before a primary, or 60 days before a general election.

Essentially, the Supreme Court found that money is speech, and corporations have free speech rights too. As Mitt Romney famously said at the Iowa State Fair in 2011 when he was running for president, “Corporations are people, my friend.” It was perhaps the purest expression of a theory long held by conservatives and business interests. What people don’t realize is that it grew out of cigarettes and the tobacco industry’s frustrations in marketing their poison.

Meanwhile, they continued their campaign of lies to the American public about the dangers of smoking. They maintained that nicotine was not addictive and that smoking didn’t cause cancer or heart disease. They established front groups that provided “scientific” evidence to support their claims even in the face of mounting evidence that smoking cigarettes was absolutely a danger to your health.

But distributing their lies about smoking by public relations alone wasn’t good enough for them. They began to seek some way to find a right to advertise their products.

In 1992, the R.J. Reynolds Tobacco Company held a conference on the First Amendment at the Harriman Conference Center. They invited corporate executives and conservative legal eagles like 9th Circuit Court of Appeals Judge Alex Kozinski (who retired from the bench last year after numerous claims accusing him of sexual harassment). They wanted some “liberals” at the conference, so they also invited First Amendment scholar Floyd Abrams, who at that time represented The New York Times, and Hugo Black, an entertainment lawyer in Los Angeles who was the grandson of Supreme Court Justice Hugo Black. I was a client of young Hugo’s, and they were looking for another “liberal” at the conference, so they invited me. I was at the time working as a screenwriter in Hollywood.

The conference was an R.J. Reynolds production, so they flew us to New York on MGM Grand Air, which at the time was an ultra-luxury mini-airline that flew a couple of 727s that had been outfitted inside like private jets with leather sofas, huge swivel chairs, dining room tables and a bar. They picked us up at JFK and flew us up to the Arden House center on an R.J. Reynolds helicopter.

The Harriman estate was a huge old stone mansion located on top of a hill on the border of Harriman State Park, a lush 10,000 acre spread near Harriman, New York, about 50 miles from New York City. We were put up in huge rooms at the estate and wined and dined at an introductory dinner in the estate’s massive ballroom.

The next day, the conference on the First Amendment was held in an out-building on the estate. About 20 of us were seated at tables in a square. White-jacketed waiters served coffee and pastries. Outside, through leaded glass windows, could be seen grassy, rolling lawns and thick forests.

The agenda quickly became clear. R.J. Reynolds and its conservative allies were looking for a way to put advertising on the same level as journalism or entertainment when it came to free speech. There was a lot of whining from the conservatives on the panel about the liberal media. Liberals controlled the networks and the newspapers, they said. Conservatives found it difficult to find a place to have a voice. Why didn’t Hollywood produce any “conservative” TV shows or movies, we were asked.

I replied by asking what a “conservative” show would look like. Well, something that expressed “family values,” they answered. I was writing a pilot for one of the TV networks at the time, so I said, let’s pretend you’re a network executive, and I’m a writer, and I’m coming in to pitch a “conservative, family values” show. Off the top of my head, I sketched a show about a happy American family living in a comfortable suburb. Dad has a good job. Mom stays home and cooks and cleans and drives the kids to football and ballet practice. At night everyone sits down for supper and talks about all the neat stuff they did that day. Dad got a promotion! Mom found a sale and bought new sheets and towels! Son Johnny is starting as a linebacker in the football game on Friday! Daughter Sally is practicing for the Nutcracker and has a date for the movies with her boyfriend, Tim, president of the school’s honor society! The big tragedies of the day are that the dog has fleas, and the car needs new tires.

Anybody want to see that show?

The whining about the liberal media continued. I finally got fed up and taunted them with what I thought was a ridiculous challenge. You guys all represent big corporations with tons and tons of money. If you’re so unhappy with what the networks are doing, why don’t you go out and buy one and put on the conservative stuff you say is missing? You’re so tired of the liberal judges, why don’t you go out and elect some candidates who will appoint the kind of judges you want, like Alex Kozinski over there? He’ll elevate commercial speech to the same plane as other speech under the First Amendment for you, won’t you Alex?

He just sat there and smiled.

What’s that old saying? Be careful what you wish for? Well, I wasn’t wishing for those things, but it took them a couple of decades, and here we are. They went out and bought a network, Fox, and they’ve used the First Amendment to put out the kinds of lies they believed were missing from the news presented by the liberal media. They elected conservatives and nibbled away at the courts, right up to and including the Supreme Court, until they got the kinds of decisions they were looking for.

READ MORE: the id of Trump the economics of place and our empty national soul

In 1994, two years after that conference on the First Amendment at the Harriman Estate, the seven top executives of the largest tobacco companies went before the House Energy and Commerce Committee on Health and the Environment and raised their right hands and swore that nicotine was not addictive and that smoking did not cause cancer. If they were willing to lie to the United States Congress about the dangers of smoking, what do you figure they would have done if they had been allowed to advertise cigarettes anywhere, anytime, on any platform they chose, to the American people?

With Citizens United, they got a decision that gave corporations the right to spend unlimited amounts of money on whatever lies they want to sell to the public under the guise of protected “political” speech. Global warming is a “hoax”? Go on! Spend a few million selling it to the suckers. Roy Moore is a god-fearing family man who will get in the Senate and protect your teenage daughters from marauding pedophiles? Sure! Dip into the old corporate coffers and sell them that bill of goods.

They want nothing less than an unfettered right to lie and the right to spend as much as they want doing it. Back in 1992 at the Harriman Estate, they merely complained that the media was too liberal. Now they’ve got a president who says the media is “the enemy of the people” spreading “fake news.”

It turns out the Virginia Slims ad was right. We’ve come a long way, baby.