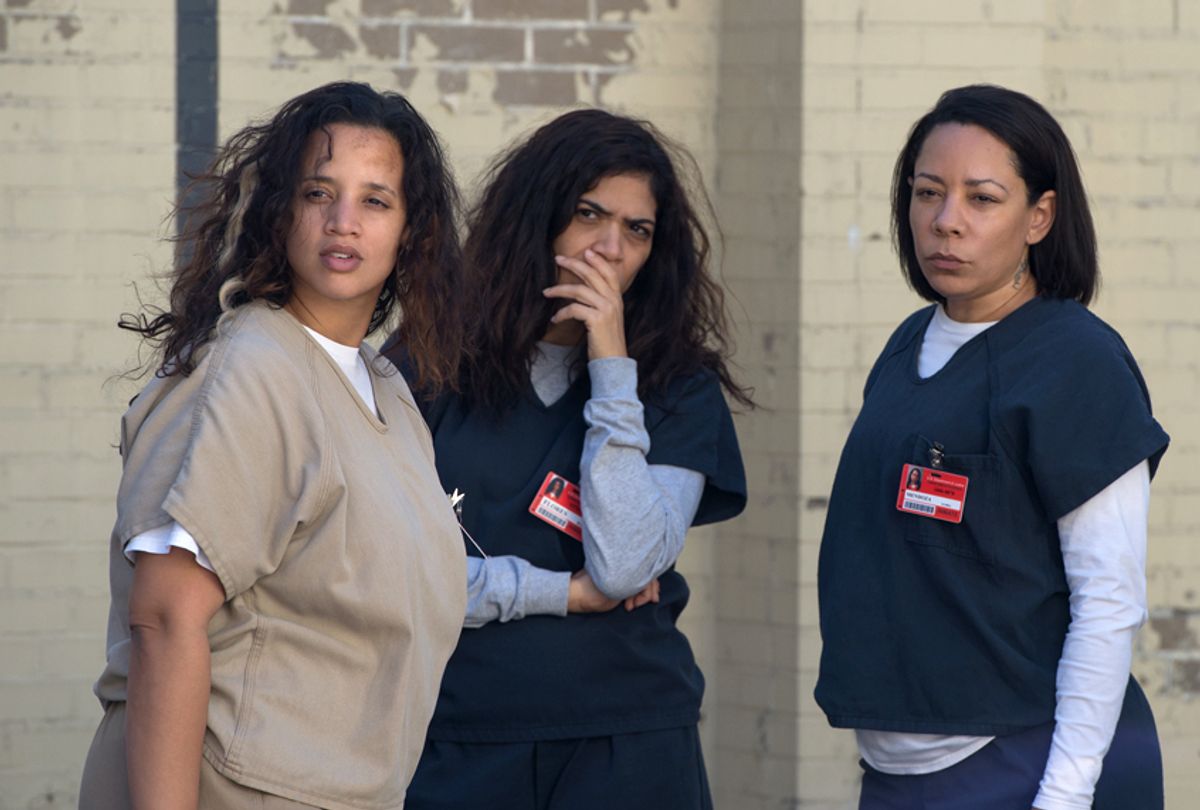 This story contains spoilers for the sixth season of "Orange Is the New Black." Don't read if you don't want to know what happens.

Often we fail to appreciate key characters in certain shows until they’ve disappeared.

Season 6 of “Orange Is the New Black” forces us to remember that in its opening episode and in the finale, but for different reasons. When Netflix’s drama returned with its new season set in Litchfield’s maximum security facility down the hill from its original “camp” location, several characters were missing from the crowd. Vanished are Brook Soso (Kimiko Glenn), Yoga Jones (Constance Shulman) and the peppy glamour queen Maritza Ramos (Danielle Guerrero). Another, Big Boo (Lea DeLaria) made a brief appearance before she and others went AWOL from the plot for the rest of the season.

Series creator Jenji Kohan hinted that the dramedy would be paring down its sprawling cast in the transition between the fifth and sixth seasons and it has, adding new characters in the process of doing so.

But the deeper narrative of these new episodes primarily hinges on three characters: Piper Chapman (Taylor Schilling), the white girl “trojan horse” meant to draw viewers into caring about Litchfield Prison in the first place; Taystee (Danielle Brooks), blamed for orchestrating the prison riot that leads to the deaths of two guards; and Blanca Flores (Laura Gómez), whose act of peaceful civil disobedience kicks off the uprising.

Out of that trio, Blanca has consistently been the most low-key of all the women in Litchfield’s camp. Blanca merits one profiling flashback in the fourth season episode “Turn, Table, Turn,” revealing her past as a elder care provider for a woman intent on dehumanizing her. There, she meets her lover Diablo (Miguel Izaguirre), hired as the woman’s gardener.

But when her employer fires Diablo because he’s drawing too much of Blanca’s attention, Blanca strikes back by having wild sex with Diablo in her employer’s bedroom, taking advantage of the old woman's racist fears and lack of mobility.

Frequently camouflaging her intelligence by communicating in Spanish to those she trusts, Blanca stands out within Litchfield’s ecosystem even though she rarely is central to a main plot arcs. The Dominican inmate’s distinguishing physical characteristic is an unruly unibrow that augments her feral appearance. She's not the character profile you want to match up with in one of those “which ‘Orange Is the New Black” character are you” quizzes.  However, Blanca's stand-out moments, a key one depicting her withstanding torture for three days, tell us beneath the frizzy unwashed mane and scowl is a defiant woman who refuses to be broken.

And this is why the gut-punch served up in the closing scenes of the season is shocking and makes complete sense.

READ MORE: A bird trapped in ICE detention: What it's like inside the largest immigrant prison in the US

Blanca is part of a group of convicts slated for early release from “max,” along with Piper and Sophia Burset (Laverne Cox). But as they’re being led off to be processed out, the line is divided in two. In one line are the black and white women. In the other are other brown ones, including Flores. Piper notices this but doesn't say anything.

As both lines emerge from the prison, the blacks and whites run out to a gathered crowd of family waiting to meet them, including Piper’s brother and, sadly, Diablo. But the Latinx women are met by ICE officers and another transport, this one to a detention center. Cuffs are placed on Blanca's wrists, and she starts to weep. Diablo is left standing at the wire fence that stands between Litchfield and freedom forlornly holding a bouquet of flowers.

Interspersed within this sequence are scenes from a ritzy gathering hosted by PolyCon Corrections, the parent company of Litchfield’s owners MCC. There, newly minted senior vice president Linda Ferguson (Beth Dover) unveils the company’s expansion into the new and growing market of Immigration and Customs Detention centers. Presumably Blanca is among the first batch of prisoners to go in.

“Orange Is the New Black” exists as a years-long interrogation of white privilege, something it’s done from its very first episode and brought to life via Piper. Through her, the series asks its viewers to comprehend such privilege and their relationship to it.

But in this three-minutes-to-midnight twist, the consequences of this hierarchy are made clear. We know what’s ahead for Piper because we know how life outside went for series consulting producer Piper Kerman; “Orange Is the New Black” is based on her memoir. At the very least, Schilling’s Piper re-enters her comfortable middle class existence, but that will probably include some measure of success and fame.

Taystee, meanwhile, goes down for a murder she did not commit. She’ll be in max for life, pending an appeal that's likely to be fruitless. Blanca, though, may simply disappear from Litchfield life; although the series is set to return for a seventh season, there’s no way of knowing how much time will be spent in PolyCon’s detention center.

Kohan and the drama's other producers specifically wanted to tackle the inhumanity and injustice visited on undocumented immigrants and workers. The series dove into the corruption within the for-profit prison pipeline in the fourth and fifth seasons. And in interviews, Kohan revealed her intent to blow apart the series timeline in season 6, thereby explaining how a series that began in 2013 and, chronologically speaking, has maintained a pacing consistent with Piper’s 15-month-sentence is suddenly incorporating plot devices tied to real world events.

Television series play with timelines all the time, so there’s no reason to take issue with that decision. Had Kohan held true to the established timeline, it would ask a series that examines socioeconomic, cultural and racial rifts to ignore all the corruption at work in our nation’s privatized prisons and the heinous criminalizing of immigrants and asylum seekers.

“Orange Is the New Black” may no longer be in a unique position to speak to the ills of the prison industrial complex; we’ve seen glimpses of the part it plays in our politics in HBO’s “The Night Of” and to a lesser degree of the current season of USA’s “The Sinner.” What "Orange" does well, an in a way no other series is able to do as effectively, is to reflect the state of culture and society within the walls of the prison.

The inmate society at camp is softer than the one seen in “max,” but in each case the greater message is similar: although factions align against each other, their beefs are usually pointless and ultimately surmountable when the women realize that the real adversary is the system itself. In this series, the system happens to be the prison.

And if you’ve been watching the series closely, the outcome of this sixth season was determined in the penultimate episode of the series' fourth in an action that stands in for the problems America itself is contending with.

This is the hour where the women band together to protest the inhumane treatment at Litchfield’s “camp” by an abusive new crew of guards sent in by MCC. The game-changing riot begins as a peaceful protest with prisoners standing on tables and demanding the resignation of an especially ruthless guard, Desi Piscatella (Brad William Henke).

And the first three women who take a stand are, in order, Blanca, Piper and Taystee.

The larger share of this new season is devoted to juxtaposing Piper’s relatively smooth ride to the outside with Taystee’s turbulent and doomed trip through a legal structure more concerned with expediency than justice. Piper is protected by her whiteness; Taystee, through some effort, activates the sympathy and effort of Litchfield’s former warden Joe Caputo.

Within that, we may not have taken into account what lay in store for Blanca, whose fate was only hinted at in passing near the close of “Sh*tstorm Coming,” a title that doubles as foreshadowing.

There’s are a number of ways to look at the writers’ choice to send Blanca into this limbo. We may notice her disappearance in season 7, but she’s tertiary enough that she may not impact Taystee’s and Piper’s parallel central plots. Then again, the very fact the we aren’t asked to suddenly pay more attention to Blanca in these new episodes makes her transfer to immigration detention more poignant.

Putting aside her conviction, her situation reflects the station of people who came to the country illegally seeking a better life. In her flashback, she shares her regret with Diablo that she didn’t do more exciting things when she was younger. “Travel, for example,” she says. “I’ve never even been to New York City.” But her economic circumstances make that impossible. “I live with an old lady. I have to send money back home,” she says.

Then she makes a mistake that lands her in prison and, soon, in some state of exile preceding deportation. We only know what that means in the abstract, via stories of children in pens and huddling under metallic emergency blankets.

The children and parents featured in these stories are people whose only offense is to sneak over the border without the proper paperwork, seeking safety and a better life. They are innocent. Blanca’s conviction means that according to the law, she is not.

But the lifeblood of “Orange Is the New Black” is the stories of these women, views into different lives and circumstances proving how similar they are to the people who are watching them, who are enjoying their freedom. This means its storytellers now have an opportunity to fill in the emotional blanks of the immigration detention story, and if it chooses to seize that option, it’s tough to think of a better character to star in that narrative than the convict to whom few of us paid very much attention. She has it now. What happens next?

The rapper and activist has a message for Trump on immigration.