Jay Sekulow tells George Stephanopoulos, "I had bad information at the time and made a mistake in my statement." 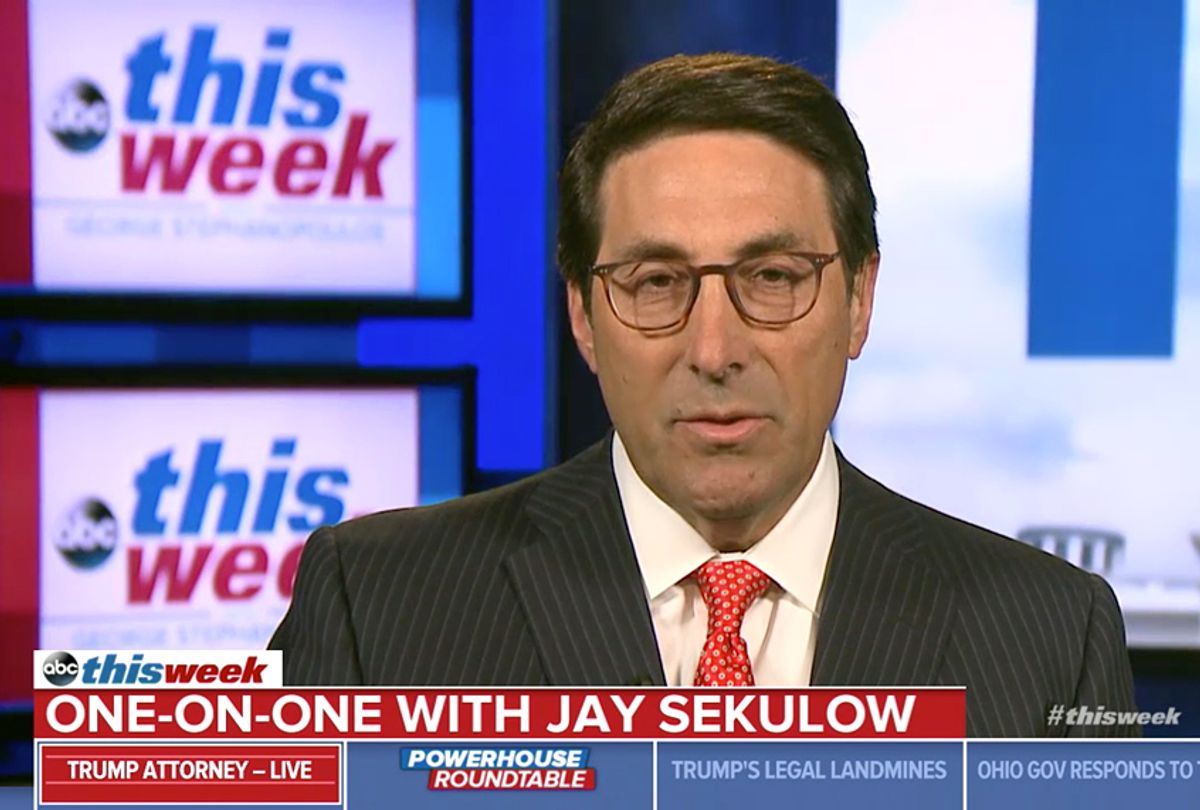 "I had bad information at that time and made a mistake in my statement," Sekulow said on Sunday to George Stephanopoulos on ABC's "This Week." "I've talked about that before. That happens when you have cases like this."

The now infamous Trump Tower meeting is an singularly important focus of the Mueller investigation into Russian interference with the 2016 presidential election. Last year, the New York Times revealed Donald Trump Jr. and other top Trump campaign personnel met with an affiliate of the Russian goverenment, the lawyer Natalia Veselnitskaya. Trump Jr. denied any malicious intent, claiming, initially, that the meeting was for “a program about the adoption of Russian children.” The president corroborated this claim and signed off on the statement.
READ MORE: Democratic moderates fear the "socialist left" will wreck the party: They want to keep that gig
But after more digging, the Times discovered the purpose of the meeting with Veselnitskaya was to gather information to impugn the character of Trump's then-Democratic rival Hillary Clinton. After which Trump’s son admitted that he did take the meeting to find damaging information on Clinton and the Democratic party. Then, in January, Trump’s legal team sent a letter to special counsel Robert Mueller acknowledging that President Trump “dictated” the initial false statement. The letter was signed by Sekulow and former Trump attorney John Dowd.

Donald Trump Jr's response to Veselnitskaya's invitation read, “if it’s what you say I love it.” Before the Senate Judiciary Committee in June, Donald Trump Jr. explained that he intended only to say thank you to the Russian lawyer, “it was a colloquial term to say hey, great, thank you.”

In the summer of 2017, Sekulow denied involvement with the initial statement saying, “I wasn’t involved in the statement drafting at all, nor was the president. I’m assuming that was between Mr. Donald Trump Jr., between Don Jr. and his lawyer.”

When pressed by Stephanopoulos, however, Sekulow backtracked, declaring that at the time of the statement he had been working on the case for only a few months and had limited information as a result, “Over time you have facts develop, as investigations do.”

On Sunday morning Trump offered the clearest public acknowledgement that his son met with the Russian attorney stating it was “totally legal and done all the time in politics,” The Washington Post reports.

“Fake News reporting, a complete fabrication, that I am concerned about the meeting my wonderful son, Donald, had in Trump Tower,” the president wrote in an early morning tweet. “This was a meeting to get information on an opponent, totally legal and done all the time in politics — and it went nowhere.”

Fake News reporting, a complete fabrication, that I am concerned about the meeting my wonderful son, Donald, had in Trump Tower. This was a meeting to get information on an opponent, totally legal and done all the time in politics - and it went nowhere. I did not know about it!

Trump’s attorney Rudy Giuliani said in June that the legal team's previous denial about Trump's involvement in the statement was a mistake.