To solve the puzzles within Quentin Tarantino's film noir, it helps to plot out the story in chronological order 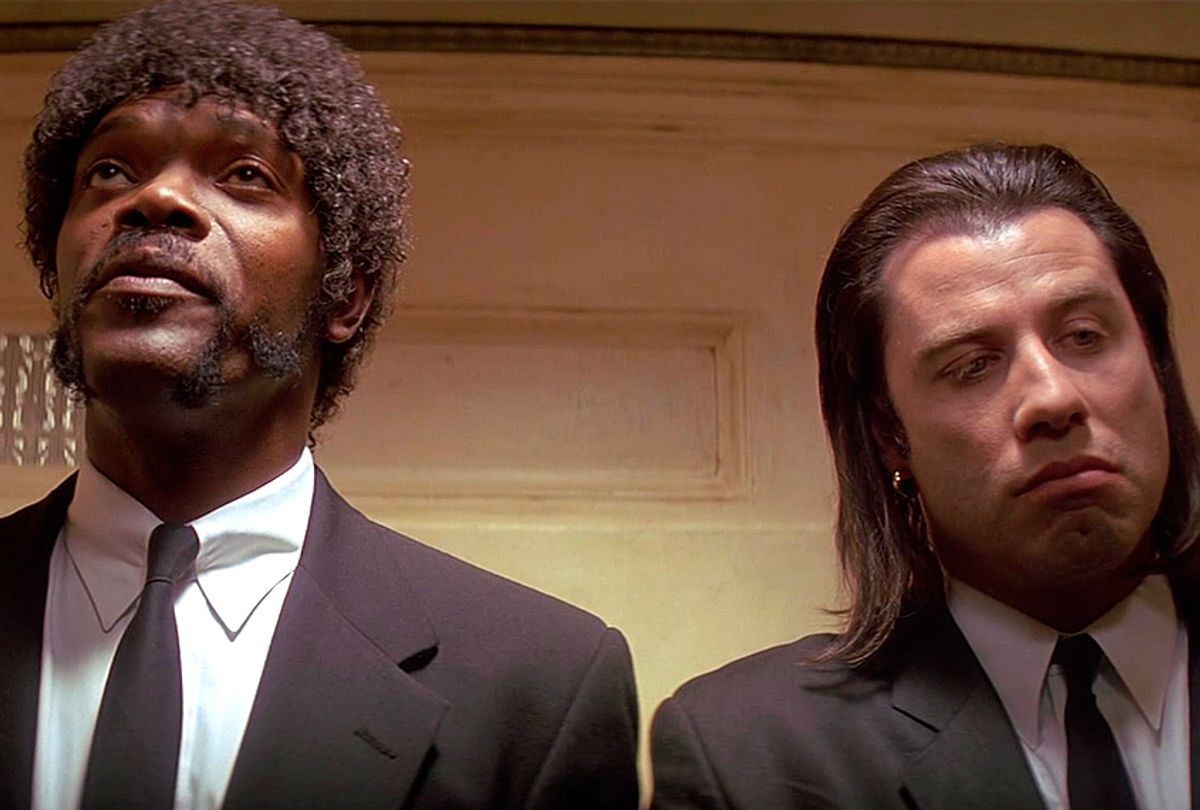 Excerpted from "Pulp Fiction" © Dana Polan (2000). Reprinted with kind permission of the author, the British Film Institute and Bloomsbury Publishing.

Tarantino (in an interview with French writer Jean-Pierre Deloux) likens "Pulp Fiction’s" fragmentary and interrupted nature to the specific structure of the literature of pulp fiction and the casual forms of consumption it encourages:

[a pulp fiction novel] is a novel you could buy for a dime, that you read in the bus while going to work. At work, you would put it in your back pocket, you’d sit on it all day long, and you’d continue reading it on the bus on the way home, and when you finished it you gave it to a friend or you’d throw it in the garbage. 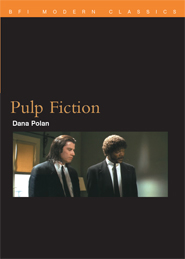 Likewise, Pat Dowell in Cineaste offers an intriguing argument that the structure of "Pulp Fiction" derives from TV sitcoms (revealingly, beyond the reference to Fonzie in "Happy Days," the script included a scene where Mia makes Vincent choose between "The Brady Bunch" and "The Partridge Family" and between "Bewitched" and "I Dream of Jeannie"). In Dowell’s words:

The structure of "Pulp Fiction" is not so new as it looks. It should be familiar to any television watcher, for it is our psychological accommodations to TV’s dramatic shape that Tarantino exploits for his narrative surprises. Every day Americans are quite at home with stories that come to a rest, divided into segments to be interrupted by other stories, and then resume. The interruptions are called commercials and increasingly they are commercials for other stories, both on television and in the movies. Channel surfing also segments the stories we watch. In "Pulp Fiction" Tarantino starts episodes and lets them come to what feel like commercial breaks. The setup scene of Honey Bunny and Pumpkin in the coffee shop planning their robbery is exactly like the tease that opens most television shows before the first commercial; audiences don’t expect it in a movie and so don’t frame it as such, but, after surfing in and out of other episodes, Tarantino eventually returns to it.

Certainly, it could be argued that a number of the plots in "Pulp Fiction" are like versions of TV sitcom that have mutated into film noir. For example, the whole of the segment entitled ‘The Bonnie Situation’ – in which the hitmen are reduced to virtual adolescence (even in their manner of dress) as they try to clean up a mess (in this case, a body and a bloodied car) before Bonnie comes home – has the structure of those sorts of sitcoms in which kids get into some mess while the parents are away and then spend the whole segment or episode trying to make things right before time runs out and the figures of authority return. This, too, is the structure of the sequence in which Vincent has to save Mia from overdosing and make sure the authority figure Marsellus doesn’t find out. Interestingly, Vincent can only save Mia by taking her to Lance’s suburban home – here, a veritable bastion of mass culture with the TV always on, the inhabitants decked out in popular-culture T-shirts, the detritus of consumer society spread out all over (including, for those who obsessively look for details – get ready to hit freeze on the remote control! – board games of Life and Operation in the living room where Vincent engages in the medical procedure to save Mia). When he crashes into the house with his car and carries Mia in, it is as if Vincent is bringing the harsher, violent world of "Pulp Fiction" into the seemingly safer haven of the domestic sitcom. As critic Sarah Kerr puts it in her review of the film:

The drug-dealer and his wife are a low-life amoral echo of Ralph and Alice Kramden [from the working-class sitcom, "The Honeymooners"] and all the bickering TV couples who followed them. The fact that the subject of tonight’s argument is a near-dead woman’s blood-and-drool covered body and that resolving tonight’s dilemma requires stabbing her heart with a syringe only ups the ante.

But if the spotting of the allusions is an effortless activity that you either get or don’t, which therefore doesn’t really involve work on the part of the spectator, another level of fetishistic obsession – and another level of the film’s appeal – has to do with the more active labour of figuring out "Pulp Fiction’s" various puzzles. Certainly, some of the interactivity of the film works only for the trivialist (for most of us, it would never occur to wonder why Vincent is alone in the bathroom with his machine gun on the counter), who can thereby flaunt his or her (but usually his, given the ideal audience for this nerdy obsessiveness) special knowledge (to take another example drawn from the web, freeze-framing shows that there are already bullet holes in the wall before the young man empties his revolver at Jules and Vincent). The very structure of "Pulp Fiction" is a puzzle, its unveiling of the plot achronologically asking spectators to figure out just what happened, and when, chronologically. One could debate just how avant-gardist this playing with temporality is – interestingly, Tarantino himself in interviews argues that the film is easily accessible even with its achronology, and it is true that the film was able to cross over from independent film cult classic to mainstream hit – but there is no doubt that it encourages an active spectator who is given the job of putting the pieces of a puzzle together.

<style="color:#ee2c1d">READ MORE: From Bluto Blutarsky to Donald Trump: The United States of "Animal House" at 40

Here, sorted out, is the chronology of the film: early one morning, Jules and Vincent are sent to retrieve a briefcase for their crime boss Marsellus and do a hit on some young kids (probably college guys) who have failed to return the mysterious briefcase to Marsellus. One of the kids had been in the bathroom and he charges out unloading his gun, but all the bullets miss Jules and Vincent and he is shot dead. Afterwards, as they are driving away, Marvin, the mole who set up the kids, is killed in the back seat when Vincent’s gun goes off accidentally. They call Marsellus for help and he dispatches Winston Wolf to meet them at Jimmie’s house. After Mr Wolf helps them clean up the mess and drop off the cadaver and car, Vincent and Jules go off to a diner for breakfast. Here, they discuss whether or not the bullets missing them was a miracle. Honey Bunny and Pumpkin try to hold up the diner and have a stand-off with Vincent and Jules, who lets them go. Vincent and Jules go to a club, where Jules gives the briefcase to Marsellus, who has just been telling Butch the boxer to take a dive in his next boxing match. Vincent and Butch have a little run-in.

The next narrative development is not shown but implied: Jules leaves the life of crime and no longer figures in the story (the implication is that in the nightclub he tells Marsellus he is quitting and then does so). In the evening, Vincent goes to dealer Lance’s house for a heroin score and then shows up at Marsellus’s place to take Mia out. Vincent and Mia go out to Jack Rabbit Slim’s. When they return from the restaurant, Mia nearly overdoses on heroin. Vincent rushes her to Lance, who is able to save her. Mia and Vincent say goodbye outside her house.

On the night of the fight (which night isn’t clear), Butch disobeys Marsellus, kills his opponent in the ring, and flees in a cab. Marsellus summons Vincent and assigns him to track down Butch. Meanwhile, the cab takes Butch to the motel where he and his girlfriend Fabienne are hiding out. The next morning Butch realises that Fabienne has left his father’s watch back at his old apartment. He goes to get it and encounters Vincent, whom he kills. Driving away, he has a run-in with Marsellus and after a chase both end up in a redneck pawnshop. They are abused by the rednecks and Marsellus is raped. Butch manages to untie himself, but instead of fleeing he rescues Marsellus, who promises torture for the surviving redneck. With accounts settled between him and Marsellus, Butch returns to Fabienne and they ride off on one of the rednecks’ chopper.