The music icon was photographed by 23-year-old Tyler Mitchell, who told "Vogue" Beyoncé "was really an open book" 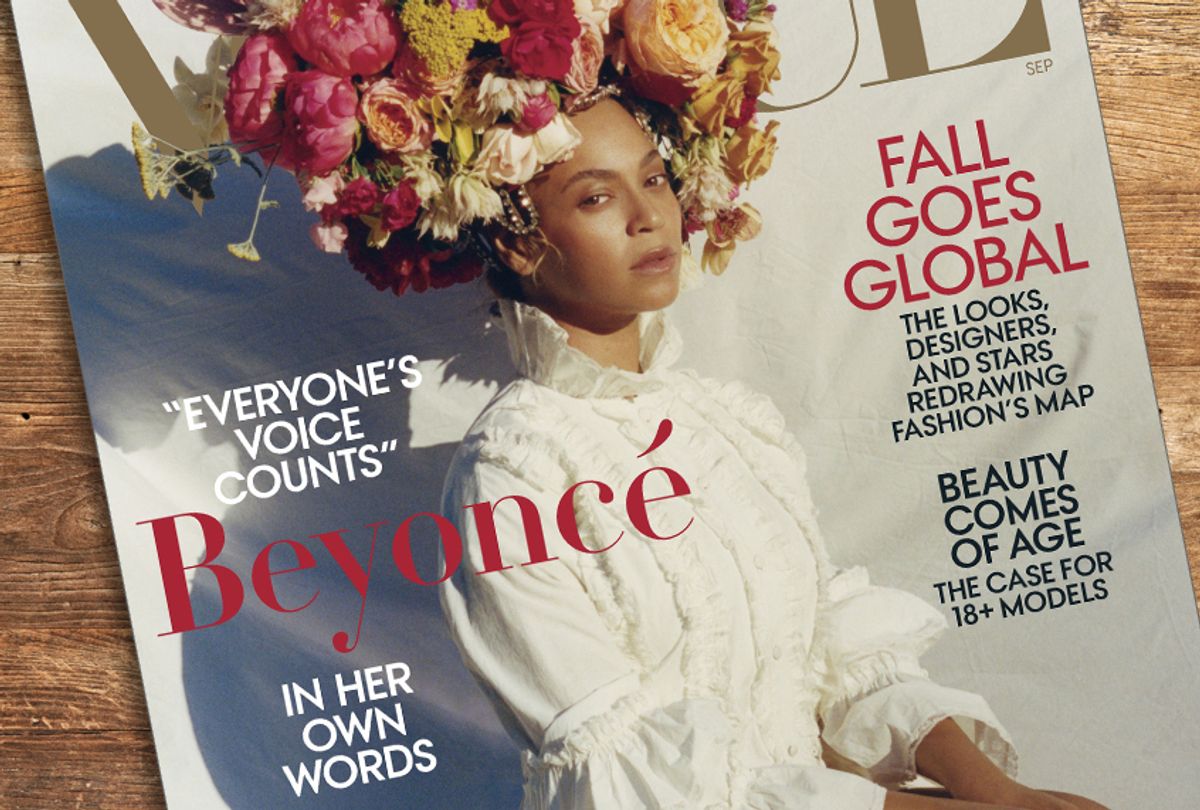 Beyonce on the cover of "Vogue" (Vogue/Getty/Salon)
--

Last week, it was reported that Beyoncé would take over the cover of Vogue magazine in both picture and vision for the magazine's iconic September issue. Significantly, the music icon tapped Tyler Mitchell to photograph her — marking the first time in the magazine's history that a black photographer was selected to shoot the cover. At just 23 years old, Mitchell is also among the youngest to ever take on the coveted job.

On Monday, those images finally hit the internet. And, they are breathtaking. Mitchell captures Beyoncé in all of her beauty and power — with little make up, but lots of artistry — including stunning floral arrangements that service as an organic crown for the entertainer in several of the photos. In another image, Beyoncé is barefoot, her legs wide open and her tutu sprawled along the stairs she sits upon. Each image is arresting in its own right, bending reality and playing with airy light and shadow, all while incorporating a nuance and depth that is often absent in traditional glamour shots.

And, as if the gorgeous photos were not enough, Beyoncé also gives the world a rare glimpse into parts of her interior, writing long captions under the topics of "Pregnancy & Body Acceptance"; "Opening Doors"; "Ancestry"; "My Journey"; "Freedom"; "Coachella," the California music festival that she headlined this past year, becoming the first woman of color to do so; "OTR II," the joint tour with her husband Jay-Z; and "Legacy."

"Until there is a mosaic of perspectives coming from different ethnicities behind the lens, we will continue to have a narrow approach and view of what the world actually looks like," Beyoncé writes. "That is why I wanted to work with this brilliant 23-year-old photographer Tyler Mitchell."

"When I first started, 21 years ago, I was told that it was hard for me to get onto covers of magazines because black people did not sell," she continued. "Clearly that has been proven a myth. Not only is an African American on the cover of the most important month for Vogue, this is the first ever Vogue cover shot by an African American photographer."

READ MORE: Writing truthfully about my father: An act of resistance, an act of love

After listing powerful black women entertainers who smashed barriers like Josephine Baker, Nina Simone, Eartha Kitt, Aretha Franklin, Tina Turner, Diana Ross and Whitney Houston, Beyoncé affirmed how important it is to her to "open doors for the next generation of talents."

"If people in powerful positions continue to hire and cast only people who look like them, sound like them, come from the same neighborhoods they grew up in, they will never have a greater understanding of experiences different from their own. They will hire the same models, curate the same art, cast the same actors over and over again, and we will all lose," she added. "The beauty of social media is it’s completely democratic. Everyone has a say. Everyone’s voice counts, and everyone has a chance to paint the world from their own perspective."

Beyoncé also wrote openly about the pressure for women, especially in entertainment, to return to their pre-baby body almost instantly. But, after undergoing an emergency C-section with her twins, she "needed time to heal, to recover."

"During my recovery, I gave myself self-love and self-care, and I embraced being curvier. I accepted what my body wanted to be," she added. "I think it’s important for women and men to see and appreciate the beauty in their natural bodies. That’s why I stripped away the wigs and hair extensions and used little makeup for this shoot."

In one of the most moving moments, the icon explained how she wants to raise her children. She declared:

I want the same things for my son. I want him to know that he can be strong and brave but that he can also be sensitive and kind. I want my son to have a high emotional IQ where he is free to be caring, truthful, and honest. It’s everything a woman wants in a man, and yet we don’t teach it to our boys.

I hope to teach my son not to fall victim to what the internet says he should be or how he should love. I want to create better representations for him so he is allowed to reach his full potential as a man, and to teach him that the real magic he possesses in the world is the power to affirm his own existence.

Beyoncé is notoriously private, especially in recent years. She almost never grants interviews and is in total control of the narrative that she shares with the world — her prerogative, for sure. But, in these extended captions written for Vogue, there is a sense of freedom in her words and a willingness to reveal at least a piece of the depths of her being. Freedom, authenticity, generosity and a sense of uninhibitedness are demonstrated in Mitchell's images, too.

"When she sat down for me there was immediately the kind of comfort level you’d have with a friend, which was quite unexpected," he told Vogue. "You’d imagine someone as famous as Beyoncé to be protective of her image, but she was really an open book—and that’s exactly what you want as a photographer."

Beauty after 50 is about mindset

One of modeling’s first African–American supermodels to break barriers in the industry, is now setting a different standard for beauty for women of all ages.