Donald Trump throws his eldest son under the bus: And yes, this "collusion" could be criminal

Did Trump just set up Don Jr. to take the fall? That Trump Tower meeting could involve at least one felony 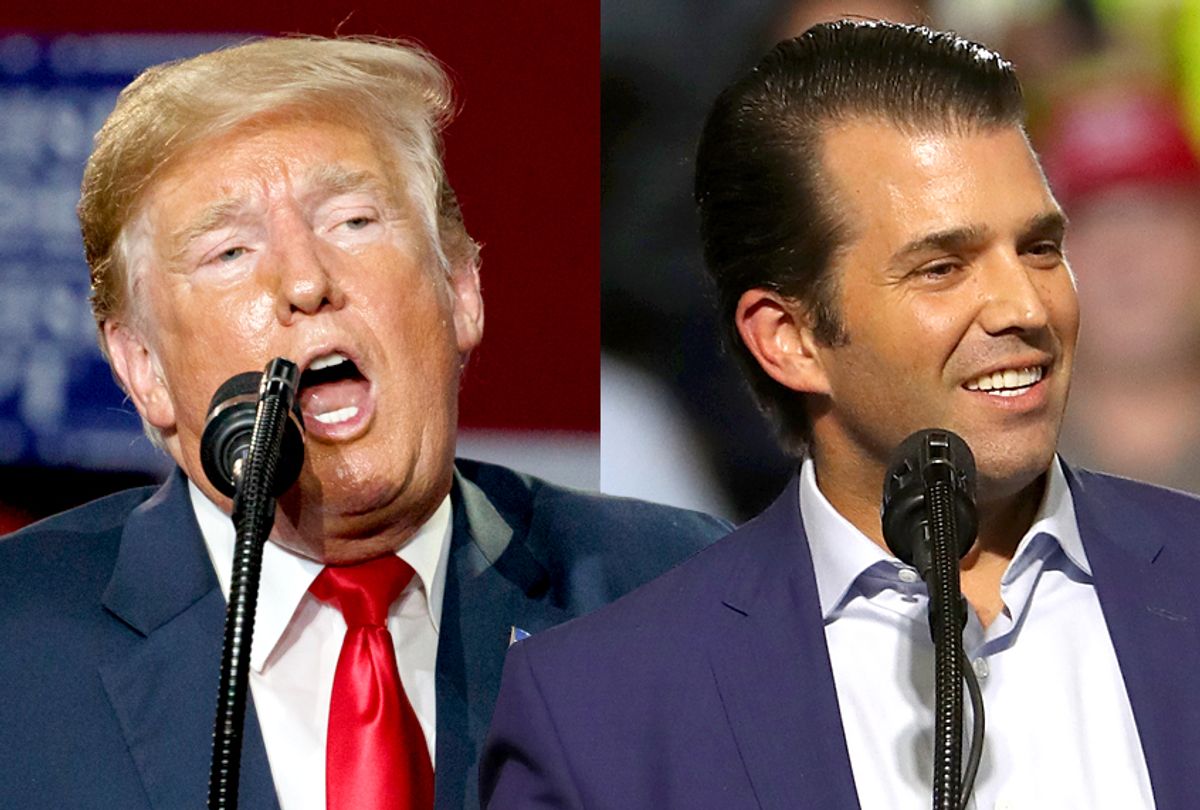 In the great Aaron Sorkin and Rob Reiner film "A Few Good Men," Jack Nicholson’s character, Col. Nathan R. Jessup famously snaps under questioning and blurts the truth in court about who ordered a violent and ultimately deadly assault against another Marine. Spoiler: it turns out Col. Jessup incriminates himself by confessing to the “code red” -- the legendary “you can’t handle the truth!” scene.

It’s difficult to know exactly why Donald Trump pulled a Jessup on Twitter this past weekend, but he did. We can assume it was fear and desperation mixed with a bit of hubris and a lot of rage, diced and boiled into an erratic cocktail of madness. And if he’s satisfied with his confession, he’s more insane than we all thought because he didn’t confess to his own crime. Instead, Trump committed a form of filicide, incriminating his first born son, Donald Trump Jr., as well as his son-in-law, Jared Kushner -- along with his former campaign chairman Paul Manafort, who’s already neck-deep in legal jeopardy.

It’s all right there. “This was a meeting to get information on an opponent.” We’ll circle back to whether that’s illegal presently.

You might recall that a little more than a year ago, when the news of the June 9, 2016, meeting at Trump Tower first broke, President Trump for some reason dictated a statement on his son’s behalf saying that the meeting was strictly about Russian adoptions. What Trump didn’t say at the time was that Russia was restricting adoptions to American couples due to the existence of the Magnitsky Act and the sanctions linked to it. The lifting of the sanctions (it seemed) would be Trump’s “fee,” paid to Russia in exchange for the dirt the Russians were offering to Don Jr., Kushner and Manafort.

In addition, the president’s misleading 2017 statement (written for his son) emerged after Don Jr. publicly posted his 2016 email exchange with publicist Rob Goldstone, in which it was clear the meeting had to do with receiving dirt on Clinton that had been gathered by Russian intelligence. The emails also confirmed that, according to Goldstone, Russia wanted Trump to win, a preference personally confirmed by Vladimir Putin in Helsinki last month.

But now the adoption lie has been contradicted by the president, and the contemporaneous suspicions about the meeting -- that the meeting was, in fact, a meeting about acquiring stolen information about Hillary Clinton -- have been entirely confirmed through Trump’s confession. All told, the president has undeniably hurled his son under a bus, adding further validity to the content of Don Jr.'s emails with Goldstone, while completely erasing Trump’s own “adoptions” excuse.

Then, as if playing Judas wasn’t bad enough, Trump made sure to deny his own knowledge of the meeting at the end of the tweet, hanging Junior out to dry. Charlie Pierce’s reference to the Fredo assassination scene from the end of "The Godfather Part II" was pretty damn close to the bullseye.

The next question is whether Donald Trump Jr., Kushner and Manafort committed a felony by taking the meeting. Trump says in his “code red” tweet that it’s “totally legal and happens all the time in politics.”

Wrong again. Clearly, Trump and his TV lawyer, Rudy Giuliani, want the president’s disciples to believe that “collusion” isn’t a crime. Anyone with functioning gray matter knows “collusion” is a colloquial term, coined to avoid too much legalese. It’s not unlike the difference between the word “czar” and the title “policy adviser.”

While it remains unclear whether the Trumps accepted and received the Hillary materials from Kremlin-linked operatives Natalia Veselnitskaya, Rinat Akmetshin and the rest, we know through Don Jr.’s emails and Trump’s “code red” tweet that the Trumps absolutely solicited the materials (“other things of value”), and Title 52, Section 30121 tells us that soliciting the materials is a felony, regardless of whether Junior walked out of the meeting with a handful of Clinton’s emails.

By the way, it’s also worth noting that two days before the June 9 meeting, on Tuesday June 7, Donald Trump was allegedly informed that the meeting was set. Donald Trump Jr., Kushner and Manafort also reportedly held a meeting to discuss the meeting, indicating the high stakes of the June 9 gathering. It was on that same day, June 7, that Trump announced during a primary victory speech that he planned to reveal dirt about Hillary Clinton, “probably” on the following Monday.

As for Trump’s everyone-does-it excuse, this is also a lie. If conspiracies like this one happen all the time, then it might be helpful to know specifically which politicians are conspiring with hostile foreign governments to subvert our elections. I might be wrong, but that list probably begins with the name “Rohrabacher.” Just a hunch.

Likewise, the Trump Tower gathering wasn’t a random meeting, occurring in a vacuum. Context is everything. The Republican-led Senate Intelligence Committee, as well as U.S. intelligence community assessments so far, explicitly confirm that the “dirt” on Clinton was stolen and curated by Russian GRU intelligence agents working on orders from the Kremlin as part of a massive cyber-attack by Russia against the United States. This ongoing attack was launched with the express purpose of making Trump president. Going by the president's confirmation as well as his son’s emails, we know that the Trumps convened the meeting with the purpose of conspiring with the Russians to spread anti-Clinton materials. Ultimately: collusion.

Any counter-narratives are rendered completely invalid in the face of these facts, especially now that Trump has confessed ... for his son. If there’s anyone who can’t handle the truth, it’s Trump and his loyalists.