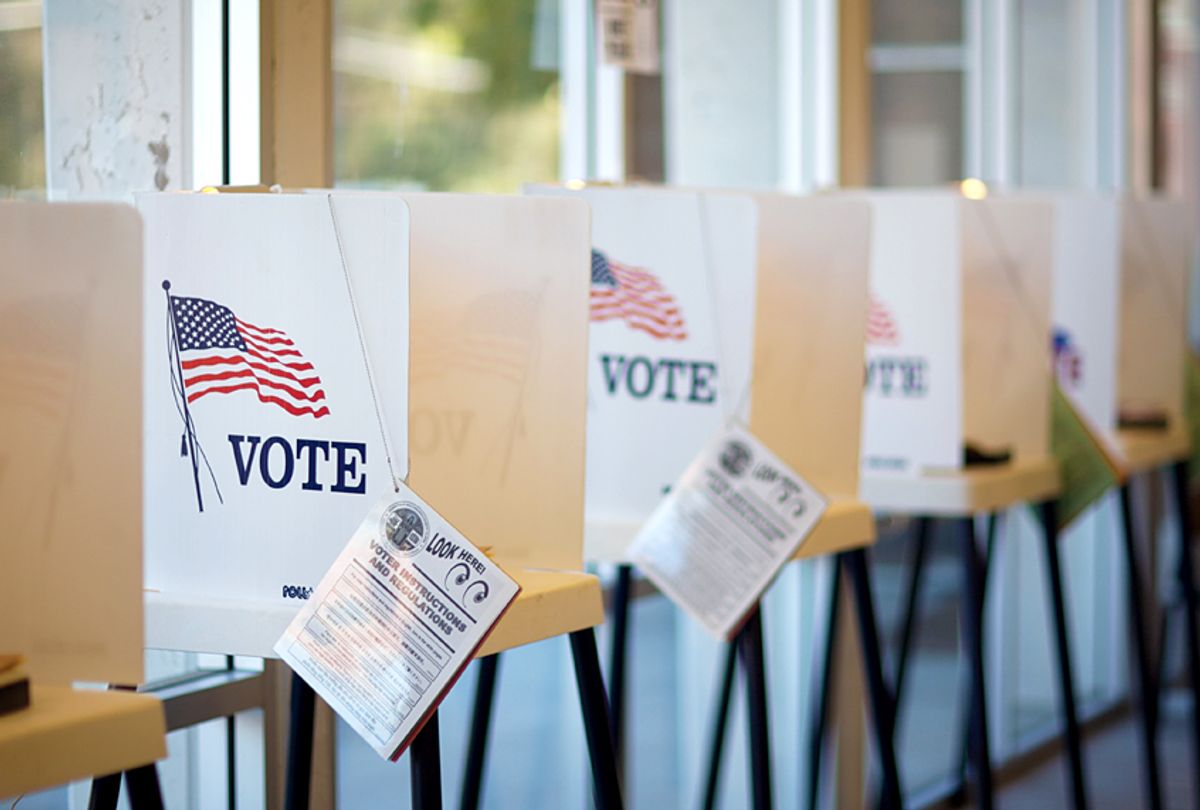 As a key deadline approaches next week on updating statewide voter rolls before the November election, it appears a controversial data-mining operation mostly used by red states to purge legitimate voters is withering, or at least dormant, in 2018.

The Interstate Voter Registration Crosscheck program, known as Crosscheck, has been blasted in the press, academia,legal briefs, and federal court rulings for sloppy analytics that generate tens or hundreds of thousands of suspected duplicate voter registrations in member states. (It uses few data specifics, including common names, producing false positives.) Some of those states have used Crosscheck’s analyses to turn a bland voter roll bookkeeping process (removing dead people, people who moved) into a partisan cudgel. This June, a federal district court issued a restraining order against Indiana election officials to not use Crosscheck to prematurely purge its voter rolls.

Recent national reports about purge trends, such as "Purges: A Growing Threat to the Right to Vote," from the Brennan Center for Justice at New York University School of Law, have detailed Crosscheck’s sloppy methodology and anti-participatory impact. For example, the Brennan report noted that Virginia’s use of Crosscheck’s data in 2013 (when the GOP dominated the state’s executive branch and legislature) resulted in up to a 17 percent error rate.

However, the Indiana ruling and Brennan report (the Brennan Center is part of the team suing Indiana) also contain revelations about Crosscheck’s downward spiral, if not its possible demise. That storyline runs counter to the widespread progressive narrative that voter purges are an enduring and widespread threat in American elections — including in 2018’s midterms.

At the very least, Brennan’s report suggests that Crosscheck is withering in 2018.

“In recent years, at least eight states have left the program altogether and no longer share data with or receive data from Crosscheck,” the "Purges" report said, citing Alaska, Florida, Kentucky, Massachusetts, New York, Oregon, Pennsylvania and Washington in endnoteswhere it added a ninth state. “Arizona informed the Brennan Center that it is no longer participating in Crosscheck.”

“Additionally, seven other states have curtailed their use of Crosscheck data by not using it for the purposes of voter-list maintenance,” it continued, then listing, in its endnotes, Colorado, Georgia, Louisiana, Nevada, North Carolina, South Carolina and West Virginia. Purgeswent on, “Illinois announced it would no longer transmit data to Crosscheck… ‘until security issues are addressed to our satisfaction.’”

That overall tally means that 17 out of the 28 states that were in Crosscheck as of early 2017 have backed away, at least for now. That list of states, that, under a legal memo, agree to share some of their voter data for analytics overseen by the Kansas Secretary of State, comes from a Supreme Court legal brieffiled by ex-Bush administration officials known for overly policing the process. They supported a new purge process in Ohio.

But there’s more going on than a mass exodus or distancing from Crosscheck, as Illinois’ reference to “security issues” alludes. Last fall, Indivisible Chicago, a Democratic activist group, posted documentsonline showing Crosscheck security lapses: emails with logins and passwords; statements that it did not change passwords; and observing that it didn’t encrypt voter data. Since then, some of the attorneys defending Crosscheck in court have acknowledged that the Department of Homeland Security sees Crosscheck as a cyber-security risk. That development led more states to suspend its interactions with it.

(Illinois’ voter registration database was the only known one successfully “penetrated” by Russian hackers in 2016, according to the National Association of Secretaries of State. Thus, the system run by Kansas Secretary of State Kris Kobach, who at that time co-chaired President Trump’s since-disbanded election integrity commission — a panel wanting every state to turn over its voter databases — was an easy hacking target.)

That reality of states leaving Crosscheck for cyber-security reasons was noted in a June federal restraining orderagainst Indiana, barring it from using Crosscheck data in tandem with a just-passed state law that would rapidly purge registered voters — violating federal timetables. U.S. District Court Judge Tanya Walton Pratt’s order noted, “During oral argument, Defendant’s [the state’s] counsel admitted concerns regarding the reliability and security of Crosscheck,” accompanied by this footnote:

“Defendants’ counsel Jefferson Garn (‘Garn’) argued the following: ‘This isn’t a part of the record, but my — what’s going on, I believe, and from my understanding, is that there are, as with many organizations, the federal government, state governments, there are concerns about data breach, and there’s a Department of Homeland Security review being done of Crosscheck right now.’ (Filing No. 62 at 49).

“Thereafter, the Court asked; ‘So are you saying the Crosscheck database process is flawed and they may be subject to data breaches?’ and Garn responded, ‘It’s not because our system is flawed. It’s because we just want to make sure that we’re trying to stay one step ahead of people who are trying to hack. And so that’s the concern.’”

But Crosscheck’s system is flawed. It has seen an exodus or distancing by nearly two-thirds of the 28 states that were members in 2017, when it told these states they had 7.2 million suspicious registrations. And that list of wary states might be an understatement. Kevin Morris, the Brennan researcher and "Purges" report co-author, told the Independent Media Institute that no state appears to be using Crosscheck in 2018 for updating their voter rolls. (Others told IMI that no state has taken its data since 2017.)

“In 2018, it has not been used because of data security problems with the program, but there has not been any report that it will not be used again,” Morris said.

Where have many of the Crosscheck states gone for help in updating voter rolls? At least 11 of them that were members in early 2017 have joined a newer effort called ERIC, or the Electronic Registration Information Center, which identifies all eligible voters in a state and requires its members (now 24 states) to contact those people and urge them to complete the registration process. ERIC uses more specific and deeper data mining, in addition to sophisticated encryption, to help election officials in member states make their voter rolls more accurate, current and cost-efficiently managed.

Those 11 states that were in Crosscheck as of 2017 and are in ERIC are: Alabama, Arizona, Colorado, Illinois, Iowa, Louisiana, Missouri, Nevada, Ohio, South Carolina and Virginia. Some states have been members of both organizations concurrently, with former ERIC officials saying many of these states stopped using Crosscheck’s analytics. (The job of maintaining accurate voter rolls is endless, as people die, move, lose their voting rights if convicted of a felony in 48 states — or register as new voters. That does not make legitimate removals nefarious; it’s only when that is done by partisans to shape the electorateto favor one party that it is foul play.)

Crosscheck’s ongoing demise — and potential exclusion from being used in 2018 due to cyber-security risks — is a major unreported development. It is a pending big victory for people who seek a more inclusive and less predatory system of voting in America.

The 90-Day Deadline for Removals

In coming days, it will become clear whether any of the remaining Crosscheck states will be conducting questionable voter purges before 2018’s midterms. That’s because the law governing voter roll updates and removals — the National Voter Registration Act — bans states from removing voters within 90 days of a federal election (November 6, 2018).

Those states that are not ERIC members, and have not withdrawn or suspended their relationship with Crosscheck (as cited by the "Purges" report) are: Arkansas, Idaho, Indiana, Kansas, Michigan, Mississippi, Nebraska, New Hampshire, Oklahoma, South Dakota and Tennessee. (The Kansas Secretary of State’s office did not respond to IMI’s request to verify the latest Crosscheck members, when it last shared analytics, or to comment.)

Needless to say, voters in states with heavy-handed voting rules should check their registration status to ensure they can vote this November — especially if they moved within the same county, as that’s not likely to transfer. But registering (or re-registering) to vote has never been easier, as three-quarters of the states have online registration and the earliest deadlines fall in early October. Some of the Crosscheck states (Idaho, New Hampshire) also have Election Day registration, meaning one can register and vote.

Whether or not Crosscheck revives itself before the 2020 election remains to be seen. But for now, contrary to the conventional wisdom in progressive circles, it looks like the most notorious voter purge operation in red-run states has been sidelined for 2018’s midterms.