"I may have to say yes," the disgraced former sheriff told Cohen's new character on "Who Is America?" Sunday night 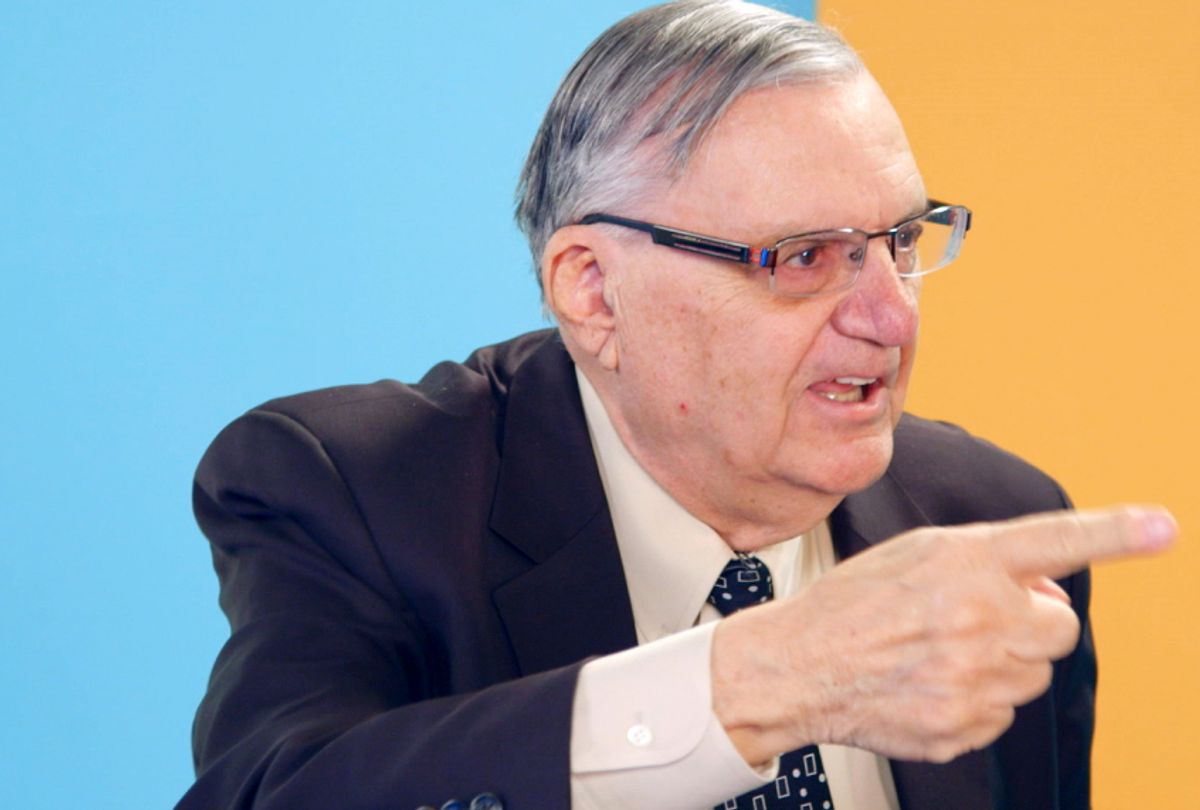 Sacha Baron Cohen unveiled a new character during Sunday night's episode of his Showtime series "Who Is America?," an "unboxing" Finnish YouTube celebrity named "OMGWhizzyBoyOMG." Complete with blonde and blood orange hair, a floral top, and a penchant for "dabbing" — a dance popularized by the Atlanta rap trio Migos — this time, Cohen took on former Maricopa County sheriff Joe Arpaio.

Known as "America's Toughest Sheriff," Arpaio was pardoned by President Donald Trump after being convicting for defying the courts and continuing to illegally detain suspected undocumented immigrants in Arizona. Now, Arpaio is running for the Republican nomination for a U.S. Senate seat in the same state.

As OMGWhizzyBoyOMG unboxed a children's toy, he asked Arpaio to explain to him "what communists are doing to stop people having guns."

"Well, that's a big issue," said Arpaio. "But I will say, over and over again, guns don't kill, people kill."

To continue the debate, Cohen pulled out tiny toy donut for Arpaio to address, because the donut is anti-guns.

"You have to understand," Arpaio said to the donut, "you have to follow the Constitution and the law and allow people to have guns. . . Bad guys are going to get their guns!" he said, while banging on the table.

"It's going to kill you," Arpaio continued, speaking directly to the tiny toy and turning his fingers into a mock gun and pointing it at the donut. "I'm hoping that somebody else in there has a gun and will shoot that person before he shoots you."

Resuming OMGWhizzyBoyOMG, Cohen told the former sheriff, "I have 43 guns. . . I’ve been collecting them for the upcoming race war." Arpaio nodded in what appeared to be understanding.

Cohen then asked Arpaio about what Donald Trump is like. "Great man," he replied. "He's got money, but you know, he doesn’t act like he’s rich."

When Cohen questioned if Arpaio thought Trump has had a "golden shower," Arpaio responded, "wouldn't surprise me," but it was pretty clear that Arpaio wasn't familiar with the fetish term.

"I'll tell you one thing, if he [Trump] sees this, and the way you're speaking, he's gonna like you," Arpaio said. "Because you think like he thinks."

The clip concluded with Baron Cohen asking Arpaio about his first "hand job."

"Whatever I did in my life, I always did that extra," Arpaio said. "It gets me in trouble sometimes," he added, likely referring to his conviction. Baron Cohen then asked Arpaio: "If Donald Trump calls you up after this and says, 'Sheriff Joe, I want to offer you an amazing blow job,' would you say yes?"

Jennifer Lawrence, who is Arpaio's communications director for his senate run and a former Breitbart reporter, published a statement on Twitter about Arpaio's appearance on the Showtime series.

"For all the joyless buzzkills, it's obvious Joe couldn't fully understand Borat," Lawrence says in the statement. "That's why they had to subtitle Borat's character. Otherwise, people wouldn't be able to fully understand the questions, like Sheriff Arpaio couldn't fully understand him when it was filmed. We're not mad about it, it's comedy."
In a separate tweet, Lawrence wrote, "Thanks a lot @SachaBaronCohen and @SHOwhoisAmerica it’s not going to be awkward at all explaining to @RealSheriffJoe what you meant by 'golden shower'. You sicko".

Thanks a lot @SachaBaronCohen and @SHOwhoisAmerica it’s not going to be awkward at all explaining to @RealSheriffJoe what you meant by “golden shower”. You sicko 😉😂😂😂

Arpaio revealed last month that he was among the many public figures who had been duped by Cohen. He told Breitbart, "I felt uncomfortable with some of the words they were using but I had to live through it. I am not the type of guy who gets up and walks out. I never walked out in thousands of interviews. I just take it,"