With about 13 times the mass of Jupiter and a visible aurora, this strange world opens new doors for astronomers 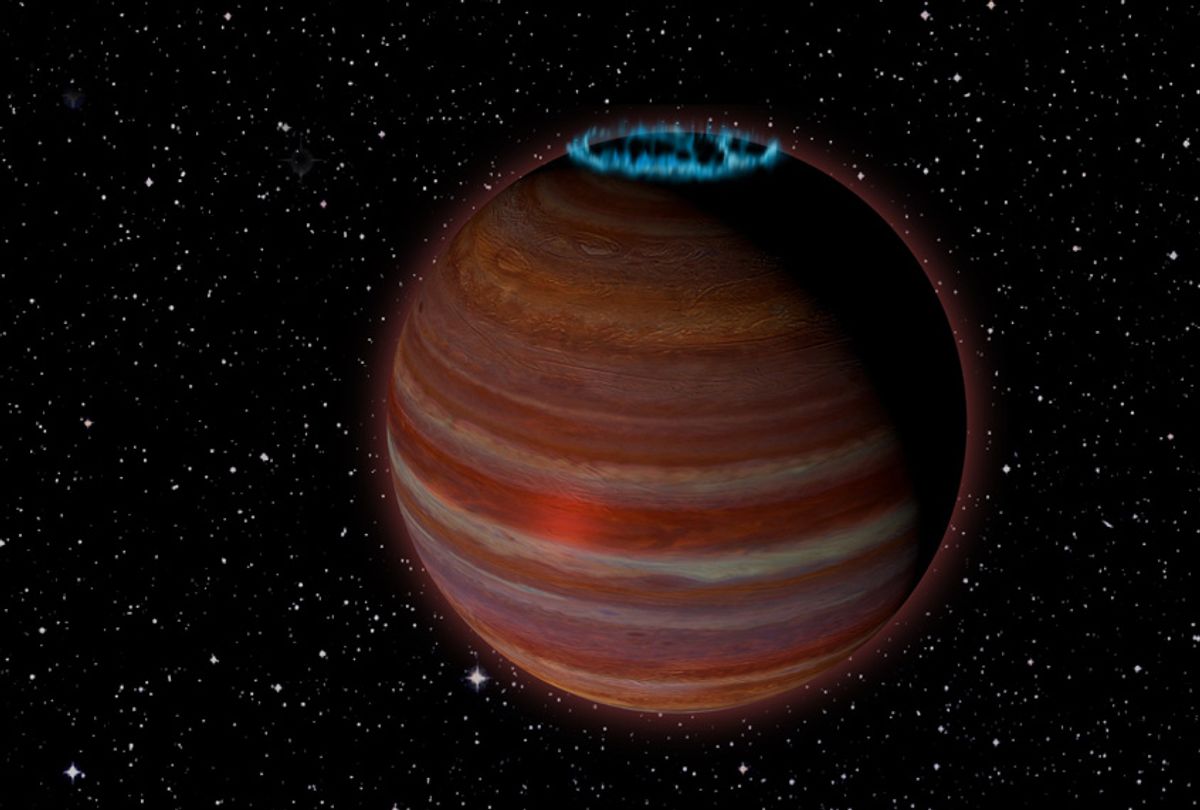 It’s more than 12 times the size of the biggest planet in our solar system, Jupiter, has a magnetic field 200 times more powerful, and lives 20 light years outside of our solar system. Yet unlike Jupiter, it has no parent star around which it orbits.

So what is it?

It’s a rogue planet. The newly discovered planet was found drifting alone – no host star in sight – with a glowing aurora that has left scientists with questions.

A study published in the Astrophysical Journal last week evaluated this floating mass in more detail; and although it was discovered in 2016, up until now it was thought to be a brown dwarf,  a failed star dimmer than a red dwarf star but larger than the largest gas giants. . Yet this particular , object turned out ot be younger and less massive than scientists originally thought, which opened the door to the revelation that this cold, wandering sphere may, in fact, be a planet instead.

According to the National Radio Astronomy Observatory, scientists tend to look for something called the “deuterium-burning limit” when trying to distinguish between whether or not a mass is a planet or a brown dwarf. Deuterium, an isotope of hydrogen with one neutron and one proton, is involved in the lowest-temperature fusion-burning reactions, the fusion process being the engine that heats and powers stars; a stellar object that burns deuterium (and/or heavier elements) may constitute a star, rather than a planet or another object.  At 12.7 Jupiter masses, this rogue planet is just shy of the limit at which deuterium nuclei have sufficient density and heat to fuse into helium, which begins at approximately 13 Jupiter masses.

“This object is right at the boundary between a planet and a brown dwarf, or ‘failed star,’ and is giving us some surprises that can potentially help us understand magnetic processes on both stars and planets,” Melodie Kao, a lead author of the study, said in a statement.

The discovery of the object, officially named SIMP J01365663+0933473, was unique for several reasons. Not only was it inexplicably glowing, and moving about alone, but it was also found using solely detections of its radio emissions — a-never-before-used technique for finding new rogue planets.

Rogue planets are not new, but as far as exoplanet discoveries go, they have a fairly recent history. The first one was theorized in the 1960s, but one was not actually found until the 1990s. Perhaps with this new form of radio emissions detection, many more will be found in the future.

“Detecting SIMP J01365663+0933473 with the VLA [Very Large Array] through its auroral radio emission also means that we may have a new way of detecting exoplanets, including the elusive rogue ones not orbiting a parent star,” Gregg Hallinan, of Caltech, said in a statement.

The glow is another mystery of the planet. While auroras are not uncommon – we see them here on Earth, most often from the North and South poles, where Earth’s magnetic field lines emanate – they are typically a product of a planet’s magnetic field interacting with particles from the sun, in the form of solar winds. And since this rogue planet doesn’t orbit around a sun, it only has half of that equation.

So without solar winds interacting with its magnetic field, how does the rogue planet get its auroral glow? Scientists aren’t exactly sure, but one hypothesis is that the glow comes from stray particles from an orbiting moon or other planet.

Despite all the unknowns about this celestial mass, its discovery may prove to be promising for future research on objects outside of our own solar system.

“This particular object is exciting because studying its magnetic dynamo mechanisms can give us new insights on how the same type of mechanisms can operate in extrasolar planets — planets beyond our Solar System,” Kao said. “We think these mechanisms can work not only in brown dwarfs, but also in both gas giant and terrestrial planets.”