The council says "the honor no longer exists" after his many attacks on women, immigrants, Muslims and more 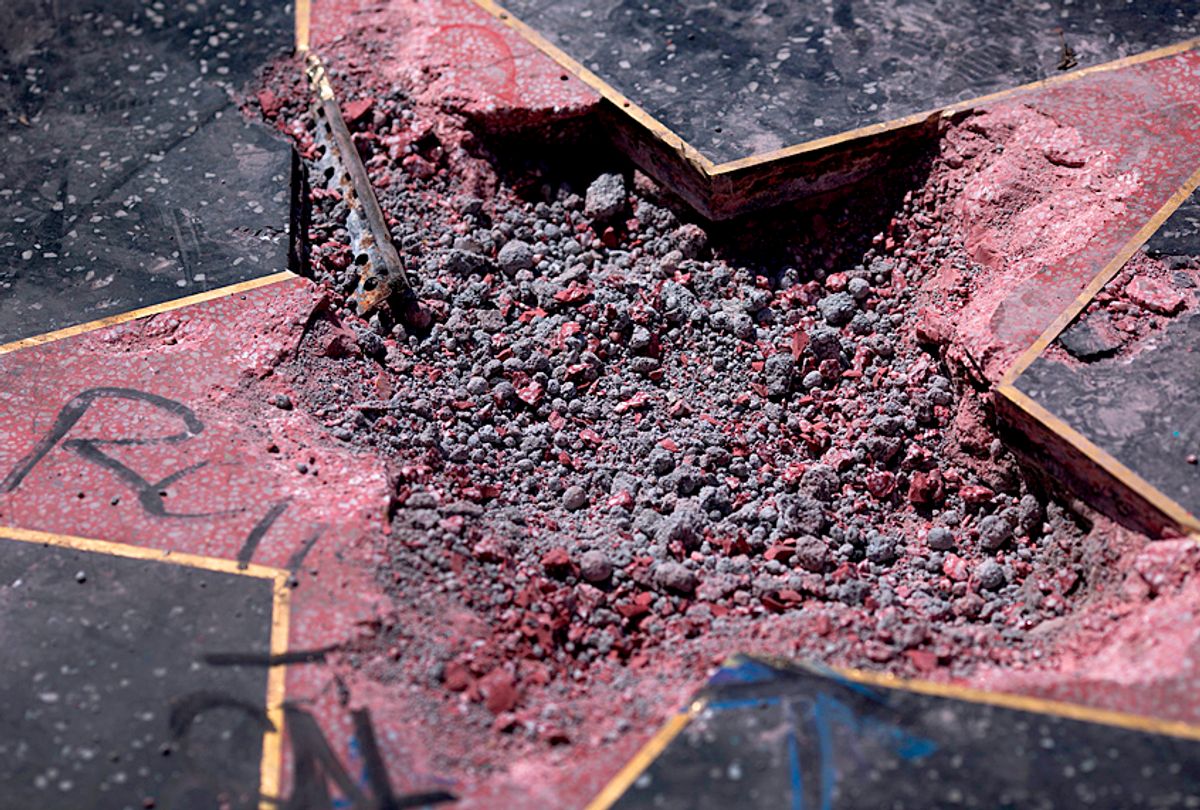 Rubble remains in the place where the Star of Donald Trump on the Hollywood Walk of Fame was destroyed by a vandal on July 25, 2018 (Getty/David McNew)
--

The West Hollywood City Council wants President Donald Trump's star on the Hollywood Walk of Fame removed. The neighborhood's City Council voted Monday night on the matter and passed a resolution that urges the eviction of Trump's star, according to NBC News.

The council's report cites Trump's "disturbing treatment of women and other actions that do not meet the shared values of the City of West Hollywood, the region, the state, and country." The report also notes the multiple allegations of sexual abuse against the president, the Trump administration's separation of immigrant children from their parents and Trump's disparagement and disbelief of the intelligence community.

"The West Hollywood City Council did not pass the resolution because Donald Trump is a conservative or a Republican," West Hollywood Mayor John Duran said in a statement to NBC News. "Earning a star on the Hollywood Walk of Fame is an honor. When one belittles and attacks minorities, immigrants, Muslims, people with disabilities or women — the honor no longer exists."

However, the council does not have authority to remove stars from the Hollywood Walk of Fame, so it will share the resolution with the two authorities which do, the Los Angeles City Council and the Hollywood Chamber of Commerce.

The council's report also explained that Trump's star has been damaged and destroyed since he began his campaign for president and that the City of Los Angeles uses taxpayer funds to replace it.

Just weeks ago, the star was smashed by a culprit reportedly using a pickaxe, which he concealed in a guitar case. "All that was left of the star was a jagged hole in the ground, and pieces of concrete and the star were left strewn about the sidewalk by the time police arrived," CBS' Los Angeles affiliate KCAL reported.

Before that, in the lead-up the presidential election in 2016, "a man dressed as a construction worker was filmed destroying the star using both a pickaxe and a sledgehammer after the infamous Access Hollywood tape was leaked, which revealed Trump's past brags about sexually assaulting women," my colleague Shira Tarlo reported.

Following the vandalism, Gubler told ABC News that it would cost up to $10,000 to repair the star. "It's mostly the cost of the labor," he added. "The stars are composed of the brass symbols and the terrazzo is concrete with marble chips, so it's a process. It takes quite a bit of work — several hours worth. It'll take several days to season before they can polish and restore it."

Trump received a star in 2007 for producing the Miss Universe pageant.