"Star Trek" seeks out new life for Jean-Luc Picard: Why he's the captain we need now more than ever 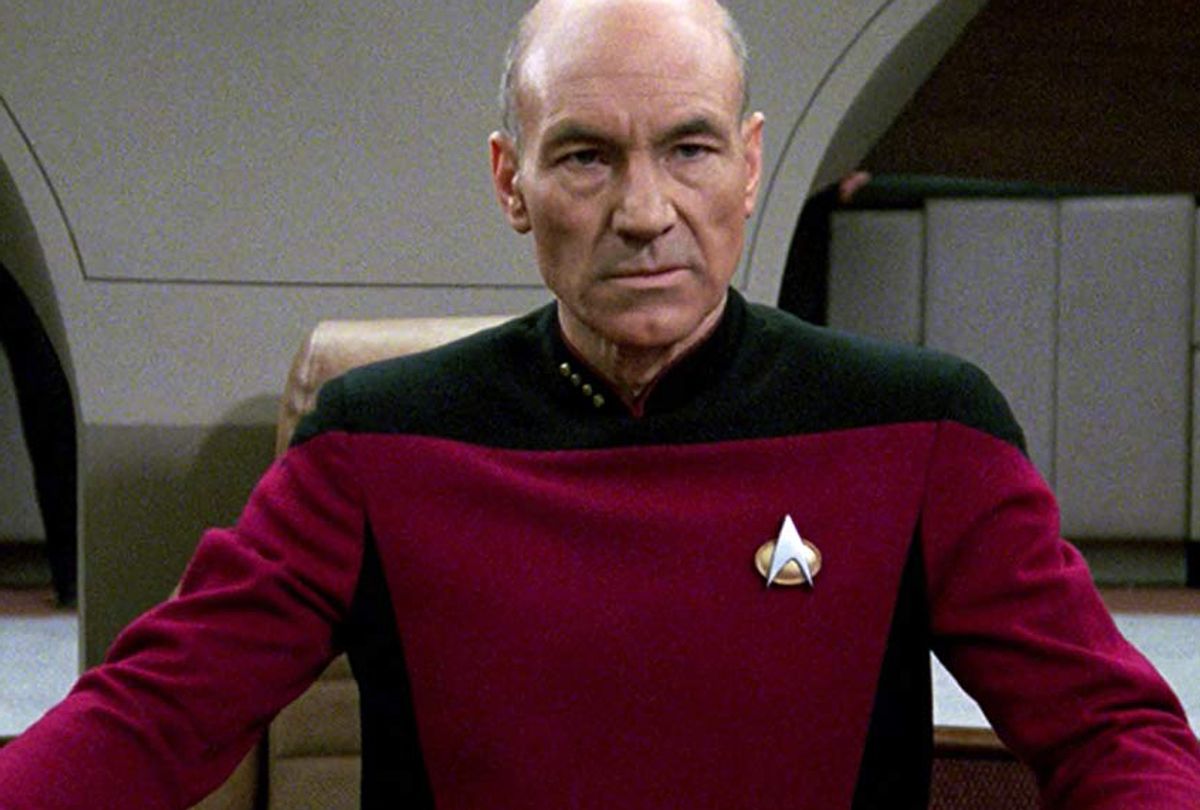 Patrick Stewart as Jean-Luc Picard in "Star Trek: The Next Generation" (CBS/Paramount)
--

Captain Jean-Luc Picard represents a past version of an imagined future, a man conceived of in a time when we believed we were almost beyond such primitive ills as racism, environmental decline, degradation of knowledge or a dismissive view of science. That time was the late 1980s and early 1990s when "Star Trek: The Next Generation" was on the air.

In the midst of its seven-year mission, between 1987 and 1994, came the worldwide commodification of Earth Day and a commercialized version of environmentalism. Visions of the United Colors of Benetton danced through magazine ads, and well-meaning figures preached the necessity of "seeing no color."

If the "Trek" universe presented a leader like Picard, a genteel yet firm boss with a deep appreciation for Shakespeare, Earl Grey tea, expansive thinking and universal understanding, it may be because back then, we all thought we were just shy of getting to a better place with regard to how we treat each other. Of thinking beyond ourselves, our immediate desires and thirst for gratification, and embracing our differences as strengths. It was a lovely illusion.

And yet Picard and everything he stands for looms large, real and true to us more than two decades after the show left the air.

On a molecular level, this may be part of the reason so many people lost what's left of their minds, in a good way, at the news that Sir Patrick Stewart will be reprising Jean-Luc Picard for a new "Star Trek" series on CBS All Access, the streaming home of "Star Trek: Discovery."

"Gradually it became clearer and clearer to me, the power of that show, the success of that show, the benefits that it gave" its viewers, Stewart told fans on Saturday in Las Vegas, where he and "Star Trek: Discovery" executive producer Alex Kurtzman and Sir Patrick broke the news at a "Trek" convention.

Soon social media informed the rest of the world, with many finding out via the good knight's Instagram.

I will always be very proud to have been a part of Star Trek: The Next Generation, but when we wrapped that final movie in the spring of 2002, I truly felt my time with Star Trek had run its natural course. It is, therefore, an unexpected but delightful surprise to find myself excited and invigorated to be returning to Jean-Luc Picard and to explore new dimensions within him. Seeking out new life for him, when I thought that life was over. During these past years, it has been humbling to hear stories about how The Next Generation brought people comfort, saw them through difficult periods in their lives or how the example of Jean-Luc inspired so many to follow in his footsteps, pursuing science, exploration and leadership. I feel I'm ready to return to him for the same reason – to research and experience what comforting and reforming light he might shine on these often very dark times. I look forward to working with our brilliant creative team as we endeavor to bring a fresh, unexpected and pertinent story to life once more. #StarTrek @cbsallaccess Photo: @shervinfoto

Now the speculation begins, since few details have been revealed about this new generation of episodes, beyond knowing that new series will follow the next chapter of Picard's life. The series is still in nascent development stages, so the only teaser Stewart could provide was that the series picks up 20 years after the last time we saw Captain Picard, which was in "Star Trek: Nemesis." "He may not, and I stress, may not be a captain anymore," Stewart told fans. "He may not be the Jean-Luc that you recognize and know so well."

Understandable. People change. But hopefully Starfleet's finest captain hasn't transformed so much as to be completely unrecognizable.

Allow me to pause for a moment to say I do not identify as a hardcore Trekkie or Trekker; nor am I moved to ponder the difference between those definitions. I don't belong to either church. But that speaks to Picard's popularity: he opened the "Star Trek" universe not only to new generations of viewers, but to the casual cruisers as well.

Stewart, for his part, gave his character a statesman-like quality that somewhat eluded William Shatner's Kirk. Both starship officers favor diplomacy, but Stewart's version has a bit more class to it while '60s-era Shatner seemed to lean on his powers of seduction to get out of more than a few binds.

"Impossible" is not in Picard's lexicon. He's a man who urges his crew to "Make it so" and "Engage," who mounts eloquent defenses of the least of the universe's beings so potent as to shift the viewpoints of his adversaries. He knows when to seek advice as well as when to simply sit in silence, to listen and consider.

And among all "Star Trek" captains, Picard remains the perennial favorite. Anecdotal evidence abounds — entire relationships have been forged or broken with debates over who is the best "Star Trek" captain — but StarTrek.com attained some data in 2012 with a poll, taken by more than 50,000 people, asking users to rate the franchise's captains on four categories. Picard tops the lists for "Most Decisive," "Most Intelligent," and "Most Inspiring." The only category he didn't win was "Most Courageous"; but that went to Kate Mulgrew's Kathryn Janeway of "Star Trek: Voyager" who, after all, defeated the Borg and ushered her crew home with zero resources or Starfleet back-up.

The "Star Trek: The Next Generation" writers also made Picard a man who supports his crew to the last member, who behaved toward them with paternal care as oppose to patriarchal lordship. And Stewart forged him into a gentleman of fierce conviction and boundless understanding — a truth-seeker who cherished the wisdom of the Prime Directive of Non-Interference, meeting representatives of other species and unfamiliar lifeforms where they are.

To paraphrase a line said to him in the "TNG" series finale by the omnipotent being known as Q, he is a man willing to move beyond "mapping stars and studying nebulae"  in favor of " charting the unknowable possibilities of existence."

Television comforts us with visions of existence that are populated by lives differing from our own by mere ticks on the wheel of fate. The blanket and somewhat amorphous term for this is "relatable." That is, we see characters as individual versions of who we aspire to be or would never want to meet, and we process them via singular, separate visions of a known universe.

The same can be said of the "Star Trek" television galaxy, from "TNG" to "Deep Space Nine," from "Voyager" to "Star Trek: Enterprise." Surely the franchise's devoted harbor affection for each series and its captain for different reasons and various levels of passion. (Scott Bakula's Captain Jonathan Archer appears to be, shall we say, underappreciated compared to his peers.). Its Starfleet captains, however, personify broader philosophies of how we contend with the unknown, filtered through the eras we know.

Gene Roddenberry's original Starship Enterprise crewmembers are flesh and blood examples of what can be achieved were society to grow beyond petty arguments and discord, and in "Star Trek" he gave us a multi-ethnic cast that made history by, among many other things, showing the very first interracial kiss on television.

"The Next Generation" is not as ethnically diverse, one of its noticeable flaws (somewhat ameliorated by granting the "Trek" franchise its first African American Commanding Officer and Captain in "Deep Space Nine" with Avery Brooks' Benjamin Sisko). What it achieved when it first aired, however, was to invite viewers to once again think beyond the world in front of them.

Between then and now moviegoers have been introduced to J.J. Abrams' version of the "Star Trek" universe, a place with more explosions, space battles and combat than pauses to consider ethical quandaries. That paradigm also dominates "Star Trek: Discovery." Set in the years prior to Captain Kirk's time on the deck of the Starship Enterprise, this series places the crew inside a war and is laden with thinly veiled allusions to current American politics. A point raised time and again by the men and women of Discovery is that they signed on to forward the cause of science — that they are explorers, not soldiers.

Captain Gabriel Lorca (Jason Isaacs) dismisses that outright; with the Federation's survival on the line, diplomacy takes a back seat to raw firepower and scorched Earth attacks. It is an action thriller that asks philosophical questions along the way as opposed to the other way around, acting first and thinking about the longer term ramifications later. This raises the possibility, even the necessity, of Picard's series offering an optimistic balance to that. "Discovery" is our American politics reflected in a cloudy mirror, a vision that puts a "win or die" model of interaction with foreign peoples at the fore.

In the "Star Trek" franchise's chronology, "Discovery" is in the past. We need Picard to remind us to visualize that even given our present circumstances, an infinitely better future is still possible.