How did Alex Jones become possible? Because we tolerated "lesser" lies for too long

Right-wingers have gotten away with ridiculous lies for years. No wonder they're going all in for Alex Jones 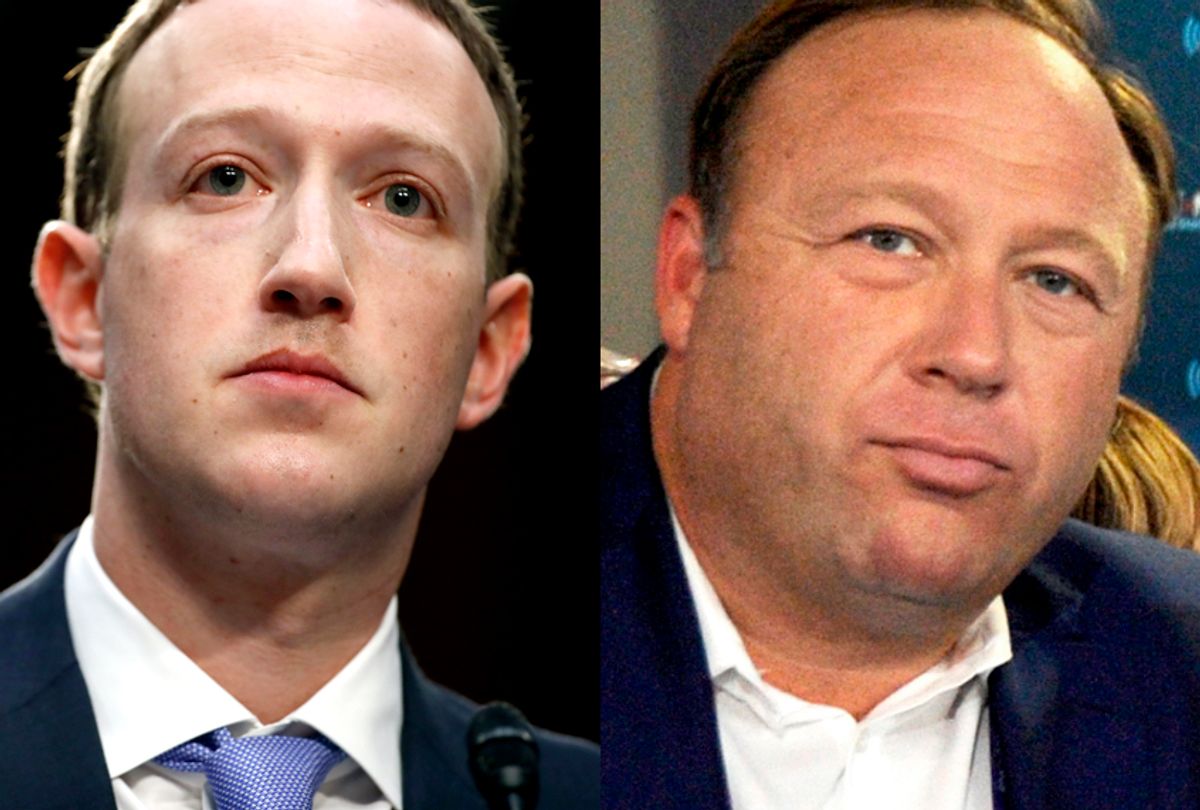 This week, in a sudden bout of atypical decency and common sense, a cavalcade of social media companies and content platforms — including YouTube, Spotify, Apple and Facebook — finally banned Alex Jones and his media empire Infowars.

The move was long overdue, as Jones has spent his whole career peddling not just right-wing disinformation, but the worst kinds of conspiracy theories, demonizing innocent people and running cover for legitimate villains. Jones has used his platform to terrorize the families of shooting victims, even parents of the Sandy Hook children, by suggesting they are "crisis actors" participating in a massive hoax. On the flipside, he's denied violence committed by actual murderers, claiming that Timothy McVeigh was a "patsy" and that arguing that David Koresh, who impregnated 12-and-13-year-olds and almost certainly ordered a mass suicide that killed multiple children, was an innocent victim.

It's a sign of how trollish and amoral conservatives have become that their instinct was to rush forward and claim that it was an assault on free speech for online platforms to refuse to distribute the steady stream of lies and defamation that pours out of Infowars. Most of these folks didn't even pause for breath between trying to get writer Sarah Jeong fired from the New York Times for jokes mocking racists to declaring that "free speech" requires private companies to signal-boost an amoral monster like Jones. Such bad faith isn't merely a tool of the right. It's the central organizing feature of the troll lifestyle that they've created for themselves.

What's going on here is not a mystery. American conservatives long ago decided that nothing mattered more than winning. They won't hesitate to support harassment, defamation, disinformation or, as we're now learning, possible treason, if they feel the end result will be a few more votes for the Republican party.

But the whole Jones debacle highlights a very real problem that social media and other content platforms have to contend with: Where do you draw the line? Jones may be on the fringe, but his show was linked to the Republican mainstream in the sense that most of the American conservative movement functions by peddling disinformation and, in many cases, conspiracy theories. Banning all disinformation from these sites would mean wiping out the vast majority of right-wing content, which would no doubt result in even more squalling that we're hearing now. But the current situation, where some lies cross the line but others don't, is a muddled mess that allows for all the bad-faith posturing about "free speech" that's going on now.

Facebook and other organizations have elided the problem by reaching for words like "hate speech" and "harassment" and ignoring the issue of Jones constantly saying stuff that is flat-out false. That's happening despite all the attention paid to "fake news" distributed on Facebook and other outlets and the half-hearted attempts, always fiercely resisted by the right, to make it harder to use Facebook to spread disinformation.

One would think that the difference between true and false statements would be an easier line for Facebook to draw than the more ambiguous "hate speech" standard, which carries an inescapable element of subjectivity. But Facebook head Mark Zuckerberg has repeatedly expressed discomfort with wading into the realm of fact-checking and policing false information.

In a recent interview with Recode, Zuckerberg said that while he finds Holocaust denialism "deeply offensive," he doesn't "believe that our platform should take that down" because he doesn't believe Holocaust deniers are "intentionally getting it wrong" and because it's "hard to impugn intent and to understand the intent."

Here's what is so frustrating about this discussion: You don't need to impugn intent in order to characterize false information as false, especially if the person distributing it, like Jones, is releasing an endless stream of flatly false claims, rather than an occasional misstatement that any person could make. Sure, the person who says untrue things all the time could be delusional rather than a shameless liar, but ultimately, should that even matter? The problem is that they keep injecting misinformation into the public bloodstream, and regardless of intent that needs to stop.

It's not quite fair to blame Mark Zuckerberg personally for this particular problem, because misinformation isn't just about "fake news" or the blatant fictions of Infowars. It goes straight to the heart of Republican politics, even before the party nominated a conspiracy theorist and con man to be their presidential candidate. Making false claims, intentionally or otherwise, has been a central Republican tactic for decades, and it's just getting worse.

Take climate-change denial as the primary example. There's a widespread, tacit acceptance in the mainstream media that it's normal for Republican politicians to "believe" that climate change is a hoax. (Even though that wasn't universally true even 10 years ago.) This is taken as somehow categorically different and less awful than, say, claiming that a mass shooting of children is a hoax.

But is it really all that different? In both cases, the person is apparently claiming that a widespread fiction has been created to trick the public into embracing certain policies, and that the hoaxers are so powerful they are able to hoodwink the media, the government and the public at large into believing them. In both cases, the conspiracy being posited would require literally thousands of people to pull it off and then to be quiet about it for decades. With climate-change denialism, there's even the suggestion that the conspiracy is worldwide, requiring a level of organization and secrecy that is frankly impossible for real-world human beings to pull off.

In both cases, the impact of the conspiracy theory is so horrible it's hard to contemplate. With conspiracy theories about mass shootings, surviving family members are harassed and hounded, even forced to move to escape their tormenters. With Pizzagate, we've already seen an armed vigilante holding a restaurant hostage because he believed lies about pedophiles organizing there.

But with climate change, a more socially acceptable conspiracy theory, the cost of indulging the lie is death. People are dying from heat, people are dying from floods and people will die from resource wars — all because we were too crippled by a conspiracy theory to take action to reduce greenhouse-gas emissions when that could have prevented or mitigated this catastrophe.

The reason we have Infowars, and have conservatives defending it, is because we — the public, the media, politicians — didn't do enough to stand up to the rising tide of right-wing lies a decade ago. We politely agreed to treat empirically false claims on everything from climate change to economic policy as if these were matters of opinion on which reasonable people could disagree, rather than a question of one side flat-out denying actual reality. So we shouldn't be surprised now that conservatives feel emboldened enough to back up the guy who accuses innocent people of being pedophiles or faking children's deaths.

Kicking Infowars off social media is a good start, but to get our disinformation epidemic under control, more drastic measures need to be taken. Gatekeepers of all sorts, journalists in particular, need to become more active in fighting back and challenging conservatives on their lies, including those that have been falsely categorized as differences of opinion. We gave them an inch and they took a mile. It was a massive mistake that should never be made again.

Salon's Amanda Marcotte on how the conservative movement was devoured by hate and bigotry.