Speculation about whether they benefited from "chain migration," a policy Trump wants to end, abounds 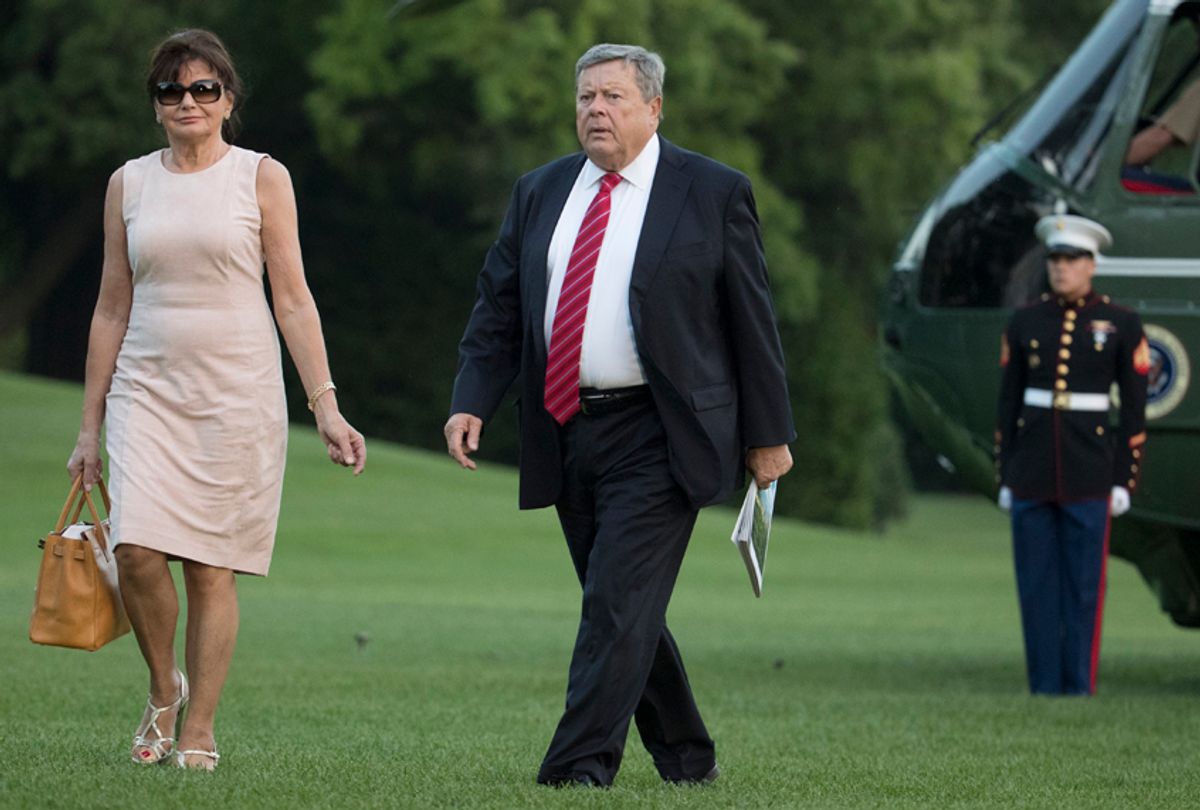 Viktor and Amalija Knavs, the parents of first lady Melania Trump, walk from Marine One across the South Lawn to the White House in Washington, Sunday, June 11, 2017. (AP/Carolyn Kaster)
--

"It went well and they are very grateful and appreciative of this wonderful day for their family," Wildes said in a statement to the outlet, which also reported that the first lady declined to comment on the news.

In February, Wildes told the Washington Post that the Slovenian couple held U.S. green cards, allowing them to live and work in the U.S. indefinitely and with a clear path to citizenship.

"I can confirm that Mrs. Trump’s parents are both lawfully admitted to the United States as permanent residents," he said. "The family, as they are not part of the administration, has asked that their privacy be respected, so I will not comment further on this matter."

Wildes, however, did not confirm how the Knavs obtained green cards, which has left people speculating that the couple was sponsored by Melania as part of the family-based migration policy that Trump has criticized repeatedly.

Matthew Kolken, a partner at a New York immigration law firm, said there are only two substantive ways Trump’s in-laws could gain green cards: through sponsorship by their daughter or an employer. The latter is unlikely, he said, as it would require evidence that there were no Americans who could do the job for which they were hired.

David Leopold, an immigration lawyer and a past president of the American Immigration Lawyers Association, said the first lady’s sponsorship of her parents appears to be the only reasonable way they would have obtained green cards because the process currently gives preferential treatment to parents of U.S. citizens.

It is highly unlikely that the Knavs' green cards were sponsored by an employer, as Viktor, 73, who worked as a chauffeur and car salesman and Amalija, 71, who worked as a pattern maker, are both retired. The Knavs have been seen frequently in Washington since Melania and Barron Trump moved there. And as of 2007, Viktor used Mar-a-Lago as his home address, according to public records obtained by the Post.

The largest share of U.S. green cards are given out because of familial connections, CNN reported, a fact that critics of immigration typically highlight. "Advocates for restricting legal immigration have pointed to the imbalance in favor of family connections as evidence of the need for reform, calling for a 'merit-based' system that would choose immigrants based on need in the US," CNN added.

While such family connections can include one's parents, adult siblings and adult children, President Trump wants to ween this down substantially. In his State of the Union address on January 30, he proposed an immigration plan that he claimed "protects the nuclear family by ending chain migration."

"Under the current broken system, a single immigrant can bring in virtually unlimited numbers of distant relatives," Trump said. "Under our plan, we focus on the immediate family by limiting sponsorships to spouses and minor children. This vital reform is necessary, not just for our economy, but for our security and our future."

The news about her parents has also reignited inquiry into the hazy history of Melania's own path to citizenship. "Wildes, her attorney, has said that she first came to the United States from Slovenia in 1996 for modeling work, first on a visitor’s visa and then a work permit. In 2000, he said, Trump sponsored herself for a green card based on her 'extraordinary ability' as a model," the Post reported.

But few clarifying details about Melania's eligibility for "extraordinary ability" have emerged. It's a category that is usually deployed for esteemed people like Nobel Prize winners. Melania became a U.S. citizen after she married Trump.

Since Melania moved to the United States and became a U.S. citizen, her older sister Ines has also immigrated and lives in a Trump-owned building in New York, according to public records obtained by the Post.

Critics of Trump's immigration stance were quick to speak out. Karine Jean-Pierre, a former Barack Obama aide, tweeted, "'Chain Migration' a word I hate is only good for Donald Trump’s in-laws (parents of @FLOTUS). But families who come here to escape violence and poverty looking to the United States for asylum get to be locked up in cages."

“Chain Migration” a word I hate is only good for Donald Trump’s in-laws (parents of @FLOTUS). But families who come here to escape violence and poverty looking to the United States for asylum get to be locked up in cages. https://t.co/yt87yjR6Fi