The Parker Solar Probe is going to the Sun's corona, a first for humankind 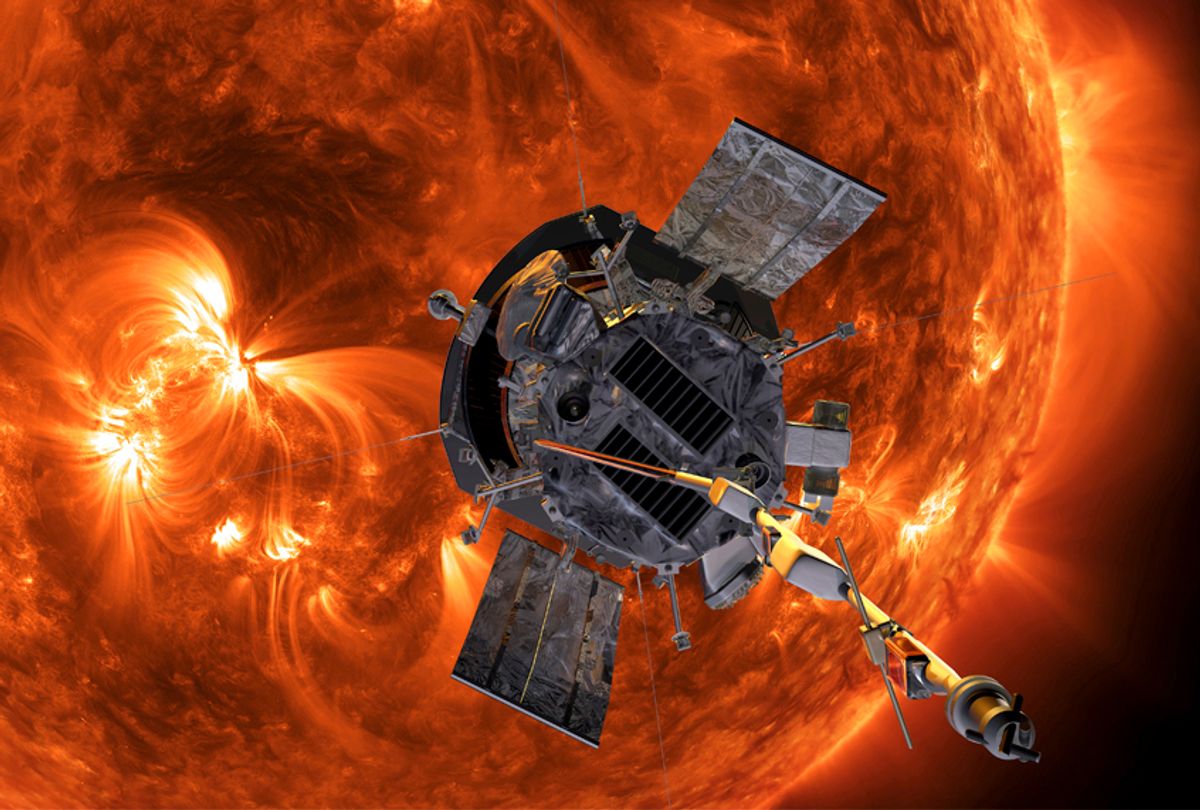 This image made available by NASA shows an artist's rendering of the Parker Solar Probe approaching the Sun. (AP/NASA)
--

Icarus, the son of Daedalus in Greek mythology, is fabled to have flown too close to the sun, which melted his wax wings and sent him plummeting back down towards Earth.

NASA’s car-size Parker Solar Probe — which will likely launch early Saturday morning, provided the weather is agreeable — has a 4.5 inch thick shield made of an advanced carbon composite to prevent it from suffering Icarus’s fate. If all goes as planned, the Parker Solar Probe will arrive at its closest proximity to the sun in 2025.

Getting that close to our parent star would be a historic first for a man-made spacecraft. The sun is about 860,000 miles in diameter, meaning a 4-million mile distance is only 5 sun widths away. (Earth, in contrast, is around 93 million miles from the sun, or 110 times the diameter of the sun.) Mercury, the nearest planet to the sun, is 36 million miles away, or some 9 times further than the Parker Solar Probe’s nearest point.

The record for the closest that a man-made spacecraft has previously come to the sun is held by the Helios 2 probe, a joint West German and US craft that launched in January 1976 and achieved perihelion (closest approach) at 26.9 million miles from the sun, on April 17 1976. Like the Parker Solar Probe, the Helios missions were designed to study the sun’s inner workings; specifically, Helios 2 observed solar winds and the sun’s electric and magnetic fields.

Due to its incredibly close approach, the Parker Solar Probe will fly through the Sun’s corona, which no spacecraft has ever done before. The corona, a thin shell of plasma that extends for about 3 million miles from the sun’s surface, emits much less light than the sun itself, yet it plays an important role in solar winds that can affect Earth. The Sun’s corona manifests as wispy lines that extend from the sun’s surface, and is visible clearly during a total solar eclipse as a “halo” around the sun.

Because of the Parker Solar Probe’s incredibly close approach, NASA’s communications team have called it “humanity’s first visit to a star.” “NASA's historic Parker Solar Probe mission will revolutionize our understanding of the Sun, where changing conditions can propagate out into the solar system, affecting Earth and other worlds,” NASA’s PR division wrote. “Parker Solar Probe will travel through the Sun’s atmosphere, closer to the surface than any spacecraft before it, facing brutal heat and radiation conditions — and ultimately providing humanity with the closest-ever observations of a star.”

The Parker Solar Probe is also unique for the manner by which it is arriving at the sun — namely, by using the gravity of Venus to slow itself down over seven flybys over seven years. Though it sounds bizarre, the laws of physics allow for any two objects with mass to exchange their momentum in a manner that speeds one up while slowing the other down. This method that is frequently used to send spacecraft to distant reaches of the solar system without using as much fuel to speed up as they would have otherwise. In the case of the Parker Solar Probe, Venus will actually speed up ever so slightly as the Parker Solar Probe slows down in return.

The Parker Solar Probe will take seven years before it has its closest pass to the sun, which will happen in 2025, but will whip past our parent star about once a year until then, taking data on solar activity and helping scientists on Earth in their ability to detect space weather caused by our star.