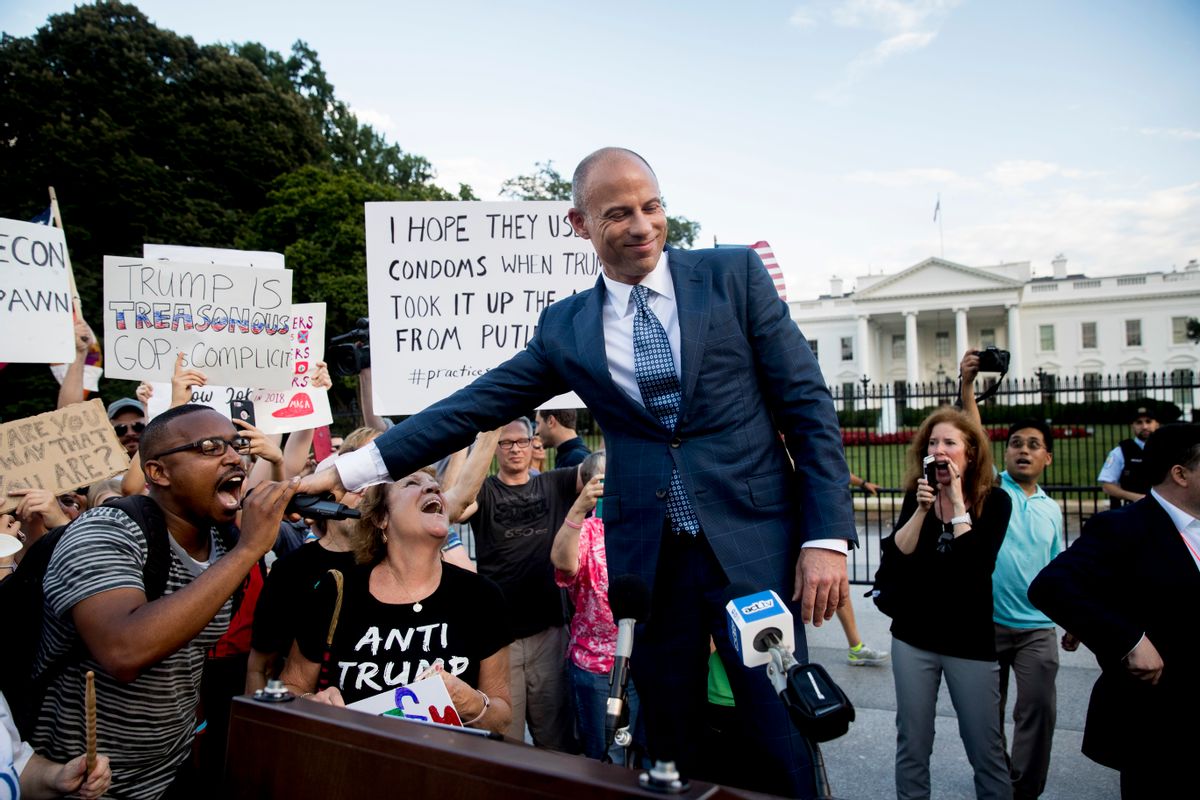 Michael Avenatti, the ever-present attorney representing adult-film star Stormy Daniels, turned into a presidential candidate in Iowa late this week. A constant foil to President Donald Trump, Avenatti positioned himself as the one person who can bring down this White House.

Avenatti joined a litany of presidential hopefuls who descended onto Iowa this week. As the Iowa Sate Fair raged on in Des Moines, Avenatti made an appearance at the Iowa Democratic Wing Ding Dinner, a popular fundraiser for presidential candidates.

Days earlier, Avenatti told the Des Moines Register that he was "exploring a run for the presidency." He said that he came to Iowa to listen to people and learn about some of the issues they face. He wanted to "do my homework."

Not known for being a policymaker, or any type of politico for that matter, Avenatti tried to portray himself as an outsider who is uniquely equipped to defeat Trump.

"What I fear for this Democratic Party that I love so much is that we have a tendency to bring nail clippers to a gunfight," he said in an almost 30-minute speech Friday night. "I believe that our party, the Democratic Party, must be a party that fights fire with fire."

"I know some of you may disagree with me. The answer to Donald Trump, you may say, is to do just the opposite of Donald Trump. Being noble, being kind, being classy. And I am all for each of those things," he said. "But tonight, with our country under an unprecedented assault by a con man who fights only for himself and degrades the vulnerable and the powerless and regular hardworking people day in and day out, I believe that we must honestly ask ourselves as a party whether those we fight for can afford our gentleness."

Like Trump, Avenatti knows how to market himself. He is quick to note that, as a lawyer, he typically represents the underdog in battles between David and Goliath.

It is that experience that Avenatti said he can bring to a presidential race.

"Look, we have all been taken advantage of before. One thing I know from my work as an advocate is that decent people get conned all the time," he said. "And let's face it: Trump is a very good con man. He sold many of us a bill of goods. In the finest tradition of the snake-oil salesman, he sold the perfect potion to many of us to cure all that ails us."

By all accounts, Avenatti's speech was well received. Reports indicate that interest in the Wing Ding Dinner event ballooned after he was added to the lineup. People in the crowd, who were well acquainted with the cable-news regular, spoke highly of Avenatti.

“I like politics, so I watch certain channels, CNN most especially,” Jane Sarset of Mason City told The Daily Beast. “From the very first time I saw him, I told my husband if I ever got in trouble and needed a really good attorney, this guy is sharp as a tack.”

Even Republicans seemed inspired by Avenatti.

"I'm a Republican who came here to prove that all of us do not approve of the President," Ed Enright, a self-identified Iowa Republican, told reporters. Enright carried a sign that read: "Mr. Avenatti keep the heat on lying Trump."

"If Avenatti runs I'll help him here in north Iowa and try to make a difference for him," he said.

While Avenatti struck all the right notes when it came to Trump and the unethical White House,  the attorney did take some stances on issues that will not win over every Democrat in 2020.

“I completely disagree with the idea of eliminating [U.S. Immigration and Customs Enforcement],” Avenatti told reporters after the event. “It’s like saying we should eliminate the police force . . . There’s no question we need to change the policies of ICE, we need to address the abuses over the last 18 months.”

The Democratic field will likely be crowded in the run up to the 2020 primaries. More traditional candidates have also made the trip to Iowa or are expected to visit in the coming weeks. Ohio congressman Tim Ryan, one of the progressive leaders in the U.S. House, also spoke at the Wing Ding Dinner event on Friday.

He too urged Democratic voters to elect a fighter.

"I am ready to get into a bit of a fight," Ryan said. "We need to come together and get in a big fight here in America."

Reports on Saturday indicate that Sen. Amy Kloubacher of Minnesota will be a featured speaker at the Polk County State Fry next month. Kloubacher is one of the early favorites to win the Democratic nomination in 2020.