Preserve the Scene of the Tribune/Sinclair Shipwreck; it's Public Treasure at Stake 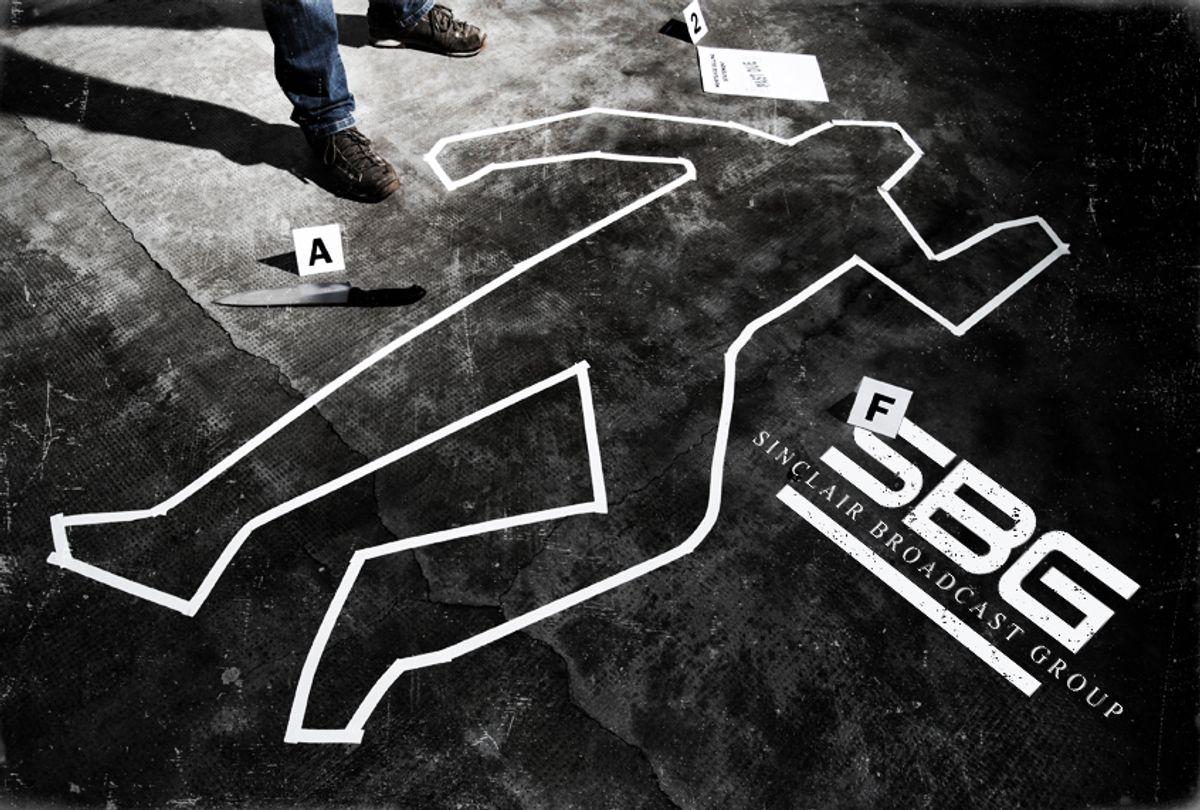 There needs to be some police tape around the wreck of the failed Tribune-Sinclair merger to preserve all the evidence.

Chances are there was some white collar chicanery that went down on this deal that doesn’t involve private property or real estate but the airwaves, which actually belong to the public. These so called ‘media properties,’  that are treated like plastic houses on the Monopoly board, are licensed free of charge to individuals and corporations as a public trust, contingent that they act in the public interest and be of trustworthy character which includes being truthful with the regulator.

In other words, playing three card monte with the Federal Communications Commission is very much frowned on, even if you are a Sinclair Broadcast Group and are best buddies with the current occupant of the White House. And while bully and bluster seems to be in vogue in the beltway, it can be problematic with that pesky alphabet soup of independent agencies like the FCC.

According to the FCC website, “In exchange for obtaining a valuable license to  operate a broadcast station using the public airwaves, each radio and television license is required by law to operate its station in the public interest, convenience and necessity.”
READ MORE: Why are Americans second-class citizens as compared to Europeans when it comes to digital privacy?
In a perfect world, individuals and corporations that don’t meet those standards would have their licenses revoked. It's crazy. Poor people can get arrested for jumping a turnstile but big business fudges the truth and it is just another day at the office.

You would not know any of this from the morning-after coverage in the corporate news media, which mostly reported on the failed deal strictly from the investors dollars and cents worldview and conducted some perfunctory navel gazing about which behemoth media group will sail into the picture and rescue the heavily debt-laden Tribune Media Co.

Buried deep in the flurry of “cover your ass”  legal filings the day after the deal died, Sinclair has been accused by Tribune of not only breaching the contract they had covering the terms of the merger,  but that "it misled regulators” in a bid to hold on to several local TV stations the right wing broadcaster was supposed to sell-off to meet regulatory muster.

According to the Tribune lawsuit Sinclair had committed to its merger partner that it would comply with Department of Justice guidance on how to stay out of antitrust trouble by agreeing to divest itself of some stations in arms-length transactions.

But Tribune alleges “Sinclair fought, threatened, insulted and misled regulators in a misguided and ultimately unsuccessful attempt to retain control over stations it was obligated to sell.”

Specifically, Tribune charges that Sinclair proposed selling  WGN-TV in Chicago to Steven Fader, the owner of a car dealership with close ties to Sinclair Chairman David Smith that “owned the controlling interest in Fader’s car dealership.”

Sinclair committed to selling-off WPIX in New York City to Cunningham Broadcasting Company. But Tribune’s legal filings claim Cunningham was  actually “operated by Sinclair employees, under joint sales and shared service agreements” and “has tens of millions of dollars in debt guaranteed by Sinclair, and has been controlled by the estate of Smith’s late mother until Jan. 2018.”

This Sinclair station shuffle even aroused the suspicions of FCC Chairman Ajit Pai, who himself is the subject of an FCC Inspector General investigation over allegations that even before he was sworn into to his position he had met with Sinclair executives and once in office, laid the regulatory framework for the huge Tribune/Sinclair deal in by loosening the controls on TV station ownership.

That announcement of a loosening of regulations came in 2017 and after that Sinclair  announced the merger deal and pledged to pay Tribune stockholders $43.50 a share.

But more than a year later, Chairman Pai appears to have seen the light and along with the other members of the FCC, rejected the Sinclair/Tribune deal sending it to an administrative law judge.

In its unanimous decision that rejected the deal the regulator held that there were “substantial and material questions of fact” as to whether or not the Fader and Cunningham divestitures were “sham” transactions where “Sinclair was the real party in interest” and had “attempted to skirt the Commission’s broadcast ownership rules.”

In the same business day that Tribune filed its suit seeking a $1 billion in damages from Sinclair, a law firm filed a class action securities fraud case against Sinclair on behalf of stockholder asserting that it violated the Securities Exchange Act of 1934.

“The Complaint alleges that . . . [Sinclair] Defendants made false and/or misleading statements, as well as failed to disclose material adverse facts about the Company's business, operations, and its proposed merger with Tribune Media Company (the "Sinclair/Tribune Merger”),” according to a press release put out by Saxena White P.A., the law firm that filed the case.

The press release continued, “Specifically, Defendants allegedly made false and/or misleading statements and/or failed to disclose that: (i) the Sinclair/Tribune Merger was not in compliance with FCC rules and regulations; (ii) Sinclair was not using its best efforts to eliminate any impediment to regulatory approval; (iii) Sinclair was engaging in non-arm's length transactions with buyers connected to Sinclair's controlling shareholders in order to skirt FCC ownership rules; and (iv) that, as a result of the foregoing, Defendant's public statements were materially false and/or misleading and/or lacked a reasonable basis.”

In a press statement released after Tribune filed suit Chris Ripley, Sinclair’s president and CEO expressed extreme disappointment that the company had spent  “15 months of trying to close the Tribune transaction” and was “instead announcing its termination” despite Sinclair’s belief “the combined company would have benefited the entire broadcast industry and the public . . . increased local news and enhanced programming.”

As as for Tribune’s allegations, “We unequivocally stand by our position that we did not mislead the FCC with respect to the transaction or act in any way other than with complete candor and transparency,” Ripley asserted.

What was a little hard to take is the voice of moral outrage that Tribune’s pleadings were written in about its former best corporate buddy Sinclair.

It reads like Tribune was a college co-ed asked to take a voyage to Nantucket by Boy Scouts, who once it was anchors away, turned into pirates that held the unwitting co-ed hostage.

All Tribune’s board and leadership needed to do was look back to Sinclair’s 2004 efforts to use their market power to sink the campaign of Senator John Kerry or their more recent decision in 2016 to let Donald Trump use their broadcast empire as a  free megaphone.

Surely a $1,500 an hour mergers and acquisitions lawyer worth his or her salt could have done the due diligence and just typed in Sinclair and FCC and gotten a whiff of what they were sailing into.

But the problem with greed is that it can be blinding especially when  you are like Tribune sitting with over $3 billion dollars in debt (baggage) always hoping  for the next ship to come in.