It may not be the trial of the century, but Mueller & Trump, the stake-holders outside the courtroom, are watching 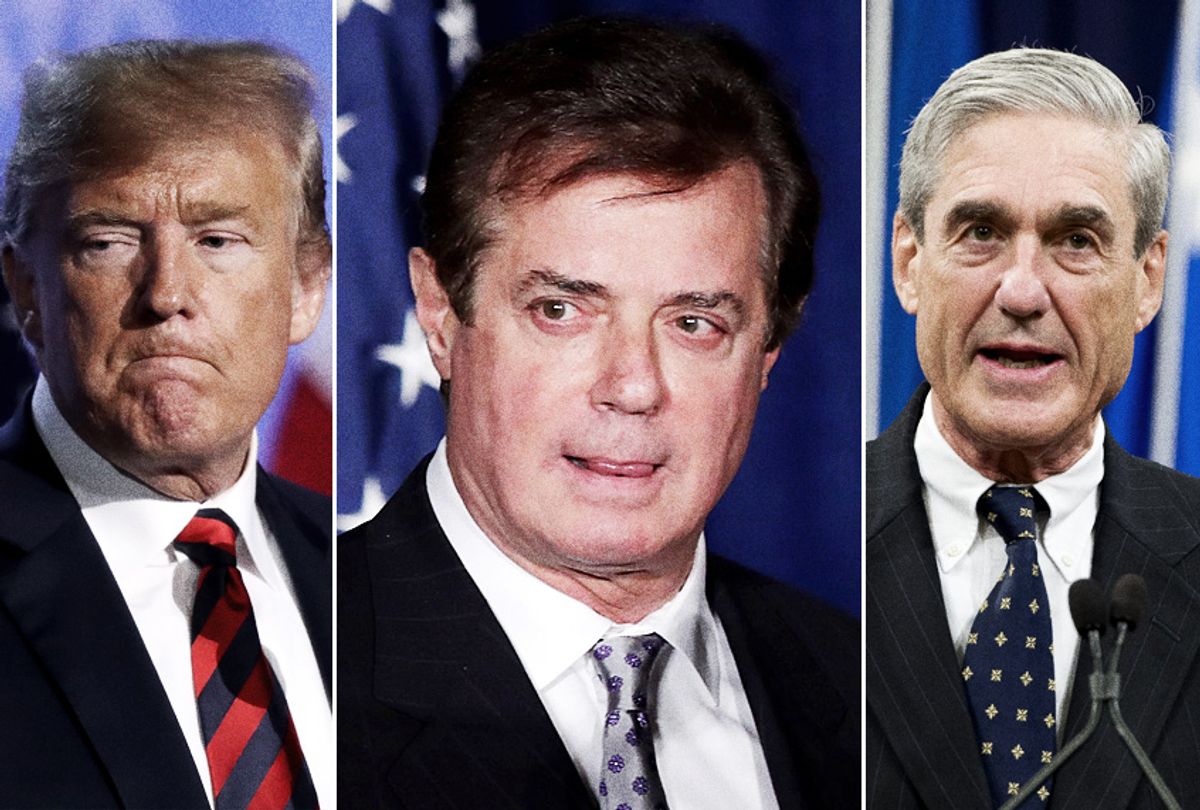 Do you remember the first job you ever had? I’m not talking about cutting lawns, or babysitting the neighbor’s kids, or lifeguarding at the municipal pool. I’m talking about the job you probably got after you graduated from college or finished your military service. A job you had to apply and interview for. A job at a company downtown in an office building. That kind of job.

If your experience was anything like mine, or that of millions of other people’s, an average day at work went something like this.

You arrived at the company and maybe you checked in at a security desk in the lobby, and then you took an elevator upstairs. The elevator was crowded with other people arriving for work. When you got off, there were long hallways with secretarial and assistants’ desks on one side, and doors leading to offices on the others.

Even though the day was just beginning, the place was probably buzzing with activity: computer monitors flickering, people in the halls balancing take-out coffee cups and cell phones as they filed into a conference room for a meeting. Your desk might have been in a large, open area filled with cubicles where other people who had jobs not unlike yours worked. There was a low hum of activity. People were busy, and they stayed that way for most of the day. You probably ate at your desk, and so did many others.

The company you worked for was a great machine that produced something. In my case, it was a newspaper. In yours, it might have been complex financial reports, or data analysis, or a cosmetics product like lipstick, or even somewhere far away from the office, a barrel of oil, or something silky and soft like lingerie or metallic and hard like an exhaust manifold or the hood for a pick-up truck.

But not one of the many companies that Paul Manafort ran when he was working in the Ukraine for its corrupt, mobbed-up pro-Russian president Viktor Yanukovych. Manafort’s deputy, Rick Gates, was asked by Robert Mueller’s prosecutors about Manafort’s companies in Cyprus last week at Manafort’s trial.
READ MORE: Are white people ready to bail on democracy? These researchers say the danger is real
“Did these companies sell a product?” the prosecutor asked Gates.

“Did they have any employees?”

“No,” Gates replied. “The purposes of the companies was to accept payments and to make payments.”

Manafort has been on trial in Alexandria, Virginia this week on charges that he failed to pay taxes on tens of millions of dollars he received for so-called “consulting” work he did for Yanukovych’s Party of Regions, and when that money ran out, he committed bank fraud in order to receive loans against properties he owned in the United States.

Tax accountants and bookkeepers testified for several days about Manafort’s schemes to avoid taxes, and then his long-time partner Rick Gates, who also served as his deputy when Manafort was Trump’s campaign chairman in 2016, took the stand. Gates began by describing how Manafort established companies on the island nation of Cyprus so he could receive payments from other Cypriot companies set up by Ukrainian oligarchs fronting for Yanukovych. The prosecutor from Special Counsel Robert Mueller’s team gave what amounts to a primer for moving money around through offshore shell companies to avoid paying taxes.

Neither the Ukrainian oligarchs or Manafort would sign the documents generated to control these payments. Instead, the documents would be signed by Cypriot nationals serving as fake directors of the fake companies. The prosecutor took Gates through a series of documents showing that payments of one million and three million Euros had been paid to Manafort through these companies.

“At the time, I believe [Manafort] was trying to decrease the amount of taxable income for that particular tax year,” Gates replied.

In other words, Manafort’s companies on the island of Cyprus didn’t exist except on paper, and even on the paper establishing them, Manafort’s name didn’t appear. For American tax purposes, the companies were ghosts. Manafort was a ghost. At least until Robert Mueller came knocking.

In a filing with the federal court in Alexandria before the trial, prosecutors wrote that “The government expects to prove that Manafort earned more than $60 million dollars from his Ukraine work during the period at issue and failed to report a significant percentage of it on his tax returns.”

In the beginning days of the trial, prosecutors produced evidence of where Manafort spent that money. According to CNN, more than $18 million was wire-transferred from Manafort’s bank accounts in Cyprus to the United States to pay for his luxurious lifestyle.

He spent $820,240 on landscaping for his mansion in Bridgehampton, New York.

He spent $1.3 million on home entertainment systems and lighting for a home in Florida.

He spent $5.4 million on a home improvement company in the Hamptons on Long Island.

He spent $3 million on a brownstone in Brooklyn, $1.5 million on a condo in Soho, and $1.9 million on a house in Arlington, Virginia. All the while, Manafort owned a condo in Trump Tower, a home in Florida, and an estate in Bridgehampton near the beach in the Hamptons.

The trial of Paul Manafort in Virginia this week is extraordinary in one way, and very, very ordinary in another.

What’s extraordinary is the way the trial has pulled back the curtain on  offshore tax avoidance schemes and how they work. The trial outlined the establishment of fake shell companies with fake directors to make payments between people who are very real, such as American millionaire Paul Manafort and the Ukrainian oligarchs who paid him. The trial showed how fake companies make fake loans to one another, and how fake invoices for fake work are generated to cover for payments of real money to real people. How these financial maneuverings are carried out is not often revealed in a public forum such as an American courtroom.

What’s ordinary is the fact that it goes on all the time. Two years ago, International Consortium of Investigative Journalists (ICIJ) revealed the so-called “Panama Papers” from the little known but powerful international law firm Mossack Fonseca that has offices in Zurich, Panama City, Hong Kong and more than 35 other cities around the world.

11.5 million records were hacked from the law firm revealing the  offshore holdings of politicians, public officials, and wealthy individuals from all over the world. “The files list nearly 15,600 paper companies that banks set up for clients who want keep their finances under wraps, including thousands created by international giants UBS and HSBC,” according to the report by ICIJ. The report shows “how associates of Russian President Vladimir Putin secretly shuffled as much as $2 billion through banks and shadow companies.”

Sound familiar? According to the Washington Post, yesterday “The judge overseeing the Paul Manafort trial on Thursday granted a request from the special counsel’s office to keep secret a conversation that might shed light on its ongoing investigation into whether the Trump campaign coordinated with Russia. The conversation came on Tuesday, as Rick Gates, Manafort’s business partner who worked on both the Trump campaign and the Trump inaugural, was on the witness stand.”

There were reports all week from the Trump golf resort in Bedminster, New Jersey, about how Trump is “stewing” and “steaming” about the Mueller investigation. South Carolina Senator Lindsey Graham, who played a round of golf with Trump last Sunday, said Trump brought up Mueller and Russia “about 20 times” according to a report in Roll Call.

Special Counsel Robert Mueller has finally brought someone to trial, and that someone is Paul Manafort.  The trial is all about Manafort’s use of offshore shell companies and Cyprus bank accounts to avoid taxes. Essentially, what Manafort did was use his expertise running American political campaigns to help his client Viktor Yanukovych become president of Ukraine. Yanukovych then used the presidency to help his oligarch pals fleece the country of billions, from which Manafort took $60 million.

Kind of makes you wonder if that isn’t what Manafort had in mind when he volunteered to run Trump’s campaign for free in 2016, doesn’t it?

The rest of the country may have not been paying much attention to the intricate financial shenanigans that were being exposed by Mueller’s prosecutors down in Virginia at the trial of former campaign chairman of the 2016 Trump campaign, Paul Manafort.

But you know who was? President Trump.