Manigault-Newman also says she spoke with Robert Mueller in his probe of Russian meddling in the 2016 U.S. election 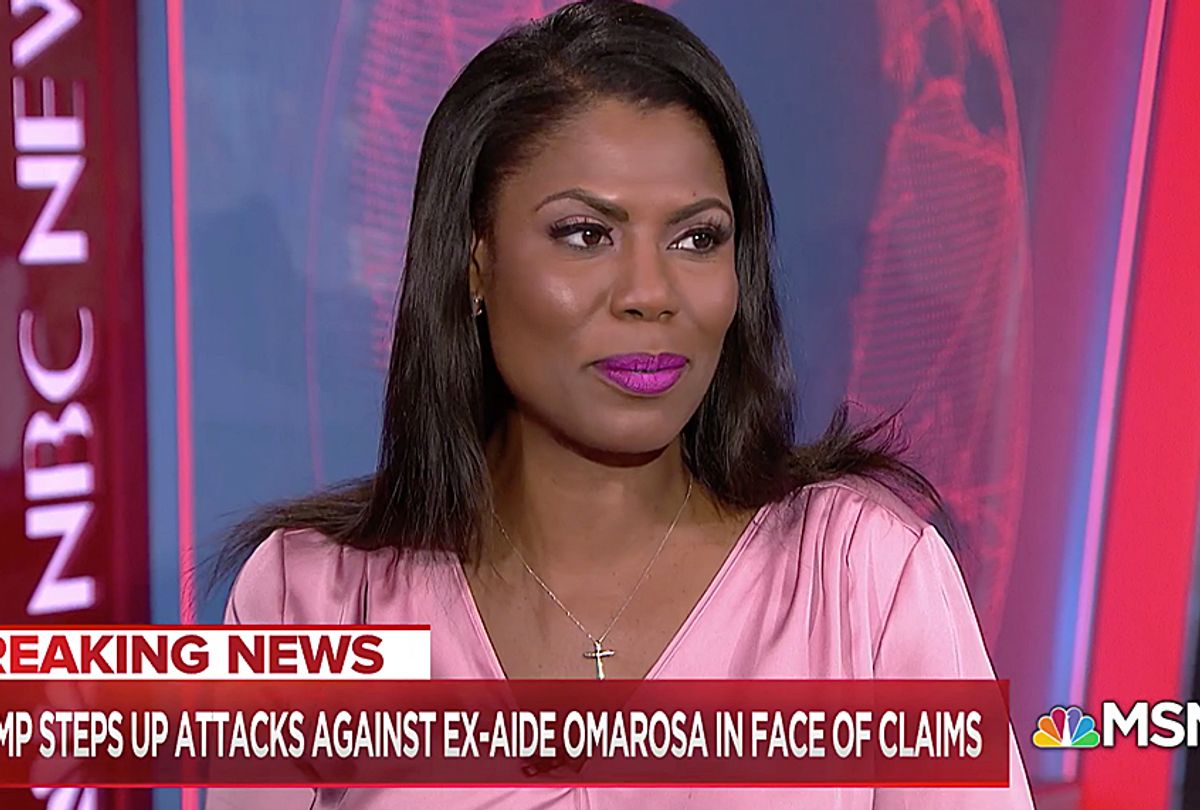 Former "Apprentice" star Omarosa Manigault-Newman claimed during a live interview with MSNBC's Katy Tur that, as a candidate, Republican President Donald Trump was aware that Wikileaks was in possession of hacked emails belonging to Democratic candidate Hillary Clinton's campaign before they were published in the lead up to the 2016 election.

"He knew what was coming out before WikiLeaks released them?" Tur asked Manigault-Newman directly in the exchange.

"You're saying Donald trump had a back channel?" Tur clarified.

"I didn't say that – you did," Manigault-Newman answered. "But I will say that I am going to expose the corruption."

During the wide-ranging interview, the former reality TV personality turned White House staffer also revealed that she had been interviewed by special counsel Robert Mueller in his ongoing probe into alleged collusion between Trump's 2016 presidential campaign and Russia.

Manigault-Newman declined the opportunity to provide additional details of her conversation with Mueller or to confirm whether she had sat down before a grand jury. However, Manigault-Newman pledged her continued cooperation with the special counsel's investigation.

"If he calls me, I certainly will participate with anything that he needs," she told Tur. "I'll provide him with what he needs."

When asked if current White House staffers should be nervous about the open investigation, Manigault-Newman said "they should be very worried" because "they have been hiding things from the American people."

On Monday night, Manigault-Newman claimed to Tur's MSNBC colleague Chris Matthews on "Hardball" that she was in possession of publicly unreleased recordings of the Trump administration, some of which could be of interest to the special counsel's team of investigators. The former "Apprentice" star also declined to provide any clues to Tur about the contents of the alleged tapes.

"I will just say this: There's a lot of corruption that went on both in the campaign and in the White House, and I'm going to blow the whistle on all of it," Manigault-Newman said. "I'm very interested in exposing what was happening behind the scenes."

Earlier Tuesday, Donald Trump's presidential campaign announced they would pursue legal action against Manigault-Newman in New York, claiming she had violated a non-disclosure agreement in a media blitz promoting her new tell-all memoir about her time inside the White House titled "Unhinged."

"Donald J. Trump for President Inc. has filed an arbitration assault against Manigault-Newman with the American Arbitration Association in New York City, for breach of her 2016 confidentiality agreement with the Trump Campaign," a senior administration official wrote in a statement to ABC News. "President Trump is well known for giving people opportunities to advance their careers and lives over the decades, but wrong is wrong, and a direct violation of an agreement must be addressed and the violator must be held accountable."

"It's interesting that he is trying to silence me," Manigault-Newman said of the move to Tur. "So what is he trying to hide? What is he afraid of? If he hadn't said anything that was derogatory or demeaning to African-Americans and women why would he go to this extent to try to shut me down?"

"Should he be afraid of more tapes that you have in your possession?" Tur asked Manigault-Newman during the exchange.

"I think he should be a afraid of being exposed as the misogynist, the bigot and the racist that he is," she responded.

Trump blasted Manigaut-Newman on Twitter Tuesday morning, calling the former West Wing staffer a "dog" after after she released an audio recording of several Trump campaign staffers discussing the fallout should an alleged tape surface in which Manigaut-Newman claims Trump can be heard uttering the "N-word."

When asked about the president's offensive Tuesday morning tweet, Manigault-Newman told Tur, "I think it just shows you that, if he would say that publicly, what else would he say about me privately?"

"He has absolutely no respect for women, for African Americans — as evidenced by him instructing the chief of staff to lock me for two hours in the Situation Room to harass me, to threaten me and say that things could get very ugly for me and that there would be damage to my reputation," Manigault-Newman continued. "He is unfit to be in this office and to serve as the president of the United states."