More attention goes to the dire state of the New York subway, but Garden State commuters have it even worse 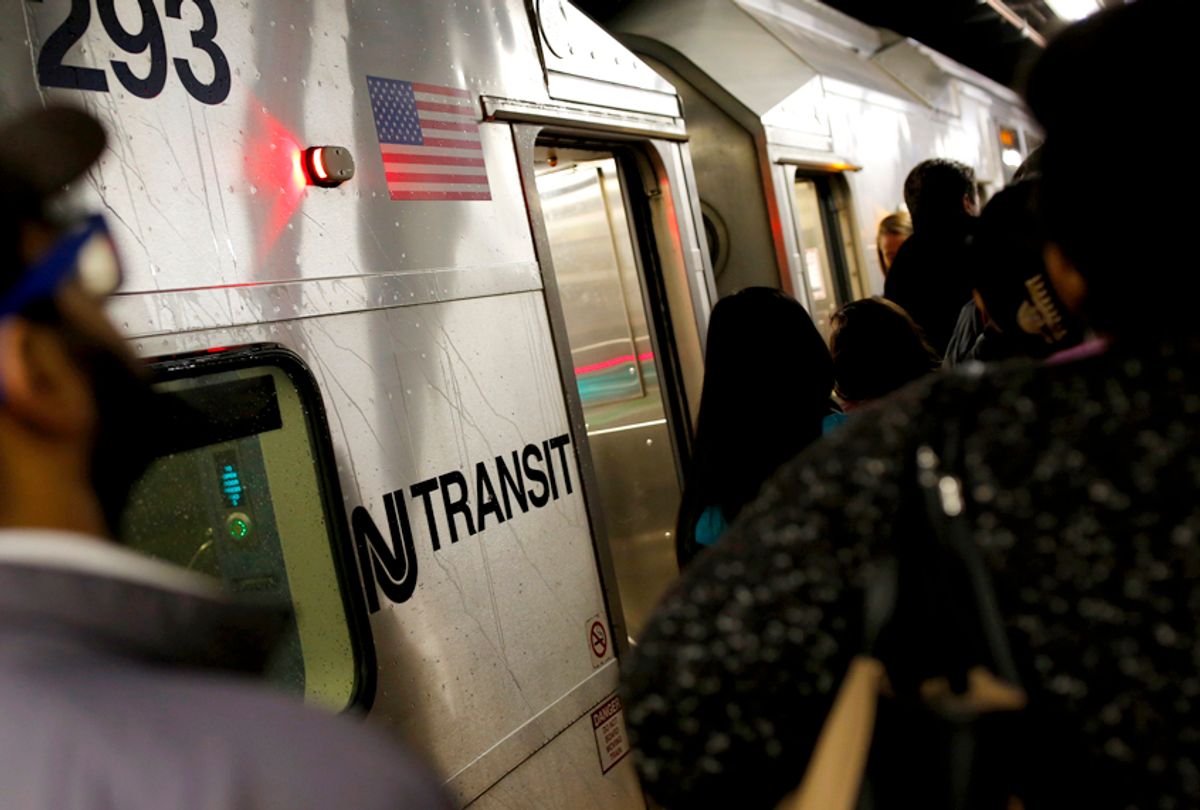 After decades of depending on New Jersey Transit to commute into New York City I finally realized that its current state of disrepair and dysfunction is a reflection of the contempt our elected leaders have for the public in general, and New Jersey Transit’s lost tribe of riders in particular.

And make no mistake: With the random way NJ Transit has been operating this summer it is very much a lost tribe, waiting for trains that never come because they are canceled. We are left for hours at a time on train platforms bombarded by conflicting information coming from robo-announcements and phone apps.

When you look at this miserable lot of humanity at the end of a long hot day, wilted, crumpled and despondent, it's apparent this is a bunch of people with no juice and no clout. There’s not a Dr. Salomon Melgen among them who can garner the kind of full-service catering that the now jailed ophthalmologist got from his favorite Sen. Robert Menendez.

We're just a bunch of nobodies and in New Jersey, it is all about numbers.

At just over 300,000, the daily cohort of rail riders,  if it were a county, would be larger than only eight counties of the state’s 21, hardly a serious voting bloc. And once you take a more granular look at just who actually makes up  New Jersey Transit’s lost tribe, it's easy to understand why the political class has so little use for them. It's a wonder there’s passenger service at all.

They are a suspicious lot. Tens of thousands of members of the lost tribe take the train because they can’t afford to own a car. In a state whose growth has been fueled by upwardly mobile suburban sprawl, it is easy to understand why their limited means are suspect.

What have they been doing with their lives if they don’t own a car? Should we be subsidizing that kind of laziness and lack of ambition? Many of our communities don’t have sidewalks for a reason. We don’t want people walking around our homes who aren’t from our neighborhood.

In the mix of the lost tribe are the low-wage caregivers, security guards, laborers and restaurant staff, mostly people of color. Of course, there’s also a significant number of undocumented immigrants who use the rails to get to work. We know where they rank in Donald Trump's America.

To be sure, there are Wall Street types that rely on the rails but after their Great Heist of 2008 they aren’t particularly popular either. And considering the great investment that houses like Goldman Sachs had in the historic boom and bust cycle that helped hasten the decline of the American railroad, it's probably only karmic justice that they suffer some now.

Besides, their misery is self-inflicted. They can opt for a black car limo or an Uber. They don’t have to be like the thousands of rail riders stuck somewhere between stations in the vast Hackensack Meadowlands, forever stranded like Patrick McGoohan's Number 6, in the BBC cult classic  “The Prisoner.”

I will concede NJ Transit is getting a bit more transparent when it announces the canceled trains by offering a behind-the-scenes glimpse at what causes some of the cancellations.

That engineer line caught my ear on Friday. I wondered if it was about providing an explanation or aimed at recruiting.

The minimum requirements include a high school diploma or a GED equivalent. Some college is desired.“Mechanical, diesel, automotive, electrical experience preferred,” according to a New Jersey Transit information sheet. “Commercial experience as a bus driver, truck driver, subway or train operator, commercial pilot or other heavy equipment experience preferred.”

You must have the ability to “demonstrate self-management capabilities” and have “possession of self-control, trustworthiness, adaptability and conscientiousness while on the job.”

Apparently, the low regard the state has for the  members of  New Jersey Transit’s lost tribe extends to the workforce that operates the railroad that carries it. So the engineers have gone on to greener pastures.

NorthJersey.com reported last summer the NJ Transit engineers earn $32 an hour, while their counterparts at Metro-North make $46 an hour. While the Metropolitan Transportation Authority’s Metro-North has hired close to 100 engineers since the beginning of 2015, NJ Transit had hired only four in the same period of time.

Reportedly, New Jersey Transit has 370 engineers, with dozens slated to retire, leaving it 50 shy of what it needs to run the railroad. It takes 20 months to be trained as an engineer.

“Another cause may be cultural: NJ Transit’s former compliance chief testified to lawmakers in Trenton last month that the railroad retaliates against employees who speak out about problems,” reported NorthJersey.com. “NJ Transit denies those charges and is suing the former official who made them.”

According to the Local 825 pay scale, union operating engineers who move dirt with heavy equipment get $48.07 an hour. It is all about what you value.