Terence Nance's astonishing hybrid defies categorization. And even at its darkest, it shines with originality 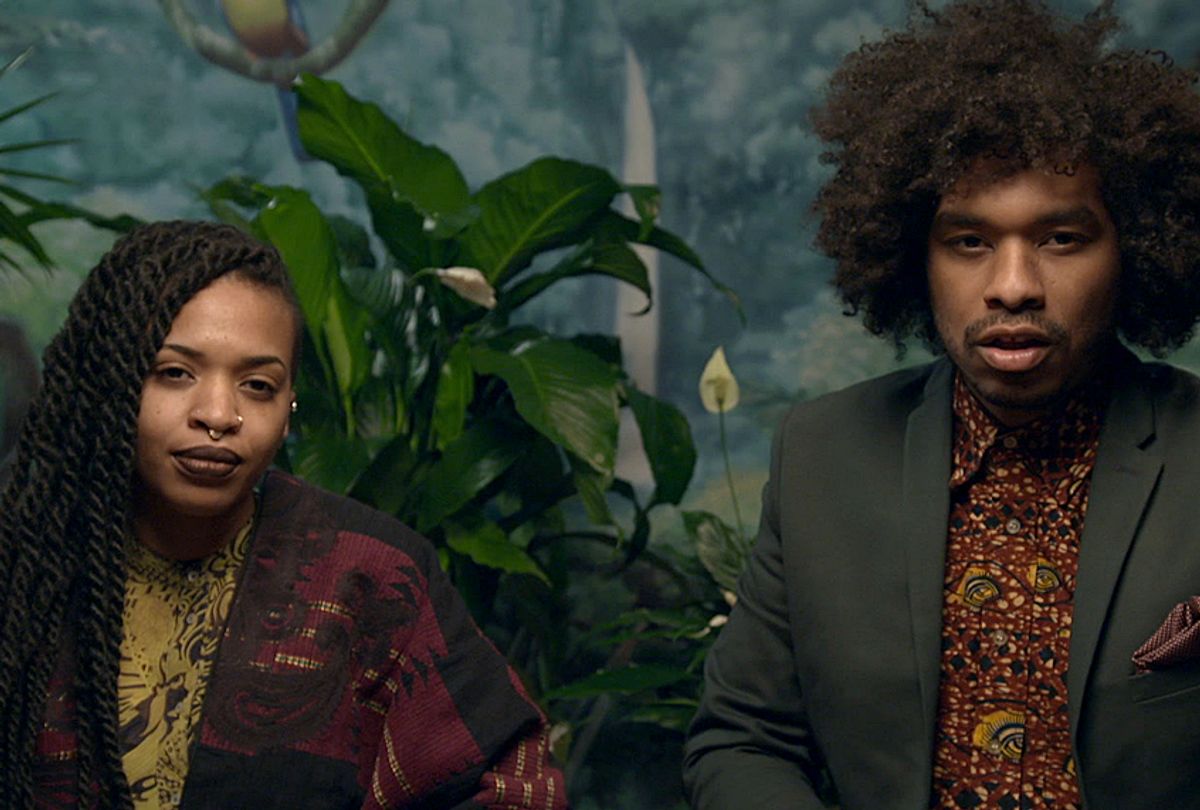 “Random Acts of Flyness,” filmmaker Terence Nance’s weekly experiment disguised as a television series, debuts new episodes every Friday at midnight. Typically this timeslot is where a network chooses to bury projects they’re not sure about, that don’t match with anything else on the schedule. But in this case, midnight is the right fit, for the right reasons. In fact, one might even venture that HBO placed it there out of respect for the artwork.

That may be the best and, possibly, the only way to nudge against some true description of “Random Acts.” It is neither comedy nor drama, nor any hybrid of the two; it’s a half hour collage of image, sound, scripted form and freestyle conversation.

Notice that the title promises acts of “Flyness” — not blackness, though this series is unrepentant in its Afrocentrism, from its hairstyles, fashion, artistic flourishes and casual slinging of terms “bedussy” to the mild-mannered, bleary eyed HBO viewer who may not know what that means.  (In that vein this week’s show will let a whole lot of Middle Americans in on the concept of “hoteps” while asking, slyly, whether the Second Amendment truly applies to black folks.)

And while Nance’s production joins the list of series created and starring African American artists telling stories from a contemporary black perspective — which includes “Atlanta,” “Insecure,” “Love Is,” “The Chi” and “Dear White People” — in no way, shape or form can it be called a standard TV series.

Nance, best known for directing the 2012 Sundance Film Festival darling "An Oversimplification of Her Beauty," employs a similar mixed media approach in "Random Acts," interpreting one unifying theme in a number of ways and drawing upon a breadth of perspectives. Episodes may tell personal stories via interviews, confessionals, freeform poems or choreographed musicals, using moving watercolors or drawings, stop-motion clay animation or men and women on film, whether in stylized black and white or vivid color. There is no fourth wall to be broken since, from the perspectives of its various creators, the audience is immersed in the experience along with the actors, figures and men and women on the street.

One person’s tale may be used speak to broader issues such as toxic masculinity, gender fluidity, rape culture or police brutality. For example, Nance and his directing and writing partners portray the risks black women face when they choose to bring children into the world through the examples of two women marked by history, activist Deborah Johnson among recent clips of Serena Williams, who famously endured complications in giving birth to her daughter in 2017.

Juxtaposing archival footage of Johnson in 1969, who was four weeks away from giving birth when she witnessed her fiancée Fred Hampton shot to death by Chicago Police in an early morning raid, with Williams in her red-carpet glamour, feels intentionally jarring. But the message implied is easily understood: bringing black children into the world is a risk for mother and children from the moment one brings the other into this world.

Black women are three to four times more at risk for a pregnancy-related death than white women, according to the latest statistics from the Centers for Disease Control and Prevention. And this stat holds regardless of economic circumstance or relative safety.

You don’t have to know that hard data to understand its meaning, because preceding this segment is an eerie cable access show called “Everybody Dies,” starring Ripa the Reaper (Broadway actress Tonya Pinkins). Ripa ushers a brief parade of tender-aged black children through a door labeled “DEATH,” singing about all the ways kids from one to 92 might meet their maker — many of them by violent means — to the tune of “Twinkle, Twinkle, Little Star.” She smiles at first, but eventually grows tired; by the end, even Ripa wants to escape this ceaseless tragedy loop.

Then, just as suddenly, we get Jon Hamm playing a spokesperson for an ointment that cures “white thoughts” (i.e. “violence is not the answer” or “but I’m not racist!”).

Even when “Random Thoughts” plummets into dark it retains its color and cheer, punctuating even the rawest political commentary with glimpses of springy bare buttocks, painted fuchsia and bouncing as a waterfall of gold glitter flows down the split, or languid views of writhing mahogany skin dusted with gold.

“Random” is right. But it’s also pointed and thoughtfully structured enough to keep your eyes open, to make sure you absorb everything.

Nance and his artistic collaborators purposely leave the viewer caught between hard reality and creative dream, blending the two so completely at times we’re left guessing whether what we’re seeing is scripted or an act of brutal synchronicity.

This is established from the series’ first moments, featuring Nance casually filming himself while riding his bike down the street, explaining that the show is about, “the beauty and ugliness of contemporary American life.” Almost on cue a cop pulls up beside him, eventually cutting him off and knocking him over with the video still rolling.

Just like that, his lighthearted cold open appears to transform into a police confrontation going, a scene familiar enough to make the observer questions whether this is planned or a handy and terrible coincidence. And Nance keeps us guessing until the last possible moment, when his situation looks bleakest, by suddenly pulling off a feat of magic.

“What you’re about to witness is a hypersigil whose existence will provoke a profound shift in consciousness,” she smoothly explains as she confidently struts down a dark street. Before one pause to figure out what that means, she’s knocked out a would-be street harasser with one look.

And this is how we enter an episode including transgender women speaking to the camera about their experience of being erased, objectified and having expectations foisted upon them, and men catcalling one another — and embracing the attention because, naturally, of course they would.

“It’s not!” he bellows before glaring into the camera and stating, in an extended growl lingering on each vowel for emphasis, “It’s creepy.”

Originally I wanted to explore “Random Acts” as a high-concept televised work of protest art. But this oversimplifies its expansive nature and defiance of definition. To call it such would also imply that Nance’s show stands against something instead of for many subjects, objects and topics.

It is demonstrative conversation, curious query and performance gathered into a single 30-minute pass, stacking up what-if scenarios like bricks and assembling them without irony, as parody or metaphorical trompe l’oeil or simply a pleasure to behold.

If reading all that makes your head spin, good. Now you have a taste of what it’s like to take in this 12 a.m. spark. If you can't say up, don't let that stop you — anytime, anywhere, it's outstanding.

"The Miseducation of Lauryn Hill" turns 20

How the hip-hop artist paved the way for millennial women