How I learned to love the meme: Weaponized irony as the voice a rising generation

For their creators, online memes go well beyond ironic humor. They're an organizing tool and a medium of discourse 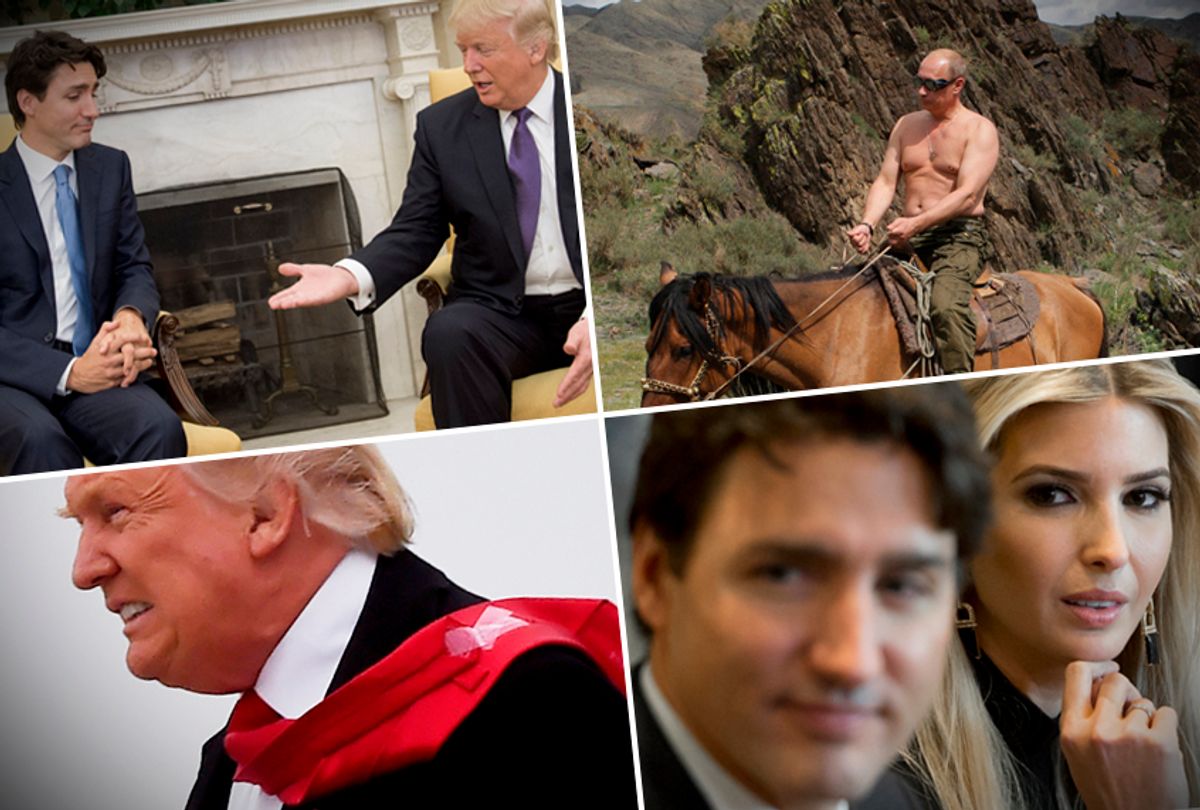 In early 2015, my Facebook feed started to fill with images of Sen. Bernie Sanders gazing into the distance behind a scroll of his own words about the cost of college tuition or the need for veterans' health care or the number of Americans struggling to survive on minimum wage. It made me curious about this senator and why discussion of veterans or retail workers’ economic struggles wasn’t a larger part of the national conversation. Instead, each month I read the Bureau of Labor Statistics’ reports saying the numbers of unemployed Americans was declining. The national conversation seemed to be saying, “Sit back; relax. The recession is over. Everything is fine.”

Because I was unemployed, I didn’t sit back and relax. I wandered further, clicking through the links to Facebook pages like Sassy Socialist Memes and the Bernie Sanders Dank Meme Stash. The images made me laugh, partly because, like an infant, I find repetition funny. Also because they appealed to my Gen X love of irony mixed with a little dread. I was charmed by the babies with Bernie’s hair, or Hillary’s face pasted on a photo of Steve Buscemi (from an episode of "30 Rock") carrying a skateboard and trying to talk to high-school kids, or the side-by-side comparisons of Bernie’s and Hillary’s stance on issues like the best Radiohead album or whether Olive Garden is any good. Why not make jokes about layoffs and the lack of resources for public schools and public health? Not necessarily ironic, but dreadful.

After the white nationalist rally in Charlottesville last year, Tina Rosenberg wrote in the New York Times about the power of humor to counter hate and bigotry. She cited clowns showing up in Oregon and Tennessee to mock white-power marches: “Humor and mockery are also good strategies for classic political protest — whether against politicians who enable white supremacists, or policies like tax cuts for the rich. A good joke creates a memorable, clear message, allowing the protesters to reframe the issue and attract supporters."

But the quickly reproduced images -- of a boyfriend turning away from his girlfriend as an attractive young woman walks by, or a Trojan horse being led across a drawbridge and into a fortress, or a kid in his driveway blowing a horn while a girl covers her ears and runs away -- can critique a politician or racist ideology in few words. The pictures do most of the work. Text over the horse or the angry girlfriend does the rest.

However, meme creators and the millions who share them aren’t always laughing. Despite what a recent essay in Salon argued about millennials' absurdist response to late-stage capitalism, in the form of memes and (mostly fictional) dares, many young adults find hope.

My son Henry, who has inadvertently led me to most of the socialist meme pages I’ve visited, put me in touch with two of his friends who create memes, and who have been fluent in this mode of communication since well before those Bernie memes showed up in my life. Both are former students with Henry at Shimer College, a great-books school once dubbed the worst in America due to the way a small student population skews standardized metrics, which means they discuss discourse and I can understand about a third of what they say. Both say their interaction with memes have contributed to a leftward shift in their politics.

“I definitely left my libertarian roots after becoming aware of the insidious nature of the alt-right after gamergate and Trump's campaign,” Cordell Longstreeth told me via email.

“Getting into leftist memes over the last two years has certainly been a major influence on my politics,” said Mark Cunningham, also by email. “With memes and the communities that surround them, I have been connected to a much larger conversation with my politics for the first time.”

Cunningham also said they (the pronoun Cunningham prefers) had witnessed a similar shift in their younger brother Andrew, who is now 16. “I had been trying to lecture him about leftism since I was in middle school, but very understandably it didn't really leave an impression,” Cunningham said. Memes made the impression.

While alt-right meme creators are generally credited with the proliferation of political memes, young socialists and other radicals have created their own huge subculture. A January 2017 profile of Facebook’s left meme culture, or Weird Facebook, in Seattle Weekly claimed that “as a collective, these pages reach somewhere in the tens of millions.” Sharing is a crucial means of production. Page administrators share one another’s creations. Sometimes the images spread so far they show up in my feed shared by friends and family my age or older.

“Memes are providing a medium for civil discourse in a manner that Town Halls only wish they could,” Longstreeth said.

On the r/Socialism subreddit, a recurring theme of discussion is the pros and cons of memes as a means of propaganda. In a thread under the posting “As sad as it is, memes have become part of the political battle nowadays,” users debate whether funny memes will add to the public’s oversimplification of socialism. Meme creators in reddit discussions encourage others to build pages on social media like Instagram or Facebook. The alt-right flourished by sharing memes. The left needs to combat the hate and fake news with their own memes, redditors say.

“Memes are pretty structurally anti-author and are often anonymous, which places less emphasis on holding up any individual associated with making a given meme," said Cunningham. "They’re instead understood through the context and community that they came out of. It makes sense that a DIY and decentralized medium has a DIY and decentralized economy and government as a popular topic.”

The kids are speaking my language. I spent my 20s reading cut-and-pasted zines that looked at the ruling establishment, from the music industry to the patriarchy, with dark irony. I job-hunted and rode the subway up and down Manhattan to a series of jobs with "assistant" in the title, during and after the recession of 1990. From my seat on the subway it looked like all the good jobs went to kids graduating from the same few schools. Zines offered a way to talk about or laugh about our lives outside of the establishment media. Some of the publications born in that era, like The Baffler and Lumpen, still question the status quo today.

Even as meme creators make others laugh, the content and the hours spent engaging over politics and social justice are emotionally taxing. Sometimes in my late-night wandering around Weird Facebook, I come across a post from an administrator saying that the page would go quiet for a mental-health break.

Cunningham wasn’t surprised. “I think there is also a link that makes sense between progressive leftist politics, depression and memes. A lot of kids get into radical politics because they're LGBTQ or because they're people of color, and being marginalized in society can easily contribute to being depressed."

You don’t have to venture to alternative social media to know that rates of depression and suicide have been on the rise for decades. It’s literally front-page news. My own children have struggled. They take refuge in pages like Wholesome Memes or I Told My Therapist About You, which offer images of dogs, hedgehogs or Spongebob with uplifting text, or viral Tweets that validate someone who might be feeling anxious or isolated because their depression is momentarily unbearable.

Cunningham said it helps to talk and joke online about mental health. “It's nice to be able to be honest with people about how I'm doing, comfortably, and to know that I'm not being judged because they feel the same way. Probably half if not more of the text conversations I have over the phone involve sending depression and lefty memes back and forth to friends that I don't get to see very often, as a way of checking in and keeping in contact.”

As I wrote this essay, my daughter Stella created her first meme. She used an often reproduced image of conservative commentator Steven Crowder at a table with a sign that originally said “Male privilege is a myth. Change my mind.” The sign has been altered to customize his change-my-mind statement. Stella created a feminist message advocating for openness around menstruation. In true meme form, the text is not for the squeamish.

I’ve embraced this new way of communicating. When Stella sees that I’m stressed, she sends a funny meme. Henry sends political memes he thinks I’ll appreciate, or, recently, a link to the Facebook page “I Shitpost in r/Chapotraphouse, Join the DSA and Own the Libs Online” -- something I originally thought he'd made up to make fun of me. Sometimes over dinner, conversation turns to memes.

If people my age say we want a revolution -- in the form of Medicare for All, a livable wage for people in retail or service work and policies to protect the environment -- we may need to embrace the language of our future leaders.