The people on Trump’s list aren’t enemies, they are witnesses

The secrets they have aren’t secrets anymore. They’re evidence 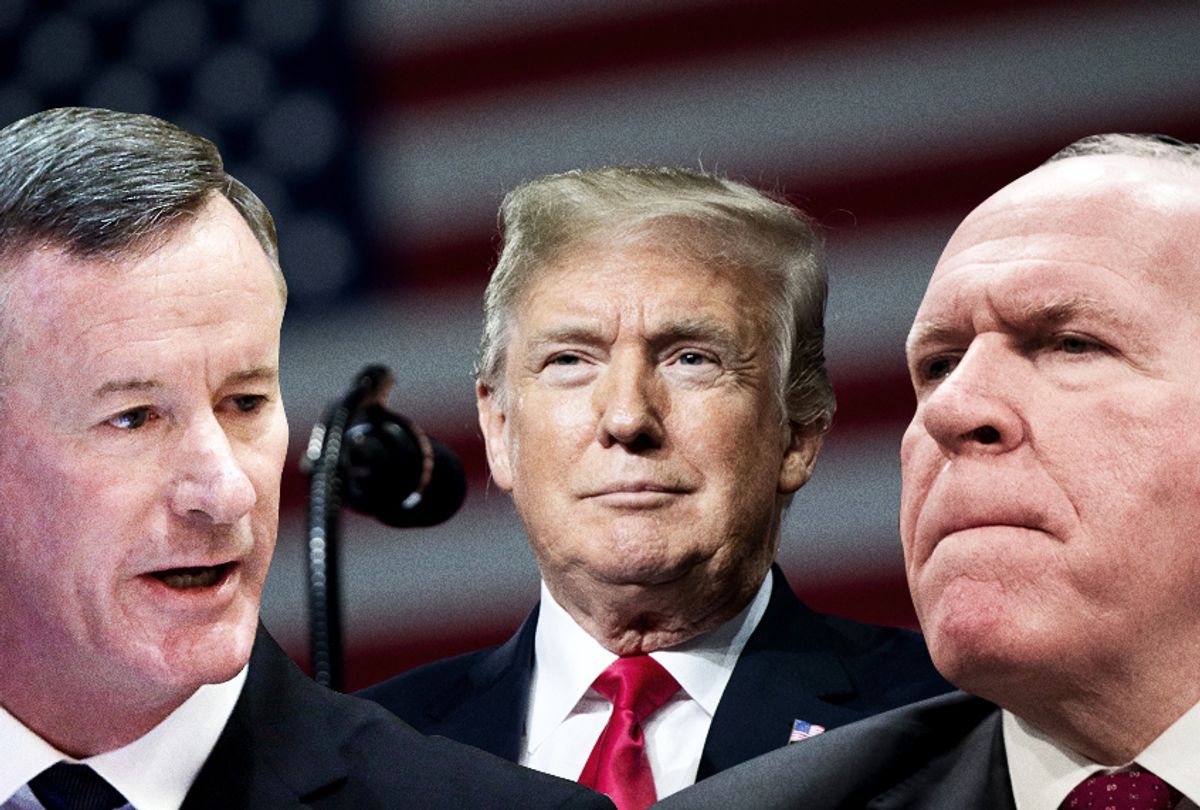 James Clapper – 32 years in the Air Force, retired as a three-star general with three Legions of Merit, two Bronze Stars, and two Air Medals. Flew 73 combat support missions over Vietnam, Laos and Cambodia. Director of the Defense Intelligence Agency, 1991-1995. Under Secretary of Defense for Intelligence, 2007-2010. Director of National Intelligence, 2010-2017.

You want to know what these people have in common? With the sole exception of Bruce Ohr, they’ve all be questioned by either the House or Senate Intelligence committees, and most of them have testified before the grand jury in Washington D.C. empaneled by Special Counsel Robert Mueller. In other words, they are all witnesses in the investigation of the Trump campaign’s contacts with elements of the Russian government during and after the election of 2016.

What Trump is doing by yanking their security clearances or threatening to do so isn’t punishing them. He’s cutting them loose, and it’s going to backfire on him.

Rachel Maddow did a brilliant job on her show on Thursday night showing several of those on Trump’s enemies list testifying before the Senate Intelligence Committee in May of 2017. She was making another point, that pulling their security clearances will end the ability of any of Trump’s enemies to consult their personal papers and notes from their time in government service when preparing to give testimony before either congress or Mueller’s grand jury because their notes and papers contain secrets.

But the tape of those hearings also showed something else. It showed that the “secrets” Brennan, and Comey, and Yates and Clapper and the rest of them learned were actually knowledge of crimes that were committed by the Trump campaign. They were secrets only because of their official positions and security clearances. But the knowledge they had was real.
READ MORE: Exclusive: Trump-endorsed radio show has promoted ex-CIA agent's call for right-wing rebellion
For example, at the hearing on May 23 of last year, James Comey was asked by one of the senators, “Do you believe Donald Trump colluded with Russia?”

“I don’t believe I can answer that question in an open setting,” Comey answered. His answer clearly indicated that he had classified information about collusion between Trump and the Russians, because if he didn’t, he would have simply answered, “no.”

Sally Yates was asked, “Do you have any evidence that anyone in the Trump campaign colluded with the Russian government or intelligence services in an improper fashion?”

“My answer would require me to reveal classified information, Senator,” Yates replied. Her answer indicated the same thing, that she had such information, but it was classified. If she didn’t have any information, she would have answered, “no.”

Comey was asked, “Was the FBI able to confirm any criminal allegations contained in the Steele document?”

“That’s not a question I can answer in an open setting,” Comey answered, indicating that the FBI indeed had confirmed such allegations and had done so using classified information, or he would have answered, “no.”

Comey was asked a question about why Jeff Sessions had recused himself from the Russia investigation: “What was it about the Attorney General’s actions with the Russians” that led to Sessions’ recusal?

“We were aware of facts I can’t discuss in an open setting that would make his continued engagement in a Russia investigation problematic,” Comey answered, obviously referring to classified information damaging to Sessions.

Sally Yates and James Clapper were both asked a long, complicated question about whether they knew of British and other intelligence agencies sharing intelligence in 2015 and 2016 with American intelligence officials about contacts between the Trump campaign and Russians.

Yates simply replied, “I can’t answer that,” indicating her knowledge of these contacts was classified. Clapper said, “Yes, and it’s also quite sensitive,” indicating the same thing. Both were admitting that they knew of the intelligence sharing, or they would have answered, “no.”

John Brennan was asked if he knew of any Trump campaign officials making false statements about contacts with Russians, or who failed to disclose those contacts to United States officials.

“I think that’s something we can pursue in closed session,” Brennan answered, indicating that he had knowledge of the Trump campaign having contacts with Russians, but it was classified.

Here is why going back over this old testimony by these former American intelligence and justice officials is important.

They were testifying before the Senate Intelligence Committee on May 23, 2017. The FBI had opened its investigation into the Trump campaign’s contacts with Russians in July of 2016 while Comey was FBI Director. By May of 2017, he had knowledge of Flynn’s contacts with Russian Ambassador Sergey Kislyak, the Trump Tower meeting between Paul Manafort, Donald Trump Jr. and Jared Kushner and four Russians, and the contacts between Trump campaign adviser George Papadopoulos and Russians and Russian spies in Rome and London. Papadopoulos was questioned by the FBI on January 27, 2017. None of this was known to you or me, but it was known to Comey, and probably to Brennan, Clapper and Yates. We wouldn’t even hear the name “Papadopoulos” until he was arraigned and pled guilty on October 5, 2017.

But what Trump’s enemies knew in May of last year isn’t secret any longer. Mueller has already indicted or secured guilty please from 32 people and three Russian companies. He indicted 25 Russian citizens for breaking our election laws and conspiring to defraud the United States. He’s got multiple American citizens cooperating with his investigation into the contacts between the Trump campaign and Russian officials.

The secrets that the people on Trump’s enemies list were keeping as they testified before the Senate Intelligence Committees were secrets about crimes being committed during and after the 2016 election, and they’re not secrets anymore.

Their security clearances are being yanked or threatened for the petty, venal reason that they’ve been critical of Donald Trump, and he wants to retaliate against them.

Trump is making a very big mistake. By creating his enemies list, he’s confirming what they know is accurate, because their knowledge is a threat to him. By lashing out, he’s unleashing them. What motivates any person on Trump’s enemies list to keep secrets that aren’t secret anymore?

If I were Brennan, Clapper, Comey, Hayden, Yates, Rice, McCabe, Strzok, Page, and Ohr, I’d get together in Washington D.C. and compare notes and hold a press conference and tell the world everything they know. Because what they know about are crimes, and having knowledge of crimes isn’t a secret, it’s evidence.

That’s why Trump’s enemies list will backfire on him. He’s not shutting them up. He’s cutting them loose, and what they know is going to put people in jail and possibly drive him from office.