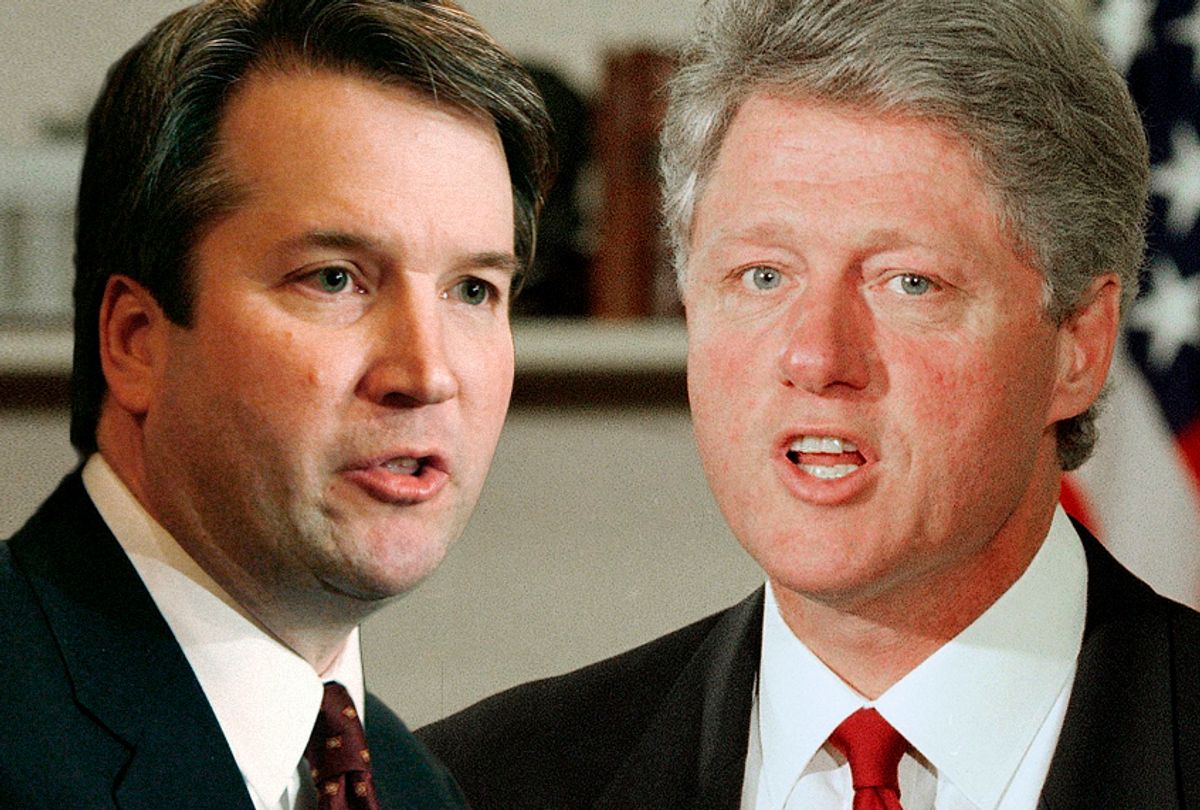 For both the media and the Democrats, gathering sufficient information about Brett Kavanaugh, Donald Trump's latest Supreme Court nominee, before Senate Majority Leader Mitch McConnell crams him through the confirmation process has seemed nearly impossible. On Monday, however, The Washington Post managed to publish the full text of a much-discussed memo Kavanaugh wrote in 1998. At the time, Kavanaugh was part of special prosecutor Ken Starr's team, working on an open-ended investigation of President Bill Clinton that started with a right-wing conspiracy theory about real estate deals and wound up, years later, being about a sexual relationship Clinton had with White House intern Monica Lewinsky.

The full text of this memo is telling for a couple of reasons. First of all, it's a picture-perfect distillation of the way that disgust and titillation are completely intertwined in the conservative mind and lay the groundwork for the right's sadistic approach to sexual matters. The other is that it offers yet more evidence that Kavanaugh is far from the fair-minded jurist Republicans are portraying and instead clearly seems to be a partisan hack of the worst sort. On that latter point, there is very ample reason to believe that Kavanaugh will allow Trump to get away with all sorts of grotesque efforts to escape consequences for any illegal dealings with Russian agents.

It's already been reported that Kavanaugh had pushed hard, during his time in the Starr investigation, to ask Clinton a bunch of explicit and repetitious questions about the sexual details of his relationship with Lewinsky. What this memo makes clear is that Kavanaugh's interest in granular detail was more "Penthouse Forum" than "deposition." And his reasoning is made clear when Kavanaugh writes that the goal is to pressure Clinton into resigning or admitting to perjury. The idea was clearly to make the questions so uncomfortable that Clinton would capitulate.

But whatever legal strategy Kavanaugh is advocating, it's hard to look away from how perfectly this memo captures the rat's nest of prurience and puritanical moralism that motivates the religious right — the same movement that hopes to use Kavanaugh to undo decades of legal rulings granting women and LGBT people sexual privacy and autonomy. On one hand, he decries Clinton for "disgusting behavior" that he says "disgraced his Office." On the other hand, he wants to know every single detail, rendered in maximally graphic terms.

Conservatives have long tried to leverage legitimate feminist concerns about power imbalances in relationships like the one between Clinton and Lewinsky in order to paint conservative interest in this case as high-minded instead of leering. We see Kavanaugh playing the same game in this memo, blaming Clinton for turning Lewinsky's life "into a shambles," while avoiding the fact that Starr and his investigative team worked with right-wing operatives to out Lewinsky and parade her around for months in the public square. In this memo, it's clear that Kavanaugh's plan was to draw out Lewinsky's public humiliation even further by rooting around for more explicit details.

Kavanaugh later tried to distance himself from this abusive attitude towards Lewinsky, saying, "I regret that the House of Representatives did not handle the report in a way that would have kept sensitive details in the report from public disclosure." But in the heat of the moment, Kavanaugh was a big advocate of using sexually explicit details as a tool of public humiliation for partisan gain and didn't care how much it might damage the woman involved.

What's equally telling is how full-throated Kavanaugh was in his belief that the president deserved no special protections from legal inquiry or consequences, even though Kavanaugh's anger, as captured in this memo, is largely about a legal sexual relationship and not about the president committing perjury in an attempt to conceal it. Kavanaugh denounces Clinton for "frivolous privilege claims" and says he is "strongly opposed to giving the President any 'break' in the questioning."

Kavanaugh's strong objections to the idea of executive privilege dried up the second the topic was something other than exposing the frequency of Oval Office ejaculations. As soon as 1999, Kavanaugh had switched to arguing that a court decision to release the Watergate tapes was "an erroneous decision" because it "took away the power of the president to control information in the executive branch."

He took that position even though the central scandal of the Watergate controversy — a burglary and the resulting cover-up — involved criminal activity. Which was not true of Clinton's affair with Lewinsky, however unethical or distasteful one may find it.

Kavanaugh's view that executive privilege is nearly ironclad -- unless there was oral sex involved -- was strengthened after his time working for George W. Bush, who probably didn't commit adultery while in office but did get the United States into an unnecessary war based on blatantly false claims and was accused of outing a CIA agent in order to punish her husband for saying so. After all that, Kavanaugh bafflingly concluded in 2009 that "the president [should] be able to focus on his never-ending tasks with as few distractions as possible" and so "should be excused from some of the burdens of ordinary citizenship" such as dealing with subpoenas and other legal issues.

Kavanaugh and his allies would like to portray this history as an evolution in thought. The likelier explanation, especially based on the timing, is that Kavanaugh's views on executive privilege depend not on the severity of the legal morass any president is involved in — lying about an affair being far less important than lying to launch a war or cover up a political burglary — but on whether that president happens to be a Republican.

McConnell clearly wants to get Kavanaugh's butt into a seat on the Supreme Court before it begins reviewing the inevitable arguments over how much President Trump's executive privilege should shield him. Such cases might involve answering a subpoena by Robert Mueller, the consequences of campaign finance violations, foreign emoluments or even a conspiracy to defraud the United States by working with Russian intelligence to hack Democratic email accounts during the 2016 presidential campaign.