Eighth grade can be hell. Back then I thought I'd be alone until one brave, outgoing girl decided to be my friend 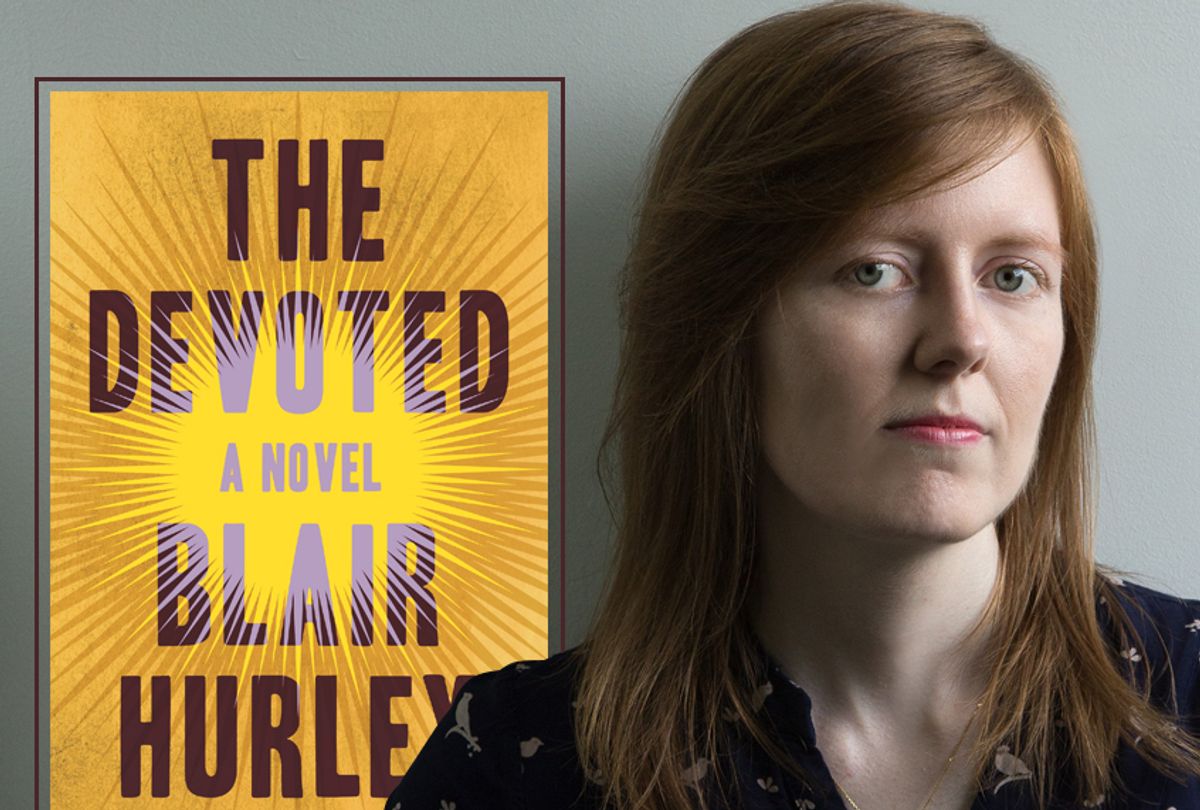 Eighth grade can be hell in so many ways, for so many lonely kids. In my version, I’m the kid who keeps a book open beside my tray at lunch, who hides in corners of the halls, who tucks herself into the front seat of the bus on the ride home so I can chat with the kindly bus driver. I’ve been bullied for two years by two tough girls who demand to know why I’m reading all the time. They call me nerd, loser, weirdo. They stuff garbage in my school mailbox, they write “BLAIR IS STRANGE” dozens of times on the class homeroom blackboard so that everyone will see. I erase all the writing quickly, humiliated and alive with threat — I’m shocked someone noticed me, that I could attract so much contempt. My sixth grade best friend outgrew me and can be seen walking down hallways among packs of girls with long blond ponytails laughing aggressively, never looking my way. I am friendless. I spend hours contemplating the lonely and bereft characters of literature, the Jane Eyres and the Harriet the Spys, the people who were alone in the world and got by somehow. This will be my life, I decide. My brave and solitary path, decided by age 13.

But another girl spots me, I’ll never quite know why, and pulls me out. She’s another nerd like me, an outcast but someone who’s good at hiding it with a brave, brassy voice and a high fluttering laugh, a willingness to dance in public, to wear odd mismatched clothing, to make dresses out of duct tape. She tells me she wants me to come to tech club. It’s just us two and one other girl for a while, learning to code and make our own websites, and after a while she says, you should come to Yiddish Club too. I’m not Jewish; I come from a long line of Boston Irish Catholics, and I don’t know a word of Yiddish. I don’t know what kugel or hamentashen are or the difference between a temple and a synagogue. But this girl is my friend, I’m tentatively realizing, and she has a way of overpowering my reservations, insisting that she knows what I need.

I bring my salami sandwich on a tray to the science room and a group of high-achieving suburban girls fill the room with talk. They’re a little freer in this weekly lunch period than when I see them in class or in the halls, hunched over homework. They can talk about what it’s like to be Jewish here. Our determinedly secular school does not encourage talk about religion; we’re not allowed to form clubs with religious affiliations. But there’s French club and Latin club; why not Yiddish?

Our librarian reads us Yiddish with Dick and Jane. “Bob is a real mensch,” she reads. “Jane must schlep the Open House signs to the car. See Jane schlep. Schlep, Jane, schlep. Some people come to the Open Houses just to nosh. Nosh, schnorrers, nosh.”

I’m quiet for the first few meetings. I listen as the girls discuss issues in the Jewish community at the school and in the larger world. We watch a documentary, "Trembling Before G-d," about homosexuality in the Orthodox community. We discuss the Talmud and the interpretation of law and what the intersection of religion and race and identity really means. We discuss what it means to honor Shabbat and why some Jewish people honor the laws in different ways. Can you drive a car to the hospital on Shabbat? Yes, if it’s an emergency. Can you turn the lights on or ask someone else to do it for you? Can you eat meat and dairy in the same meal as long as it’s never on the same plate? And can you be a good Jew if you do none of these things?

It’s the first time I’ve heard a serious discussion of belief and law and tradition, of faith as calling, as ethnic identity. Religion is mostly absent from my home and my upbringing, and I’m fascinated. The girls bring up moments when they felt alone, when they wished they could learn more about who they are. How the only Jewish history we learn is the Holocaust. We debate the good and bad of "Schindler’s List." We debate whether "Fiddler on the Roof" is feminist. There’s a lot to laugh about too, a shared language, a private joke that everyone’s in on. My friend writes Hebrew letters carefully on a chalkboard, teaching me simple greetings and prayers. She sends me to a grocery store to buy matzoh for Passover. She’s at the center of every conversation, in her element in the club, not shy or too strange or an outcast here. We go to movies on Fridays after school, making fun of rom-coms, though sometimes she has to duck out of the theatre early to make it to her family’s Shabbat dinners. There’s a mysterious part of her life, a weekly engagement with the sacred, that I envy.

In the club’s casual weekly meetings I realize that I am deeply curious, that I want to belong. I want to know how faith feeds people and makes them feel a sense of belonging in the world. Is faith a form of love? A part of the self? A connection to something larger?

Yiddish Club becomes one of my most dependable activities. It’s my one spot of strangeness in my week, the place where I’m always an outsider, always learning. Three years in a row I play an outraged townsperson in our Purim Spiel, a play reenacting the story of brave Esther who refuses to give up her religious beliefs and bow before the king. Our male Spanish teacher dresses in exuberant drag as Queen Vashti, our librarian is the forthright Esther, my friends are Mordecai and the villainous Haman. We perform for the entire school. Each year Esther declares that as a righteous Jewish woman, she cannot bow to any king because she serves a higher lord. By the ninth and tenth grade my bullies have retreated and I’ve made other friends: There are other writers and artists out there, happy to talk about books with me. I know these other friends wonder what I’m doing up there on stage, how I could possibly belong. I can’t fully explain it either; I’m always a little embarrassed by my membership, not sure why I’m there. Yet I keep coming.

We celebrate Hanukkah with latkes and applesauce and desserts I don’t know the name of, trading chocolate coins and spinning dreidels. My friend pulls me into a ring of people dancing the horah. At first I hang back, shy as always, but she grabs my hand. “Come on, Honorary Jew,” she says. We spin faster and faster, laughing, the blur of us going by, the circle complete with me in it.

Later, my friend will choose to embrace her Judaism more seriously, becoming Orthodox, marrying an Orthodox-observant man and keeping a strictly kosher home. When we meet, there’s an uneasiness between us; I’m anxious not to offend, but she can’t eat in my home, and when I eat at hers I nervously break rules, speaking when I’m supposed to be silent during the mealtime prayer. I’m struggling to understand how this life choice can be reconciled with the feminist ideals I know we both hold. She’s studying to be a doctor and learning how to wrap her hair so that it is covered completely, at the same time. There are these pieces of our lives that refuse to fit together, and yet we try to make them fit anyway, or we live with the contradictions.

I look around the room at the signed ketubah, the marriage contract, on the wall, the paper plates and the challah bread that we all share. Whenever we meet, I’m reminded again of how much she’s given me, and now there’s no way I can give back. She can’t attend my wedding because it’s on a Saturday. I wonder at the divergent path we’ve been walking. How her faith was once a bridge to friendship, and now it feels like a door, closing politely but firmly in my face. But we both know there will always be something between us, a connection between shy girls who needed a friend, badly, at such a delicate time in their lives.

I think of the requirement for converts to knock on the door of a rabbi three times, to show their commitment. Faith can take the form of dogged persistence. It can be an adherence to a law to prove your devotion. It can take the form of a friend insisting that you have worth, you belong, when you’re not so sure. It can look a lot like love. And every time I knock hopefully, my friend continues to open the door.

What can faith do for us? I still wish I could feel the belonging that seems to give people like my friend such a calm sense of purpose. Knowing the dance moves of life, knowing the right rituals for a birth or a funeral or just the simple joy of sharing a meal with people you love. There’s a word and a prayer for everything in her world, the right story to tell for this day and that day and the next. I’m stuck trying to write my own. At the dinner table, my friend opens a prayer book. She’s smiling and serious at once, glad to have me as always, to share this part of her life. I listen as she opens her mouth and begins to sing.

Blair Hurley is the author of "The Devoted," a novel out now from W.W. Norton. Hurley has had work published in West Branch and Mid-American Review. A Boston native and the winner of the Pushcart Prize, she received her bachelor of arts from Princeton University and a master of fine arts from New York University. She currently resides in Toronto, where she teaches creative writing at the University of Toronto.