President Donald Trump's worst day yet: Manafort, Cohen fall and the walls are closing in

Trump seems subdued after his longtime lawyer implicates him in a crime. But does this shift Republican attitudes? 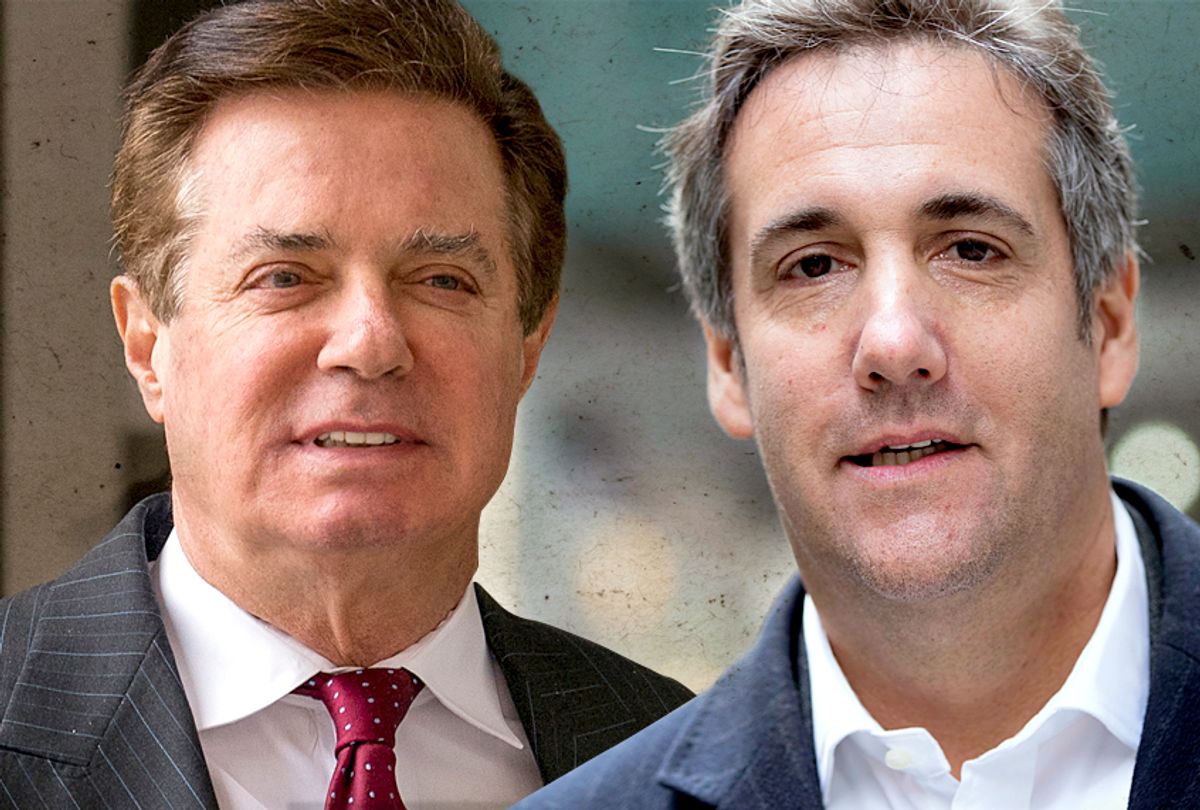 Ever since Donald Trump glided down that golden escalator three years ago it has seemed as though each news cycle is more surreal than the last one. But every once in a while something happens that breaks through the dizzying cascade of crazy tweets, palace intrigue and incoherent, destructive policies. Yesterday was one of those times. Two separate, serious legal proceedings unfolded over the course of several hours, leaving the weirdly unfamiliar impression that something real and recognizable had happened.

In his allocution -- his formal statement to the court -- Cohen said that in addition to his own criminal tax evasion, bank fraud and campaign finance violations, his former employer, Donald Trump, had illegally directed him to pay hush money to adult film actress Stormy Daniels and former Playboy model Karen McDougal to keep them quiet in the weeks before the 2016 election. (I should note that Trump is referred to as "Individual-1" in the document, but it's clear that it's him. As the court document states, "in or about January 2017, Cohen left the Company and began holding himself out as the "personal attorney" to Individual-1, who at that point had become the president of the United States.")

The plea deal indicates that the prosecutors had plenty of corroborating evidence, including audiotapes, to use against Cohen if he had gone to trial. It doesn't specify whether or not this corroborating evidence applies specifically to the president, but one can assume there is something there. We've already heard Trump and Cohen on tape, in close proximity to the election, talking about how to funnel hush money. It's fair to conclude prosecutors did not simply take Cohen's word for it.

It's also clear now that the publisher of the National Enquirer did not pay McDougal off simply as an act of friendship toward Donald Trump, buying her story and then not running it (a so-called "catch and kill"). It was always a transactional arrangement whereby Trump would simply pass the money to McDougal through the tabloid. It was even more unscrupulous than we knew.

It's unclear why Cohen didn't sign a cooperation agreement. According to Vanity Fair, this plea deal came together very quickly. One could speculate that since Cohen's lawyer, Guy Petrillo, used to be in charge of the criminal division in the U.S. attorney's office for the Southern District of New York -- the same office that prosecuted this case -- a certain level of trust exists between the legal teams and they are working together after the fact. In any case, Cohen's other attorney, Lanny Davis, went on TV on Tuesday night and made clear that Cohen has a lot to say to any prosecutors who care to listen:

Davis also hinted broadly that Cohen could say Trump had advance knowledge of "hacking," although it's unclear which hacking he was talking about. CNN's Jeffrey Toobin pointed out that a Democratic-led House or the special counsel's office could give Cohen immunity without fear of jeopardizing prosecution now that he's pleaded guilty, and that would mean "Cohen would have to testify in grand jury and before Congress in public. We will hear more from Cohen."

Meanwhile, down in Virginia a jury found Paul Manafort guilty of eight of the 18 counts charged against him, largely having to do with tax evasion, bank fraud and failing to file reports on his foreign bank accounts. The jury deadlocked on 10 counts but Manafort won't see much to celebrate in that. He's going to prison for years. Now he faces his second trial in Washington next month, which will deal with lying to the FBI, money laundering and foreign lobbying. His lawyer said on Tuesday that Manafort would be "evaluating all his options."

This might explain why, on his way to a rally in West Virginia, Trump had nothing to say about Cohen but couldn't say enough good things about Manafort, who has so far refused to cooperate:

You can't help but wonder why he is being so kind and generous to Paul Manafort, whose criminal charges have no connection to the Trump campaign. One might even suspect that Manafort has information Trump would like him to keep to himself in exchange for a pardon.

It was an exciting day, and the news cycle was filled with predictions that this would shake loose Republican officials' complacency once and for all. The president had been implicated in a felony and yet another pair of top associates were guilty of serious criminal behavior. Surely this would break the spell and members of the establishment would rise up and do their duty.

But we've been here before, haven't we? Time after time, some outrage or incident has been expected to bring Trump down. Yet he's still in the most powerful office in the world, making mess after mess while his enfeebled party blindly follows along. It was only a few days ago that dozens of elder statesmen of the intelligence community and senior members of the military spoke out in unison to protest Trump's decision to revoke former CIA Director John Brennan's security clearance. One Republican senator's response was to back the president and call Brennan a "butthead."

Nonetheless, Tuesday was likely Trump's worst day in office, at least so far. It certainly seemed that way at his West Virginia rally where he appeared distracted and enervated. He whined about "elites" who dislike him, saying, "I'm smarter than they are. I have many much more beautiful homes than they do. I have a better apartment at the top of Fifth Avenue. Why the hell are they 'the elite'? . . . To me, I'm insulted."

On a day when two more of Trump's close associates found out they will face years in prison and the president himself was implicated in a federal crime, the crowd lustily cheered him up with a rousing round of "Lock her up." Bless their hearts.