Paul Manafort juror on Fox News: Only one holdout prevented Mueller team from winning convictions on all 18 counts 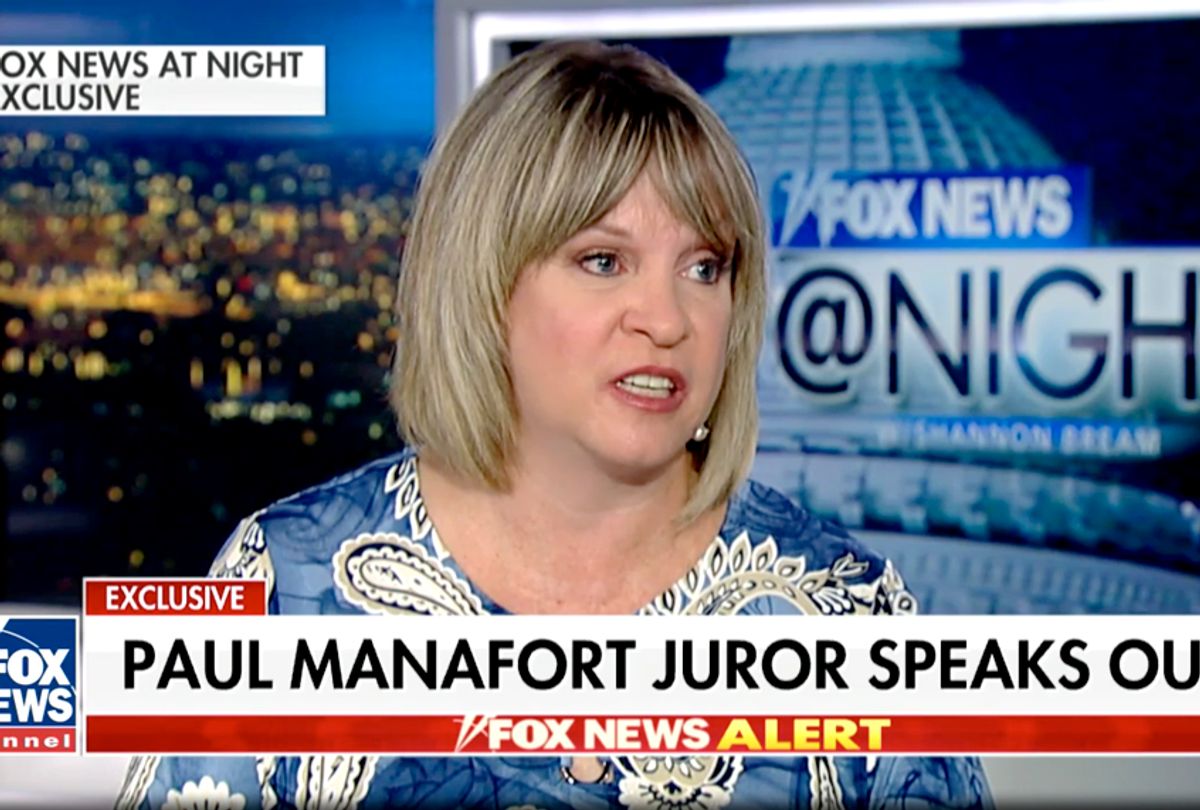 It turns out it was just one lone juror who saved former Trump campaign chairman Paul Manafort from being convicted on all 18 counts he faced in his Virginia trial.

Paula Duncan, a jury member who is an avid supporter of President Donald Trump, revealed to Fox News Wednesday night that it was this one lone juror who prevented Manafort from being found guilty on 10 of the charges.

"We all tried to convince her to look at the paper trail. We laid it out in front of her again and again and she still said that she had a reasonable doubt. And that's the way the jury worked. We didn't want it to be hung, so we tried for an extended period of time to convince her, but in the end she held out and that's why we have 10 counts that did not get a verdict," Duncan said in an interview on Fox News.

Duncan, who is the first juror of the 12-member panel to speak publicly, said Wednesday that although she "did not want Paul Manafort to be guilty," the evidence was "overwhelming."

An ardent Trump supporter, Duncan kept her "Make America Great Again" hat in her car while driving to the trial every day and called special counsel Robert Mueller's investigation a "witch hunt to try to find Russian collusion." Still, she said she thought the public deserved to know what happened behind closed doors.

"America, needed to know how close this was, and that the evidence was overwhelming," Duncan explained. "I did not want Paul Manafort to be guilty, but he was, and no one's above the law. So it was our obligation to look through all the evidence."

Duncan described the jury deliberations as heated and emotional at times, saying "crazily enough, there were even tears."

The Manafort juror noted that the president's name did come up during deliberations because "in the evidence there were references to Trump and his son-in-law and to the Trump campaign" but pointed out she didn't think politics played a role in the jury's decision.

"I think we all went in there like we were supposed to and assumed that Mr. Manafort was innocent. We did due diligence. We apply the evidence, our notes, the witnesses and we came up with the guilty verdict on the eight counts," she said.

Manafort, the longtime Republican political consultant who spent five months as President Donald Trump's campaign chair during the 2016 presidential election, was found guilty on eight of 18 counts of financial crimes by a federal jury on Tuesday and is facing up to 80 years in prison. He was convicted on five counts of tax fraud, two counts of bank fraud and one count of failing to properly disclose his foreign bank accounts.

One of the witnesses who testified against Manafort was his longtime business partner Rick Gates, who also worked on the Trump campaign and was considered the special counsel's key prosecution witness. Duncan described Gates as "nervous," and said some of the jurors had a problem accepting his testimony.

"We agreed to throw out his testimony and look at the paperwork, which his name was all over," Duncan said. "I think he would have done anything to preserve himself — that's just obvious in the fact that he flipped on Manafort."

Duncan was also critical of Mueller's prosecutors who handled the case, saying she thought the special counsel team seemed " a little bored" during the proceedings and were napping during the trial.

Manafort faces a second trial for an additional 14 criminal counts, including charges of obstruction of justice, failing to register as a foreign agent and conspiracy to launder money as part of an indictment brought by special counsel Robert Mueller's grand jury in Washington. That trial is slated to begin in September in a D.C. federal courthouse.

U.S. District Judge T.S. Ellis III kept the jurors' names under seal for their "peace and safety," as a result of the criticism and threats he had received during the high-profile trial. Duncan, however, indicted that she didn't feel threatened.

"I don't feel a threat. I'm an American. I'm a citizen. I feel I did my civic duty. I don't think I need to hide behind anything. I am not afraid at all," she said.