The murder of Mollie Tibbetts fits a pattern. Not a pattern of immigrant crime, but of men killing women 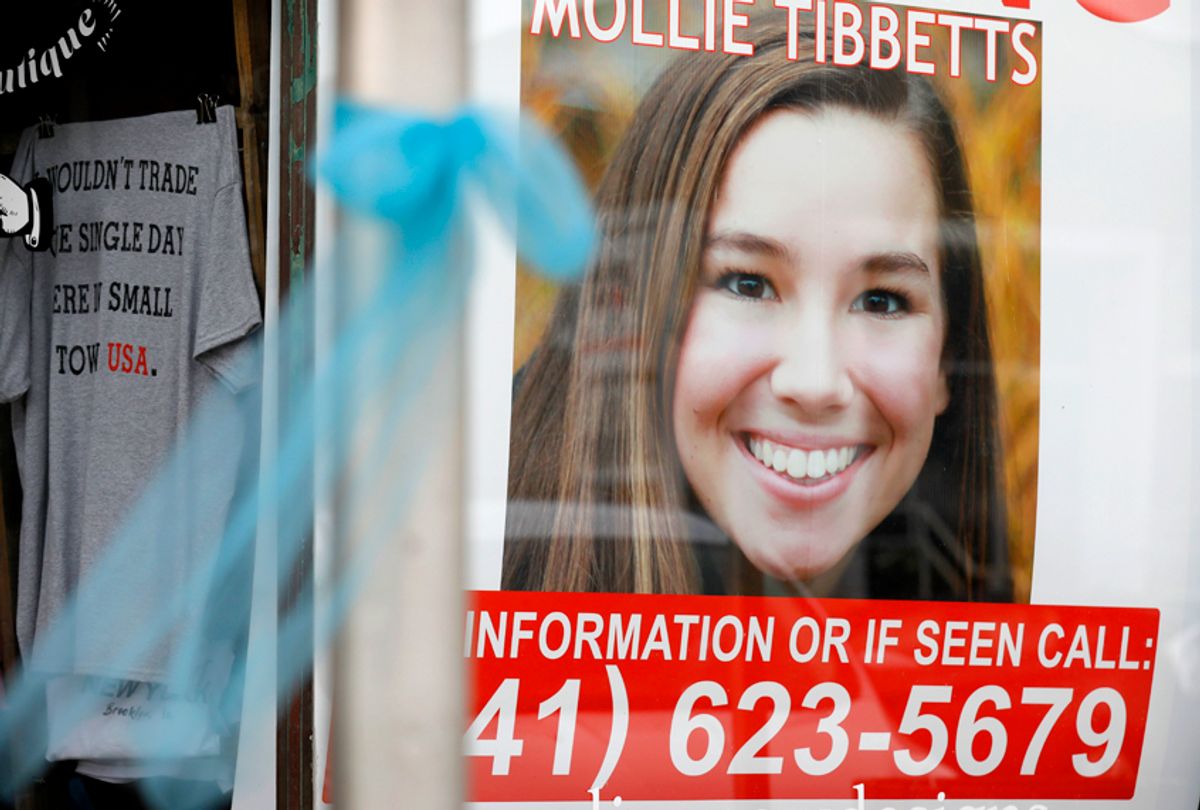 A poster for missing University of Iowa student Mollie Tibbetts hangs in the window of a local business, Aug. 21, 2018, in Brooklyn, Iowa. (AP/Charlie Neibergall)
--

Mollie Tibbetts, a 20-year-old psychology major from the University of Iowa, was found dead near her home this week, and a man named Cristhian Rivera was arrested for her murder and seems to have confessed. Rivera is a Mexican immigrant, though his legal status is still in dispute. Even though Tibbetts's aunt has already asked people not to politicize her murder for racist ends, right-wing pundits and Republican politicians have formed their gleeful squadrons of vultures.

At the front of the exploitation pack is, unsurprisingly, President Donald Trump, whose burgeoning scandals -- resulting this week in multiple convictions for his campaign manager and a plea bargain for his longtime personal lawyer -- clearly threaten the Republican Party's chances in the November election. So he's stoking racism in the base, hard. The White House released a video implying that its policy of separating families at the border to discourage them from applying for asylum could somehow have prevented this murder. White House Press Secretary Sarah Huckabee Sanders, like Trump himself, has exploited this murder from the podium. They've been joined by politicians like Gov. Greg Abbott of Texas and Vice President Mike Pence in insinuating that this murder demonstrates the inherent criminality of Latinos, and justifies efforts to restrict immigration along racial or ethnic lines.

But if people want to talk about the link between demographic identity markers and violent crime — especially murders like this one — than they shouldn't focus on ethnic identity or immigration status. There is one trait that Rivera has in common with the vast majority of people who commit crimes like this, and it's not his skin color or the nation where he was born. It's his gender.

The same conservatives who want to paint all Latino immigrants as dangerous because of this crime will no doubt cry that I'm a "man-hater" for pointing this out, but facts are facts. Maleness is far more strongly correlated with murder (and other violent crimes) than immigration status. Moreover, there are actual, well-researched reasons why this is so — and solutions that could change it. So instead of exploiting this situation to shore up a narrative about immigrants, people should be talking about how to change our social conceptions of gender so that men don't resort to violence.

First, some facts. As German Lopez at Vox explained on Wednesday, "In the US, immigrants are much less likely to commit crimes than their native-born peers," likely because the people who pick up and move to another country to make a better life for themselves are highly motivated to keep their noses clean.

When we look at gender and crime, a completely different pattern emerges. Most men, to be clear, are not murderers. But, by far, most murderers are men. According to FBI crime statistics, nearly 90 percent of the known people who committed murder in 2015 were male. While most murder victims are also men, when a woman is murdered, her killer is far more likely to be male. Nine out of ten women murdered in 2015 were killed by a man.

The moments before Tibbetts' death, according to police reports and Rivera's apparent confession, tell a sadly familiar story. She was jogging and minding her own business until some guy started running alongside her and harassing her. She declined to give him attention, and he got angry with her. She threatened to call the police and Rivera says he blacked out after that. But we he knew exactly where to find her body when the law caught up with him.

This kind of situation is all too familiar to many women, although of course it doesn't usually end in murder. (Unfortunately, that does happen.) You're out minding your own business and some man demands you drop what you are doing and give him attention, on his terms, likely attention of a sexual nature. If you refuse, he gets angry with you.

Again, few of these encounters escalate to violence, but many women — likely most — have experienced intimidation, threats or being followed. In what I've experienced personally and witnessed happening to other women, the people who do this are of all possible races and nationalities. The only common feature is that they're men.

Women have a lot to fear from strange men. But the truth is that only 16 percent of female homicides are committed by strangers. More than half of women who get killed are murdered by a current or former partner. For violent men, the sense of entitlement to control over a woman is much greater if they're in a relationship with her (or were in the past). So it makes sense, sadly, that that scenario can lead to murder.

To be absolutely clear, what feminists call "toxic masculinity" — socializing men to believe that being a man means being aggressive and domineering — leads to all those men killing other men, too. The 2015 FBI statistics show that most murders aren't committed in service of another crime, like a robbery, but are the result of men fighting each other. Sometimes that's about "gang violence," but mostly it's not. Just "arguments," reason unspecified, that end with someone getting killed.

But woe unto anyone who dares question why we raise boys to believe they must act tough and belligerent to be "real" men. When progressive activist Symone Sanders tweeted, "This is about toxic masculinity. Mollie Tibbetts lost her life b/c a man couldn’t take her saying no," professional right-wing bubblehead Tomi Lahren exploded at her.

"Are you currently high?" Lahren replied. "Encouraging men to act more like women won’t stop illegal immigrants (or anyone else for that matter) from murdering."

Lahren's reaction tells us a lot about why so many men get it in their heads that being a man means behaving like a vicious, entitled jerk. Her tweet literally equates courtesy and consideration with acting "like a woman." And implicit in her sneering is the idea that acting like a woman is the worst possible thing a man could do.

There is a minor bit of good news, in that the murder rate in this country, despite conservative paranoia about violent crime, has been generally on the decline for decades. The reasons for that are multi-faceted and a lot is still unknown, but it's entirely possible the much-bemoaned decline of rigid, domineering norms of masculinity might be a contributing factor.

But despite this decline, the murder of Mollie Tibbetts fits a well-known and well-documented pattern of men killing women because they can't control them. That anger and entitlement is not inevitable, no matter what right-wingers claim to believe. Another way of viewing manhood, one that's not about violence and control, is possible.