A move long advocated by the "Bernie Sanders wing" looks likely, which should shift the contours of the 2020 race 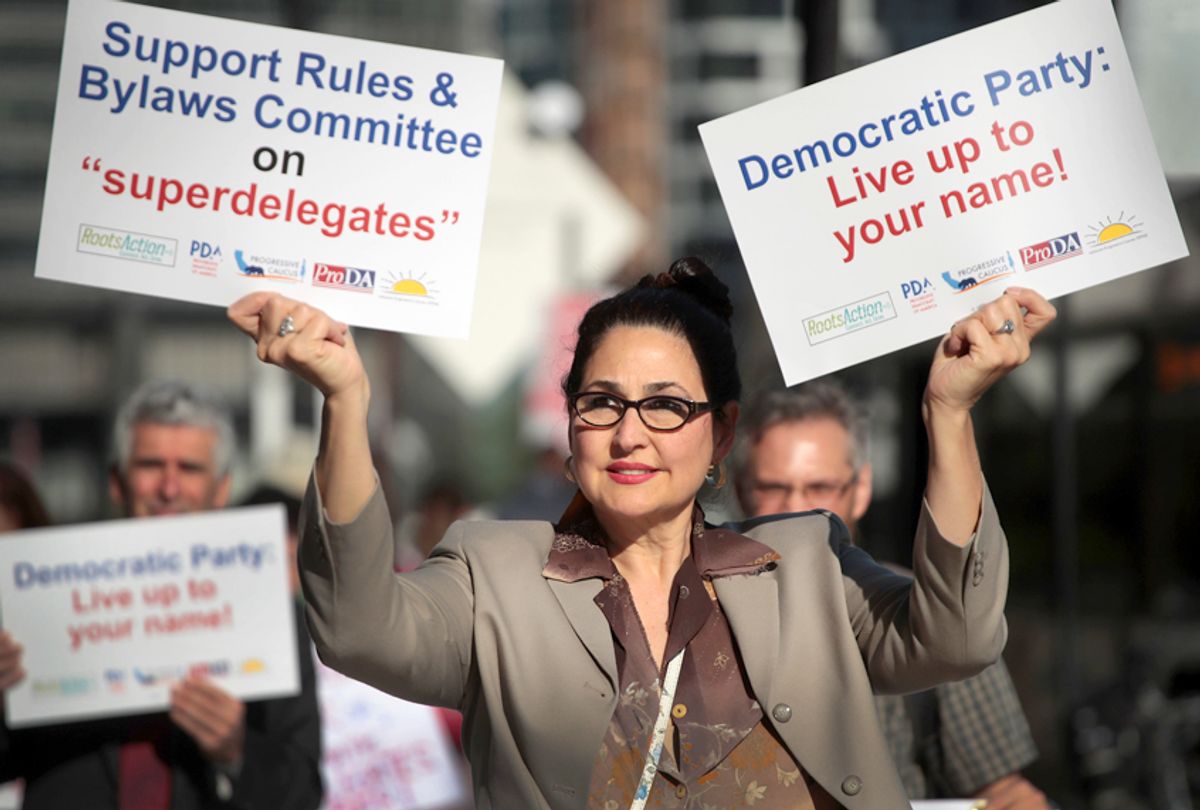 Demonstrators protest outside the Hyatt Hotel where the Democratic National Committee (DNC) were kicking off their summer meeting on August 23, 2018 in Chicago, Illinois. (Getty/Scott Olson)
--

The Bernie Sanders wing of the Democratic Party appears headed toward a victory at the Democratic National Committee summer meeting in Chicago, despite last-ditch efforts by some DNC members to modify a party proposal limiting superdelegates’ role in nominating the 2020 presidential nominee.

On Saturday, the DNC’s members will vote on a slate of rule changes, including only allowing delegates elected in state caucuses and primaries to have a first-round vote at the 2020 national convention when nominating the Democrats’ next presidential candidate.

“My hunch is we will get that vote,” Maryland Democratic Party chair Kathleen Matthews told the Chicago Sun-Times. “I think that’s where it’s heading. … We have more than 30 state party chairs who have signed a letter saying we support this reform. And it’s because we believe it will restore trust in the party. It’s the right thing to do — to be a Democratic Party, not only with a capital ‘D,’ but with a small ‘d.’”

In 2016, Sanders won 45 percent of the elected national convention delegates but could not make inroads into superdelegates, who made up 30 percent of the national convention vote and are automatic unpledged delegates — elected officeholders, state party officials, leaders of key constituencies and activists. They largely supported Hillary Clinton.

Had Sanders won a majority of elected delegates in 2016, his team was planning to challenge the vote of superdelegates on the opening gavel and walk out if they did not prevail. But that never happened.

Instead, the DNC created a Unity Commission that crafted a slate of rule changes for 2020, including stripping the unpledged delegates of their first-round vote. The commission also proposed changes to make primaries and caucuses more accessible, from Election Day registration to voting by mail. All of these proposals went through the DNC Rules and Bylaws Committee, which slightly modified them before this weekend’s DNC membership vote.

But longtime DNC members who have been superdelegates are not going quietly into the night. On Thursday, they brought a series of last-minute proposals to the Rules Committee that would still chasten superdelegates without stripping them of their first-round nominating vote.

“Rules and Bylaws shot down every alternative compromise proposal,” Debra Kozikowski of Massachusetts, a longtime grassroots organizer and elected DNC member, texted. “[California Rep.] Maxine Waters has arrived thinking she will have an opportunity to address the RBC, who blew through to adjourn and will not be continuing to meet tomorrow though it is on the schedule. I think there will be some interesting conversations before Saturday’s vote.”

Earlier on Thursday, Kozikowski, a superdelegate, was critical of the post-2016 reforms and described her “compromise” proposal — one she hoped would go before the full DNC.

She started with some history. Unpledged delegates were created by amending the DNC charter in 1984 with the goal of bringing grassroots voices into the process. Rules changes come and go over the years and are not substantial reform as many Berniecrats believe, she said.

Kozikowski’s compromise, which the Rules Committee rejected, would let superdelegates — unpledged delegates — keep their first-round vote unless they had previously endorsed a candidate.

“If they publicly endorse, support, give money to, whatever, any presidential candidate prior to the first vote of convention or the end of the primary, they get sanctioned,” she said. “America votes first. That’s my premise. If these unpledged delegates pledge themselves out there, they forfeit their first ballot vote. … As you have probably heard me say before, superdelegates really ought to keep their super mouths shut.”

Kozikowski said she and others withdrew their proposals from the Rules Committee so they could try to take them to the full DNC on Saturday.

On the other side of this divide were Berniecrats, who are still wincing from their poor treatment at the hands of pro-Clinton party leaders in 2016. Since then, progressives have blanched as DNC chairman Tom Perez has backed their superdelegate reforms, on one hand, but then supported centrists and corporate interests on the other — such as rejecting a ban on taking donations from the fossil fuel industry.

But the superdelegate issue has great importance for Berniecrats. It goes back to 2016, when the presence of pro-Clinton superdelegates hovered as a brick wall blocking the nomination. Since then, superdelegate reform has become their foremost measure of whether the DNC is recognizing the activist progressive wing of the party.

“Many voters interpreted this [the existence of superdelegates] as indicating that party elites had already put their thumbs on the scales,” said Norman Solomon, who in 2016 organized a Sanders delegate network and was in Chicago lobbying on behalf of a half-dozen progressive groups. “Passage of this proposal from the DNC’s Rules and Bylaws Committee would give a big lift to Democratic Party outreach and enthusiasm nationwide — indicating that the party is opening toward grassroots democracy.”

Solomon was cautiously optimistic that the superdelegate rule change would pass, but he said progressives still have a testy relationship with the party.

“My feeling is there are various tradeoffs. It reminds me what [California Gov.] Jerry Brown said very proudly, ‘I’m in a canoe. I paddle on the left. I paddle on the right.’ And I think, for better and worse, mostly worse — but in some cases better — that is what’s happening with Tom Perez. He endorses [New York Gov. Andrew] Cuomo [over progressive Cynthia Nixon]. He reverses this ban on fossil fuel money. But on the other hand, he’s fighting publicly very hard to pass this good reform on superdelegates.”

Former Maryland governor sees one upside to this president: He's toughened up the opposition party.