All the president’s friends

Flynn, Cohen, Pecker, and Weisselberg were what Donald Trump calls friends, and then they flipped 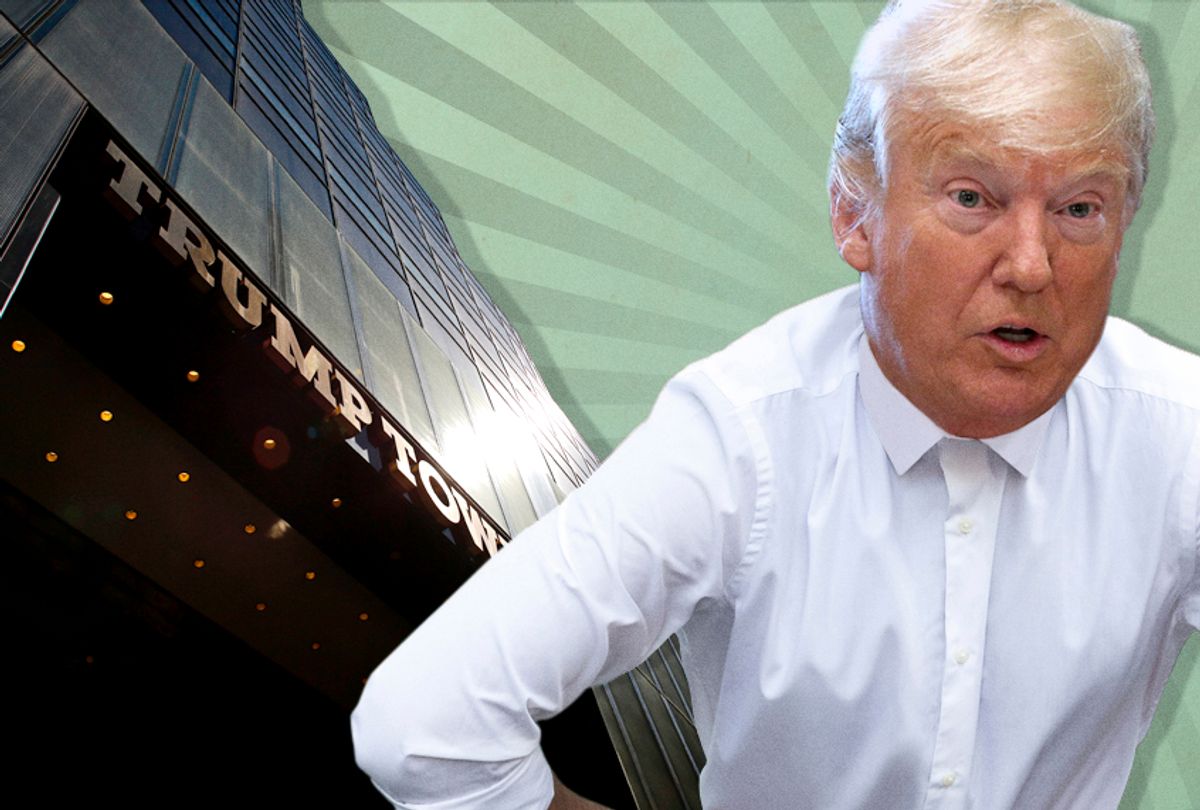 Try to imagine for a moment that you are Donald Trump. Doesn’t really matter when. Back when he lived in Trump Tower in New York and ran the Trump Organization, or after he was elected president and moved into the presidential residence in the White House. What do you think his days were like back in New York, or now in Washington?

They were all the same. He slept, almost always by himself, in a great big bed in a huge bedroom. He got up in the morning and ate some breakfast and got dressed and went down to his office either in Trump Tower or the White House. Lots of meetings. Lots of phone calls. Lately, lots of tweets. Back to the residence, supper, and back into the big bed in the big bedroom and then the same thing all over again.

You know what Trump never did back in New York or lately in Washington? Hang out with his friends. You know why? He never had many friends, not real friends, anyway, the kind of guys you hang out with and shoot the shit and maybe crack a few beers.

Oh, he had lots of “friends,” which is to say, people who were around him because he was the source of their income, or their connection to power, or their connection to other connections. You’ve heard the names of a few of them. There was Roger Stone, who is often described as a long-time political adviser to Trump and a “friend.” Stone worked for Trump before he announced his run for President in 2015 and then for a while afterwards, but he was let go almost before the campaign really began.

There was Trump “friend” Thomas Barrack, a Lebanese-American investor who became a billionaire investing in the Middle East. He is the guy who recommended that Trump hire Paul Manafort to manage his campaign in 2016, calling him a “killer” in a letter to Trump. Barrack was rewarded by being made chairman of Trump’s inauguration committee, which raised $107 million and paid $26 million to a New York party planner and friend of Melania Trump.

Barrack is also the guy who made the introductions that led to another Lebanese-American, George Nader, setting up the infamous meeting in the Seychelles Islands between Erik Prince and a Russian banker close to Vladimir Putin in order to establish a “back channel” between Trump and Putin. George Nader was stopped by investigators for Robert Mueller at Dulles International Airport on his way to a big party at Mar-a-Lago to celebrate the first anniversary of Trump’s presidency. He was questioned by the FBI and searched and his electronic devices were seized. He is now said to be a cooperating witness in the special counsel’s probe of Russian interference in the presidential campaign of 2016.

READ MORE: The end really is near: A play-by-play of the coming economic collapse

So even while Barrack himself isn’t a subject of Mueller’s investigation, George Nader, the man Barrack brought into the Trump orbit, is a subject. He has flipped.

There was Trump “friend” Michael Flynn, former head of the Defense Intelligence Agency and the first high-level national security official to support Trump’s candidacy. Flynn became Trump’s chief foreign policy adviser. He was said to be the person closest to Trump throughout the campaign and traveled with Trump on his private jet to most of his rallies. He was given a prime slot at the Republican National Convention and gave a speech where he led chants of “lock her up,” (referring to Hillary Clinton). Flynn became Trump’s chief foreign policy expert during the transition and was quickly appointed National Security Adviser after Trump took office. He lasted 24 days in that job before being fired for lying about his contacts with Russian Ambassador Sergey Kislyak about lifting Obama’s sanctions on Russia. Flynn was indicted for lying to the FBI and pleaded guilty last year and is a cooperating witness for Mueller in the Russia investigation. He has flipped.

There was Trump “friend” Michael Cohen, Trump’s personal lawyer for over a decade, who handled everything for Trump from threatening reporters who were writing critical articles about Trump, to working on Trump’s long-dreamed-for Trump Hotel in Moscow, to managing bimbo eruptions just before the election in 2016. Cohen was so close to Trump he was “described as the sixth Trump child,” according to Vanity Fair.

Cohen’s loyalty to Trump was complete: In advance of his 2017 testimony before the House Intelligence Committee, he said he would “take a bullet” for Trump. He told Vanity Fair, “I’d never walk away,” from President Trump. “Even at the expense of his family?” he was asked. “I’d never walk away,” Cohen repeated. When the Vanity Fair reporter pointed out that was “a tremendous amount of loyalty to the president,” Cohen replied that “the president deserves it.”

Cohen pled guilty to eight felonies in a New York City courtroom this week, including two crimes involving payoffs to women who claimed to have had affairs with Trump. Cohen implicated Trump in both payoffs, saying he made the arrangements “in coordination with and at the direction of a candidate for federal office,” referring to Trump, according to a report in The New York Times. Cohen’s admission in court implicated Trump in the commission of the same felonies he pled guilty to. He is said by his lawyer, Lanny Davis, to be willing to “tell the truth” to Robert Mueller or anyone else who asks him about Trump. He has flipped.

There is Trump “friend” David Pecker, chairman of American Media, Inc., which owns the National Enquirer. According to The New York Times, “Mr. Pecker has been close to Mr. Trump since the 1990s, and has served as a protector dating back to before the days when Mr. Trump was the host of his reality show, ‘The Apprentice.’”

Pecker was involved in a payoff to Karen McDougal, a former Playboy playmate who said she had a 10 month affair with Trump in 2006. Pecker is referred to on a tape made by Michael Cohen in Trump’s office in 2016 when he and Trump discussed using the National Enquirer in the payoff to McDougal. (The payoff was for $150,000 in a so-called “catch and kill” arrangement whereby the National Enquirer purchased the rights to Ms. McDougal’s story of her affair with Trump and then proceeded to “kill” the story while wrapping up McDougal in a non-disclosure agreement.)

Pecker was referred to in court by Michael Cohen last week, thus implicating him in the crime he pleaded guilty to. Pecker has reportedly been given immunity from prosecution in the matter and is cooperating with prosecutors in New York who are looking further into the campaign finance crimes involved in both the McDougal and Stormy Daniels payoffs. He has flipped.

The latest Trump “friend” to agree to cooperate with prosecutors is the long-time chief financial officer of the Trump Organization, Allen Weisselberg. Weisselberg was involved in the payoffs to both Stormy Daniels and Karen McDougal. He was referred to by name on the tape Michael Cohen made of the conversation he had with Trump about paying $150,000 to Karen McDougal and was referred to in Cohen’s guilty plea as having made the arrangements to repay Cohen for the $130,000 he put up out of his own money to payoff Stormy Daniels. Weisselberg gave the order to pay Cohen out of monies from the trust Trump set up to hold his assets while he is president. Weisselberg is one of two officers of the trust. The other officer is Donald Trump Jr. Experts say that no matter how Trump arranged to repay Cohen, either personally, or from the Trump trust (which is a corporation), a payment to provide hush money to benefit his campaign is illegal.

Weisselberg has worked for Donald Trump since the 1970s, when Trump’s father ran the company. He has always been said to be the guy “who knows where the bodies are buried” in the Trump Organization. He has flipped.

The fact of the matter is this: Trump doesn’t have any real friends. He has “friends,” which is to say, people who are loyal to him because they are on his payroll, or they’re using Trump to get power or connections. But real friends? The kind of guys who will stand by you and not “walk away” when the hammer comes down?

So far, that count is zero.

Prosecutors in Washington, D.C., New York and Virginia are doing the same thing prosecutors did during Watergate. They are following the money. And the money is leading them to the innermost circles around Trump, his White House and his company, the Trump Organization. They’ve already found the money that was used in paying off and silencing women who threatened Trump’s campaign for president in 2016 with stories of fast sex and lengthy affairs.

My bet is, Trump’s “friends” who are keeping those secrets will do the same thing the rest of them have done when the FBI came knocking. They’ll flip. And Trump will flip out.