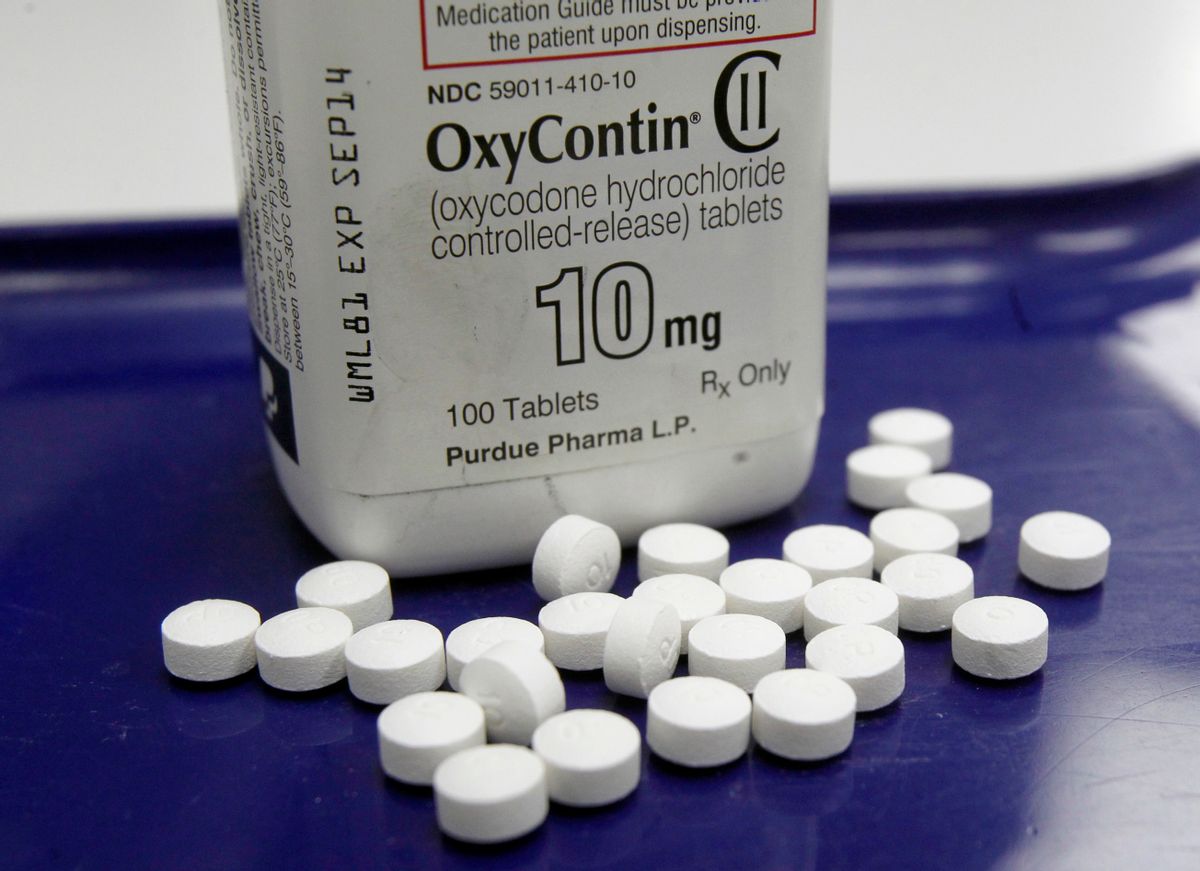 Two decades ago, Purdue Pharma produced thousands of brochures and videos that urged patients with chronic pain to ask their physicians for opioids such as OxyContin, arguing that concerns over addiction and other dangers from the drugs were overblown, company records reveal.

Kaiser Health News earlier this year posted a cache of Purdue marketing documents that show how the pharmaceutical company sought to boost sales of the prescription painkiller, starting in the mid-1990s.

“Fear should not stand in the way of relief of your pain,” a pivotal marketing brochure said.

Purdue said it handed out thousands of copies of the brochure, which emphasized consumer power in treating pain, as well as a videotape. “The single most important thing for you to remember is that you are the authority on your pain. Nobody else feels it for you so nobody else can describe how much it hurts, or when it feels better,” the pamphlet states.

This week, the New York attorney general’s office filed another suit that accuses Purdue of operating a “public nuisance” in it sales tactics and marketing of opioids. Like many others, the suit demands compensation for addiction treatment costs and other problems. Purdue and other drugmakers have denied all allegations.

President Donald Trump said Thursday he wants the federal government to sue drugmakers in response to the addiction epidemic.

The Purdue brochure from the late 1990s spurred recent criticism from drug safety experts. Dr. G. Caleb Alexander, a physician at the Center for Drug Safety and Effectiveness at Johns Hopkins Bloomberg School of Public Health, said the sales pitch was “simply not true” and called it “a smoking gun.”

“We have learned the hard way that many patients develop opioid [addiction] when using these medicines as prescribed,” he said.

Alexander said other drugmakers also appealed to patients hoping to influence their doctors — a tactic that was relatively new in the late 1990s. But Alexander said he was “shocked” to hear that Purdue did so with OxyContin, given the risks posed by long-term use of the morphine-like narcotic.

“These drugs [opioids] are in a class of their own when it comes to the harms that they have caused,” Alexander said.

In 1998, as Purdue hawked OxyContin for conditions such as arthritis and back pain, it decided to “increase communications” with patients, company records show.

The goal: “convince patients and their families to actively pursue effective pain treatment. The importance of the patient assessing their own pain and communicating the status to the health care giver will be stressed.”

Purdue’s six-page pamphlet for patients, provided to the Florida attorney general, was titled “OxyContin: A Guide to Your New Pain Medicine.” “Your health care team is there to help, but they need your help, too,” the pamphlet says. It says OxyContin is for treating “pain like yours that is moderate to severe and lasting for more than a few days.”

To patients or family members worried about addiction, Purdue’s pamphlet said: “Drug addiction means using a drug to get ‘high’ rather than to relieve pain. You are taking opioid pain medication for medical purposes. The medical purposes are clear and the effects are beneficial, not harmful.”

Asked to comment this week, Purdue spokesman Robert Josephson said the company “discontinued the use of this piece many years ago.”

Dr. Michael Barnett, a physician and assistant professor at the Harvard T.H. Chan School of Public Health, said that some of Purdue’s early marketing claims may have seemed reasonable to many doctors 20 years ago.

But he faulted the medical profession for not demanding scientific evidence that opioids were in fact safe and prudent for widespread use.

“I think a lot of physicians are coming to the realization that a lot of what we were taught about pain management was pure conjecture,” he said. “I feel foolish for believing it.”

In hindsight, he said, Purdue’s sales tactics seem “almost a satire of an unscrupulous corporation that really has no interest in understanding the implications and complications of people using their drugs.”

Dr. Art Van Zee, a physician in southwestern Virginia who was among the first to recognize the ravages of OxyContin misuse, said that some people who became addicted were drug abusers.

But he added: “There clearly are people that I’ve taken care of who took it as directed orally and became opioid-addicted.”

Purdue also paid a New York City production company to shoot a videotape called “From One Pain Patient to Another,” featuring testimonials by seven patients from the Raleigh, N.C., area under the care of pain doctor Alan Spanos. Filming took place at the patients’ homes, places of work and other area locations on July 17, 1997, according to the documents.

Purdue did not pay the patients, though Spanos received $3,400 as a “physician spokesman” on that video and another, the company records state. Contacted recently by phone, Spanos would not comment. In the documents, Purdue said that the patients “participated willingly, wishing to speak out regarding the importance to them of being able to receive effective therapy for their chronic pain.”

Between January 1998 and June 2001, Purdue distributed 16,000 copies of the video to doctors, who showed them to selected patients.

The video did not mention OxyContin directly, but the Food and Drug Administration did balk at a claim in the video that fewer than 1 percent of people taking opioids became addicted. The FDA said that claim was not substantiated, according to a December 2003 General Accountability Office audit.

Purdue destroyed remaining copies of the video in July 2001, including 4,434 Spanish-language versions, according to the company records.

By then, annual OxyContin sales had topped $1 billion as Purdue pushed to “attach an emotional aspect to non-cancer pain so physicians treat it more seriously and aggressively,” according to the company’s marketing reports.

Asked about the video, Purdue spokesman Josephson said the drugmaker has not made that claim — regarding 1 percent addiction — “in more than 15 years.”

Purdue submitted the marketing records to the Florida attorney general’s office during its investigation of the company. The state settled the case in 2002 when Purdue agreed to pay $2 million to help set up an electronic prescription-tracking program.

Florida officials released the records to two Florida newspapers in 2003 after Purdue lost a court battle to keep them confidential. KHN posted some of those documents earlier this year for readers to review on its website.