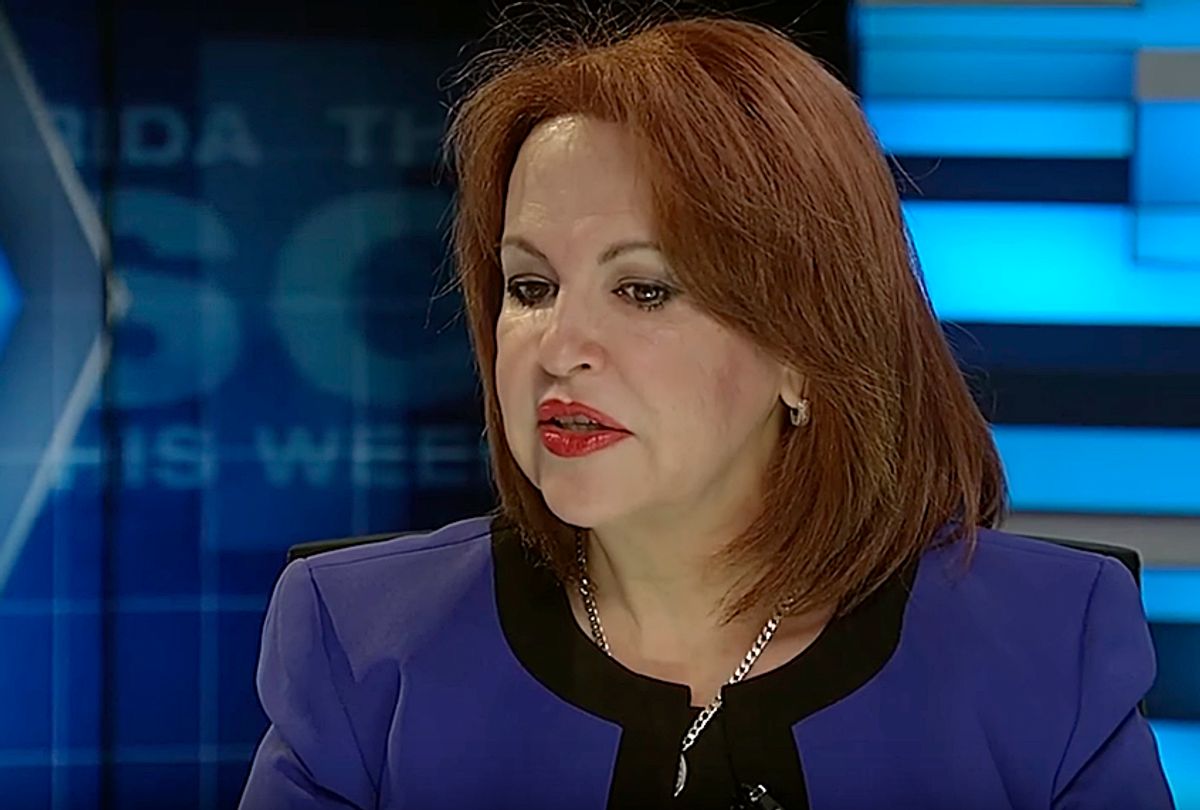 Bettina Rodriguez Aguilera, a Republican vying to replace retiring Rep. Ileana Ros-Lehtinen in Florida's 27th congressional district, once claimed that she was abducted by aliens as a child.

Several years before the Florida Republican announced her candidacy, she appeared on Spanish-language television programs, most recently in 2011, and detailed her experiences with aliens.

In one video that was uploaded to YouTube, Rodriguez Aguilera revealed she first encountered aliens when she was 7, after her parents asked her to go outside their home. She said she was taken aboard a round spaceship with three extraterrestrial creatures — two women and a man — were tall, full-figured and blond. They wore robes and spoke telepathically. She boarded the space craft, she said, where she claims the aliens told her, "God is a universal energy, not a person. It's in everything. God talks to people and they understand it in different ways, but there's only one religion."

In another interview, the onetime council member from Doral, Fla., said the beings, with their arms stretched open, reminded her of Rio de Janeiro's Christ the Redeemer statue, and that she saw them again throughout her teenage years. She also revealed she saw a UFO when she was 17.

NASA denied the existence of extraterrestrial life and aliens to Salon when asked about Rodriguez Aguilera's out of this world claims.

"NASA continues to seek out answers to some of the fundamental questions of humanity, like whether we are alone in the universe. However we have yet to find evidence of extraterrestrial life," NASA press secretary Megan Powers said.

But in December of 2017, a former Pentagon official who led a government program to research potential UFOs said he believes there is evidence of alien life reaching Earth.

"My personal belief is that there is very compelling evidence that we may not be alone," Elizondo told CNN at the time. Elizondo said the program had identified "a lot" of strange aircraft while it was in existence. "These aircraft — we'll call them aircraft — are displaying characteristics that are not currently within the U.S. inventory nor in any foreign inventory that we are aware of," he said.

The program — the Advanced Aviation Threat Identification Program, which investigated reports of aerial encounters and unknown objects by military pilots brought to the Pentagon's attention — was reportedly launched in 2007 with support from former Sen. Harry Reid, D-Nev., then the majority leader of the Senate.

Rodriguez Aguilera is running to replace outgoing Rep. Ileana Ros-Lehtinen, the first Cuban American elected to Congress and one of the few moderate Republicans in Congress. Ros-Lehtinen, who serves much of the Miami area, announced in April 2017 that she will leave Capitol Hill at the end of her term, presenting Democrats with an opportunity to pick up a South Florida congressional seat that Hillary Clinton won over Donald Trump by 20 percentage points in the 2016 presidential election.

Rodriguez Aguilera is a GOP longshot in the race for Ros-Lehtinen open seat. Yet last weekend, the Miami Herald endorsed her bid for Congress ahead of Tuesday's primary out of a parade of nine candidates.

"We realize that Rodriguez Aguilera is an unusual candidate," the Miami Herald admitted in an editorial nine days before the primary election. The board agreed with the former Doral councilwoman that her past comments about extraterrestrial creatures are a "non-issue."

The board wrote that Rodriguez Aguilera is a "strong candidate" with "plausible conservative ideas" who has an impressive background as a former city official and a business consultant.

According to the daily Miami newspaper, Rodriguez Aguilera is one of three best-known candidates in the crowded Republican primary, though she's not seen as the front-runner. Her rivals, Spanish-language television star Maria Elvira Salazar and former Miami-Dade Commissioner Bruno Barreiro, declined to take part in the Herald's interview process. Barreiro's campaign told the Herald that he was not seeking their endorsement and Salazar’s campaign said that her schedule was booked until Aug. 28 — Election Day.

The Florida Republican did not respond to Salon's request for an interview, but she recently told the Associated Press that her account of abduction by aliens does not define her. "It has nothing to do with what I have done. It happened when I was 7 years old," she said. "I am so proud of the Herald and what they did."

It is unclear if Rodriguez Aguilera would sponsor legislation focusing on extraterrestrial contact and UFO research if elected.

"The theme of my campaign is people above politics. I train people around the world about democracy," she told the Associated Press. "I have the most experience. I can go in there and start working just as I have all my life."

Rodriguez Aguilera is the daughter of a Cuban political prisoner. She was previously a social worker, ombudsman at the Miami-Dade county manager's office and now runs a business training women in other countries how to run for political office and develop leadership programs. Her campaign website describes her as an "entrepreneur, educator and community leader" with "over 30 years of experience in the private and public sectors."

Rodriguez Aguilera's daughter, Bettina Inclán Agen, is a political strategist and former director of Hispanic outreach for the Republican National Committee.Agen is married to Jarrod Agen, Vice President Pence's deputy chief of staff and communications director. Jarrod Agen did not respond to Salon's request for comment asking if the White House will endorse Rodriguez Aguilera ahead of Tuesday's primary.