A "peaceaholic" and haunted soul, Padraig O’Malley is the subject of "The Peacemaker"

O'Malley played a crucial role behind the scenes in peace negotiations in South Africa, Northern Ireland and Iraq 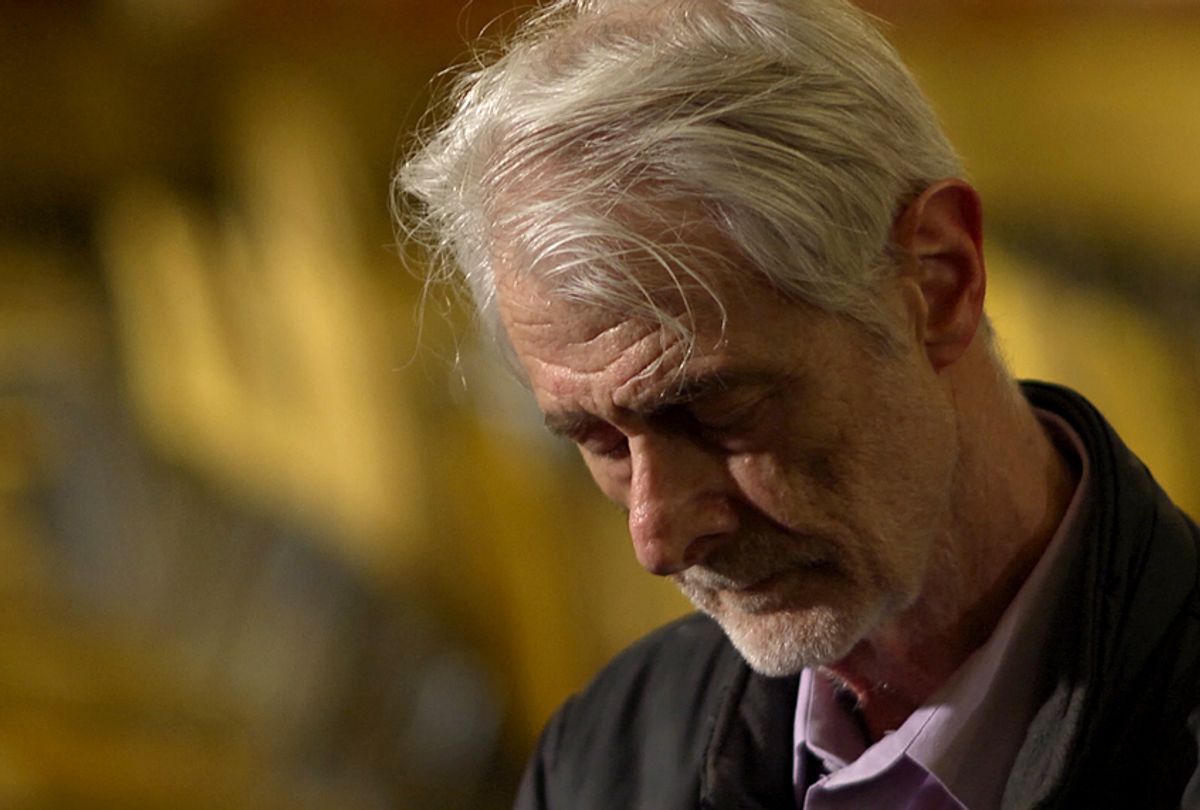 Samuel Beckett did a darn good job distilling the human condition with his words, “You must go on. I can't go on. I'll go on.” But the sentiment really hits the nail on the head when applied to Padraig O’Malley, a troubled, recovering alcoholic Irishman who dropped out of Harvard when he gambled his college scholarship fund on the Muhammad Ali-Joe-Frazier fight in 1971, and went on to dedicate his life to mediating seemingly intractable, international conflicts.

In “The Peacemaker,” a new documentary released on iTunes last week, director James Demo traces O’Malley’s largely unheralded accomplishments (in Northern Ireland, South Africa, Iraq, Kosovo) and strikes deepest when he confronts O’Malley’s war with himself. Demo focuses on O’Malley’s addictive personality and his desperate attempt to “escape from utter despair,” which he himself likens to Becket’s wisdom.

“I am surprised by the reactions,” O’Malley tells Salon of the pre-release screenings. “I feel embarrassed by viewers who say they find it ‘inspiring,’ etc. I see nothing inspiring in it. See, it’s one of a struggle with myself. I am not sure I am winning, and in some ways quite pathetic — demons that in some way should have found an accommodation with each other after decades of fierce fighting.”

As for the film, he says, “It is an accurate presentation of a period of my life. There are probably some things I might have liked to have seen done differently but to me it represents Jim’s own artistic journey.”

Salon asked O’Malley how he views the current state of world conflict; “Globalization of information makes us more aware of intra state conflicts, video making us visceral observers,” he writes via email. “Alleppo fell & the cameras moved on. But the world has never been a less violent place, no big wars killing hundreds of thousands . . .”

As for our current president’s input, he writes; “Trump’s disregard for the delicate balance of deterrence has increased likelihood of more conventional wars. We are complacent about the horrendous devastation nuclear war would bring; policy makers a little more prone to consider ‘limited/ tactical’ nuclear options — frightening nonsense seeping into the language as is ‘upgrading’ nuclear stock. How do you upgrade annihilation?”

Salon also reached out to the director, Demo, who engaged in the following discussion of the film.

How did you come to this story and did you have a hard time convincing Padraig to do it?

I heard about Padraig in 2008 at a storied pub in Cambridge, The Plough and Stars, that I lived around the corner from and where I used to drop in at for a pint. The manager knew I was a filmmaker and she told me one night how the owner of the bar, Padraig O'Malley, was in Iraq during the height of the insurgency, trying to get all the leadership — Sunni, Shia and Kurds to a peace table and that he was enlisting the former chief negotiators from Northern Ireland and South Africa to facilitate a peace agreement. I thought the idea was brilliant and wondered the obvious; “how is this bar owner doing this!?” Then I heard Padraig was in recovery and he was running around the Green Zone in Iraq looking for an AA meeting. I was fascinated and I had to meet him.

Padraig agreed to do the film pretty quickly after we met and one reason was because it was a potential opportunity for him to help fundraising for his peace work. But the deeper reason, I think, is that part of his recovery was to make amends. I heard he had recently been doing this with people in his life and I think he was ready for an honest account of his journey.

Which of O’Malley’s peace accords do you consider his greatest achievement?

Unquestionably bringing Nelson Mandela into the Northern Irish peace process. It was one year before the Good Friday Agreement and the peace process was stalled. Padraig had been in South Africa documenting the transition from Apartheid and he noticed similarities between the conflict in Northern Ireland — a conflict he had been working in for several decades — and what the South Africans had been through. Mandela agreed to help if the Northern Irish wanted it and Padraig set off to make it happen — which was close to impossible because the two sides had a mandate not to meet. After months of painstaking work he pulled it off and brought all the political parties, including those that represented the violent paramilitaries, to South Africa. I interviewed Martin McGuinness — the former chief of staff of the IRA and Sinn Fein's chief negotiator — and he called it “a groundbreaking moment in the peace process.”

He’s an important man behind the scenes in these agreements but it’s difficult to determine his actual role.

Padraig is the person who gets both sides of a conflict to a table. He is careful to say, he doesn’t make peace for people, they make it for themselves, but he is the back room player that creates an opportunity. His greatest talent to me is to get people in a conflict to trust him because he can be ideologically neutral, has an iron persistence and is fearless. As an Irish Catholic he would walk into hard core protestant neighborhoods in Belfast and go drinking in their pubs or leave the green zone in Iraq to meet with elements of the insurgency — and convince them he could be an honest broker. It takes months, often years, to continuously visit to gain trust and most of this work is premised on the fact it will likely be a failure. What drives Padraig to go to these extremes given what he is up against? That is the question I wanted the answer to.

Can you take us behind the moment you asked O’Malley if he loves anyone?

When I began filming Padraig at his apartment it became obvious that he was living in isolation and had very few personal relationships. As I interviewed people in the periphery of his life, many who had been past romantic partners, they would say that all of his relationships were instrumental, they served a purpose to allow Padraig to do the work. In interviews with his exes there was this palpable sense that their love had been unrequited — for years sometimes. All noted how his life was compartmentalized, that there was always a piece of Padraig’s life closed off that inhibited any chance at real intimacy. I began to wonder how he felt about the people in his life and if he even was capable of loving someone. As you see in the film, Padraig is heartbreakingly honest in his answer — and it’s probably best not for me to describe it here but just to say it is for me the most moving moment of the film.

How have your thoughts about alcohol evolved while making the film? It may be a curse for O’Malley but it sure has helped bring people together, as evidenced in the film.

Not so much alcohol but certainly my thoughts about addiction have changed. There is a scene in the film where he is visiting his foster daughter Gladwin and Pat Keefer, his partner in raising Gladwin, during the holidays. Padraig was working the whole time I was there, up in this small loft segregated from all the life in the house. I asked him why and he said that the work was an “escape from utter despair.” Padraig’s addictions help him keep these darker wolves at bay, and the manifestation of that is this incredible work towards the greater good. Most well adjusted people have families, take regular jobs, go on holiday and derive meaning in the context of everyday life. They don’t look at Iraq and say “I am going to go there and risk everything to try to fix that.” He is an anti-hero in that sense, a paradox and the world is better for it.

How would you characterize the state of peaceful resolutions to world conflicts in the age of Trump?

One of the most surprising things that have happened since our festival premiere is how much the context of the film has changed over the past year and a half. We screened during the festival run in the UK at Sheffield with the backdrop of Brexit, in Colombia the day after the signing of the FARC peace agreement — and used the film in support of the plebiscite — and have screened all around the US during the most divisive election of my lifetime. If there is any lesson from Padraig’s work to heed now it is that we need to keep trying to reach across the divide, while certainly maintaining our core principles, but to keep trying. We are all learning that it is an extremely difficult thing to do but the alternative often leads to conflict.

Is the term, peaceaholic, ever bandied about in O’Malley’s field (or in your editing room)?

In the penultimate scene of the film, Padraig is alone in his apartment struggling with the challenges of physically slowing down and he begins to talk about restarting his work in Iraq. He talks of how he could get access to the prime minister and all the exciting steps to make it happen, but then he says “but given Iraq (the state of the conflict), it wouldn’t make a damn bit of difference.” He then packs his bags and walks out the door. He needs to be out in the world doing this work that most of us wouldn’t dare try, in places we wouldn’t dare go, often alone and living out of a suitcase. If he makes some peace for others perhaps it will finally come back to him. I have never heard the term “peaceaholic" but maybe it’s fitting.