The secret to Interpol's ongoing success 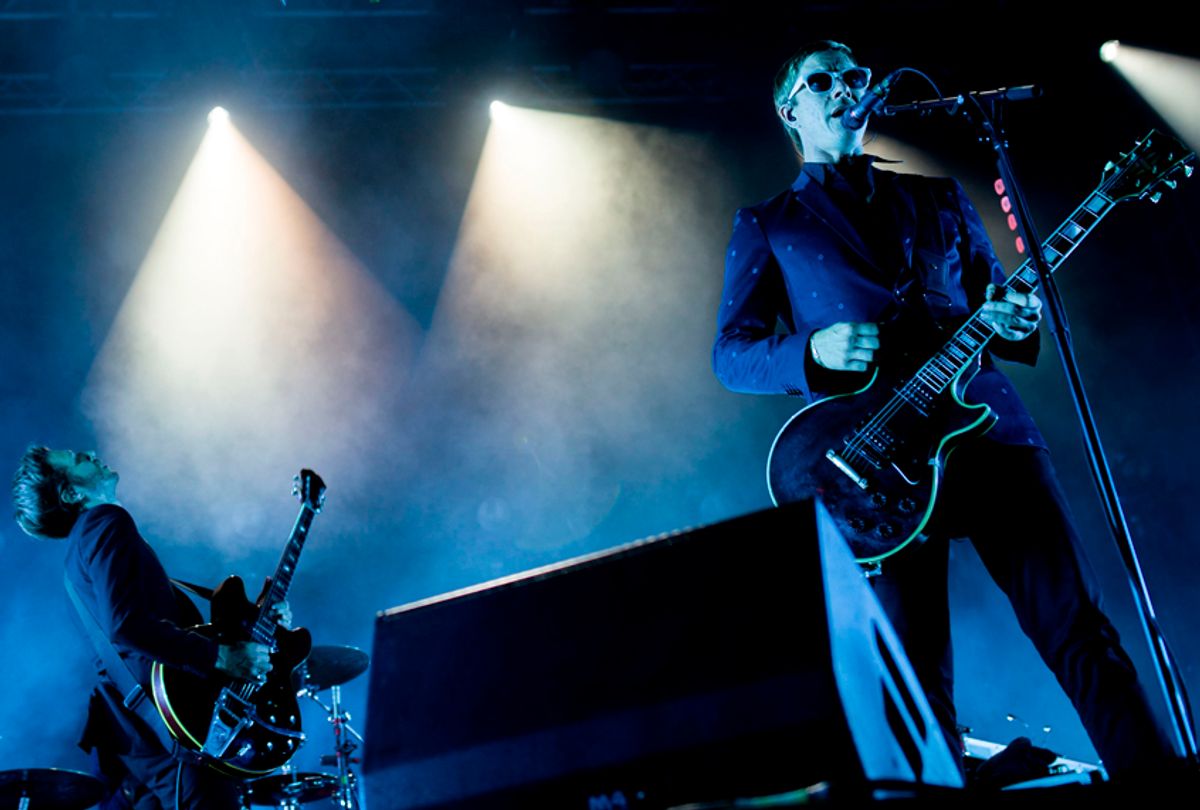 Lizzy Goodman's "Meet Me In The Bathroom" was one of the most salacious (and entertaining) music books released in 2017. An oral history of the debauched New York City music scene of the late '90s and into the '00s, it served as an eye-opening look at the ways this community reverberated globally. More than that, "Meet Me In The Bathroom" provided a rather vivid reminder of how vibrant and exciting music felt during this era, between the Strokes' shaggy garage-rock shuffles, the Yeah Yeah Yeahs' art-punk earthquakes and LCD Soundsystem's electronic fever dreams.

Of all the artists featured in the book, however, Interpol has arguably aged the best. A post-punk band that preferred neatly pressed suits to thrift store finery, the quartet brought gloomy pallor to the music of this time, courtesy of their landmark full-length debut, 2002's "Turn On The Bright Lights." Brooding and enigmatic, and evoking vivid gestures — a 2 a.m. bummed cigarette, keeping vampire hours, the grimy romance of city living — the album doesn't sound dated. In hindsight, the Joy Division tags thrown around at the time feel wildly incorrect; if anything, the comparisons to Echo and the Bunnymen—in particular that band's atmospheric dramatics — are far more precise.

In the years since, Interpol has remained a solid commercial act: Each of its last three albums has peaked in the Top 10 of the Billboard albums chart — which no doubt contributes to why the band has become label Matador Records' best-selling artist of all time — with the occasional radio hit ("Slow Hands," "The Heinrich Maneuver") as a profile-raiser. They don't switch up their sound in any drastic way, just add some shades of grey and the occasional pop of color where warranted.

Yet like Spoon — another early '00s darling associated with Matador — Interpol wields consistency like a badge of honor. In fact, they're headlining Madison Square Garden and the Hollywood Bowl in the coming months, and playing two nights at Royal Albert Hall. Even the 2010 departure of original bassist Carlos D (who was one of the few scene characters to decline being interviewed for "Meet Me In The Bathroom") ended up not derailing their momentum.

Interpol's sixth full-length, "Marauder," which was released Friday, is also its finest, most effortless-sounding full-length in years. Recorded with producer Dave Fridmann, the new effort harks back to the tense precision that drove "Bright Lights." Crisp, galloping riffs and vocalist Paul Banks' ghostly falsetto mark opening track "If You Really Love Nothing"; the needling "Complications" recalls the Cure's earliest, teeth-gritting work; and single "The Rover" sails along with arpeggiated guitar punctures and keening synth drone.

The guitarist discusses the making of "Marauder"

The parallels between "Marauder" and "Bright Lights" make sense, considering the context it developed: just as Interpol were planning an anniversary tour playing the latter album in full. "We were pretty deep into writing this record when [we] started rehearsing for the 'Bright Lights' tour," Banks told Entertainment Weekly. "And I think if we weren’t deep into a new project, just playing an old record wouldn’t have felt is fulfilling.

"So it was nice being so steeped in the future, but also to get on a stage and remember what it is to play in front of our audience, and then bring that feeling back into the studio. I would actually recommend it to any band — to interrupt writing a record to play some live shows. It’s a good way to keep it loose.”

But you also can't draw a straight line from Interpol's influences to its sound, something that's crystal clear on "Marauder." Sonically, the superlative "Number 10" — about an office romance, Banks has said — recalls the tornadic dream-gaze lift of Secret Machines, the defunct (and beloved) band of Interpol's long-time touring keyboardist, Brandon Curtis. (Interestingly enough, Curtis doesn't play on it, however.) "The Party's Over," meanwhile, is disorienting, as Banks' vocals are diminished in the mix, and overshadowed by Fogarino's drumming and snarling guitars.

The lyrics and themes of "The Marauder" are also shrouded in dread and consequences: things falling apart, apathy coming to fruition, restless drives, paranoid visions. "The Rover" in particular exudes a creepy, unsettled vibe. "The idea of that song lyrically is that it’s this character 'The Rover' who is basically preaching a doomsday-type message – but he’s also just a very charismatic and magnetic figure," frontman Paul Banks told NME about the latter.

"Once I had envisioned that as the concept and this character that I wanted to describe, it became fun wavering back and forth between his doomsday prophesying and his manipulative word choice and how he’s basically trying to get people to follow him."

"The Rover" was one highlight as Interpol played directly before the Cure on the main stage at the latter's Hyde Park 40th anniversary show. Even if it was disconcerting to be watching the band perform while it was still daylight, they did their best to conjure a club vibe. The stage's gigantic screens projected their performance in black and white instead of brilliant color, and the group members sported the usual dapper formalwear despite punishing heat.

What was most interesting about the set is how it resisted falling into the festival trap of being a hit parade. Despite an appearance by "Obstacle 1" early on, the hour-long set was measured and well-sequenced, and heavy on texture. Near the end, Interpol amped up the audience with "Slow Hands" and "Evil." But, overall, it was a smoldering slow burn more than a series of quick, explosive bursts, where the rewards came scattered over time — much like Interpol's career.

Editor's Picks Interpol "marauder" Meet Me In The Bathroom Music