Experiments at an abandoned 4,000-year-old mine in Wales have researchers optimistic about an unlikely solution 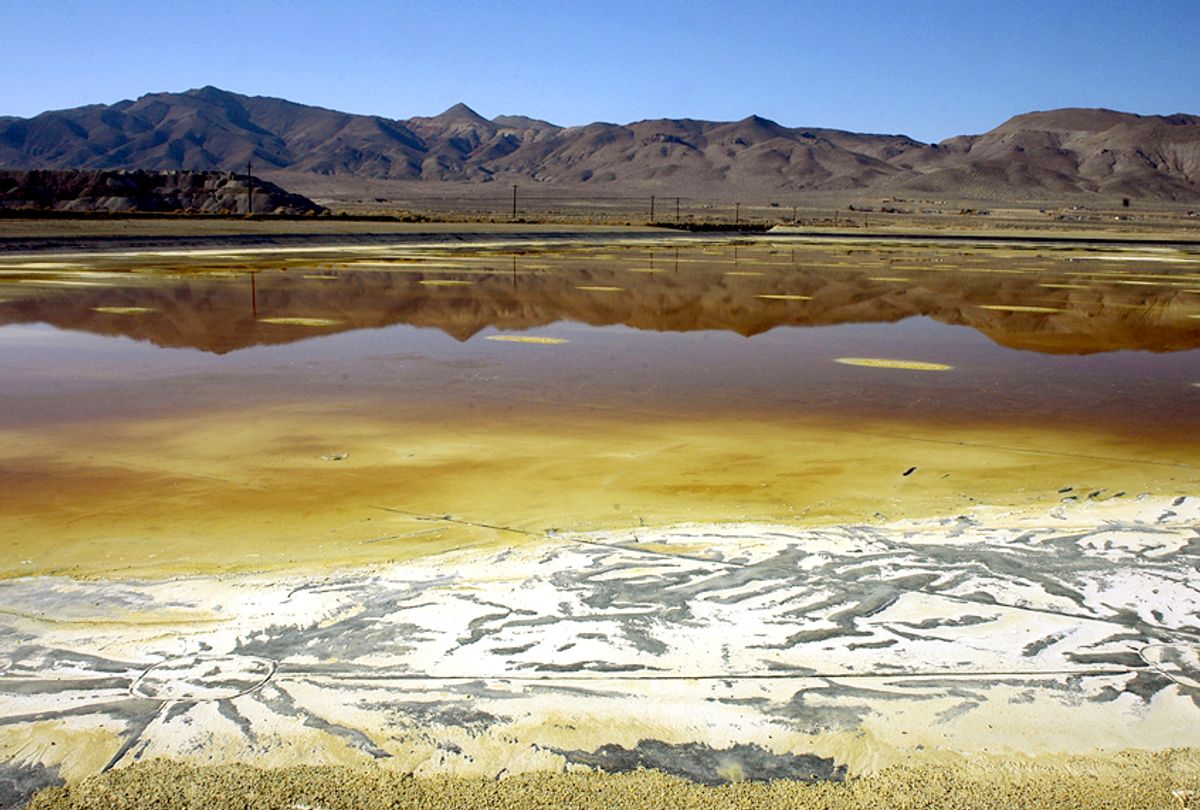 An evaporation pond holds contaminated fluid and sediment at the former Anaconda copper mine near Yerington, Nev. (AP/Debra Reid)
--

Staring down into the hollowed-out corpse of Parys Mountain, the rock walls are streaked in layers of vivid red, orange, yellow, and grey. Piles of rubble tower as far as the eye can see. Corrosive acid pools the color of dried blood drain into local streams. The abandoned mine has a poisonous legacy that stretches back 4,000 years – heavy metals have been extracted here since the early Bronze Age. Once the largest copper mine in the world, the site in North Wales stopped producing in the 1950s because it became cheaper to import copper ore from other countries. Abandoned for decades, it’s still one of the biggest heavy metal pollution sources in Britain.

This toxic landscape is the result of millennia of metal sulfide ore mining. The Parys ore deposit is an ancient hydrothermal vent field, layered with minerals containing a complex and rich metal content. Ores at Parys contain lead, zinc, and a whole host of other metals, in addition to the more usual iron, sulfur, and copper. When people dig into the ore in a mine, it’s exposed to oxygen and water. This starts a cascade of chemical and microbiological interactions that releases and dissolves the metals into water, making it extremely acidic as it flows out into the surrounding streams, soil, and nearby coast. Metal pollution from the water leaves measurable traces in sediments, plants, and and local wildlife.

Obviously, acidic mine waste (usually referred to as acid mine drainage or AMD) like the contaminated water from Parys Mountain and other sites is a problem. There are an estimated 280,000 abandoned mine sites like Parys Mountain in the UK alone. The United Nations Development Council recognizes acid mine waste as a key concern, releasing their latest report calling for better mine waste management in 2017. However, cleaning up, or remediating, this type of pollution is not easy or cheap. Storing mining waste behind large dams was historically popular, but the catastrophic and tragic consequences that follow a dam failure, like the Brazilian Bento Rodrigues disaster in 2015, illustrate this strategy’s shortcomings.

Up until 2003, Parys Mountain waste was stored behind dams in big overground and underground acidic lakes, with water so toxic that locals used to dissolve cars in it to dispose of them. But the dam was declared unsafe, so the polluted lake was emptied into the nearby Irish Sea. This kind of disposal into seawater is widely used and relies on the assumption that dilution will solve the problem. There isn’t much primary research on the topic so we can’t say how true this is with confidence, but research suggests that dissolved metals persist in the local marine environment much longer than we previously understood and may find their way into the local food chain.

At Parys, the acidic mine waste water drains through a natural wetland system constructed in 2003, to reduce its acidity and provides a place for some of the metals in solution to fall out. This kind of treatment system isn’t a perfect solution though, as plenty of metals still end up in the Irish Sea. It also needs lots of nearby land, which isn’t always available near abandoned mines.

I spent part of my doctorate thesis work in the field of Bioremediation, testing a different approach. My advisor and I designed a system that would cause a shift in the microbial community from the polluted water – essentially, encouraging particular microbes to grow that do things we find useful in this situation. This kind of biotechnology dates back as far as the Romans, who used it to treat their waste water though they didn’t really know why it worked. We also aren’t the first to think of applying biotechnology at Parys. 19th century miners used a primitive form of the same idea, extracting copper from the polluted waters by creating settling ponds where microbes caused copper to collect as a solid coating on scrap metal.

We had previously identified and officially named a species of acid mine waste microbe, Acidithrix ferrooxidans, from Parys Mountain that was new to science. This newly discovered species converts iron from dissolved to solid form – essentially the metal appears out of the polluted water as rusty chunks – and naturally grows as long, stringy anchored streamers in the toxic waterways draining the old mine. So we wondered: Could we grow enough of this species in the lab to help clean a stream of raw mine waste water from Parys Mountain? We hoped the microbe would remove dissolved iron and some of the other metals, while staying as anchored streamers in a big container, keeping the metals and microbes from being continuously being washed away.

To test our theory, we built two small-scale containers from odds and ends of plastic piping, junctions and fermenter bottles and grew a bunch of the Acidithrix ferrooxidans. We then fed the microbes a continuous stream of raw Parys Mountain corrosive mine waste, which we collected each week in plastic 20-liter bottles from the polluted Afon Goch ("Red River" in the Welsh language) drainage stream and drove cautiously back to the lab on twisty rural one-lane roads so as not to jostle the big bottles and risk spilling drops of metal-eating water into the car.

READ MORE: Scientists baffled by dying seals off the coast of New England

Much to our delight, it worked. The system removed 90 percent of the iron from the contaminated water by the end of five weeks. Even better, wild microbes from the polluted water settled into our container as well, helping the system to work better.

But, as with all science, there are hurdles in scaling the concept up to work on site at Parys Mountain. For example, the microbes don’t strain out all of the dissolved metals found in Parys water so we need to find a way to handle other metals before we have a full mine waste pollution treatment system. This kind of biotechnology is slower to develop than conventional technologies, because you have to make sure microbes can cope with the conditions you give them. But in return, you get a self-sustaining bioremediation system that – if you design it right – needs fewer additions, is cheaper, and demands less from the environment than conventional methods. The biggest source of acid mine waste pollution in the UK, Wheal Jane tin mine in Cornwall, has a pilot plant scale example of this kind of combination microbial bioremediation tank and wetland system.

At Parys, it’s very unlikely that the mine site itself will ever recover fully – but treating the polluted water is important to stop it further poisoning the land around it. Nor is this just a problem for Parys Mountain or North Wales. Wherever there is mining, there will be mine waste that needs treating. Modern legislation generally requires new mines to plan for dealing with the waste, but many abandoned mines are left that need attending to. This could be one potential solution.