"If you're white, you just can't criticize an opponent at all," the Fox News host also lamented on her radio show 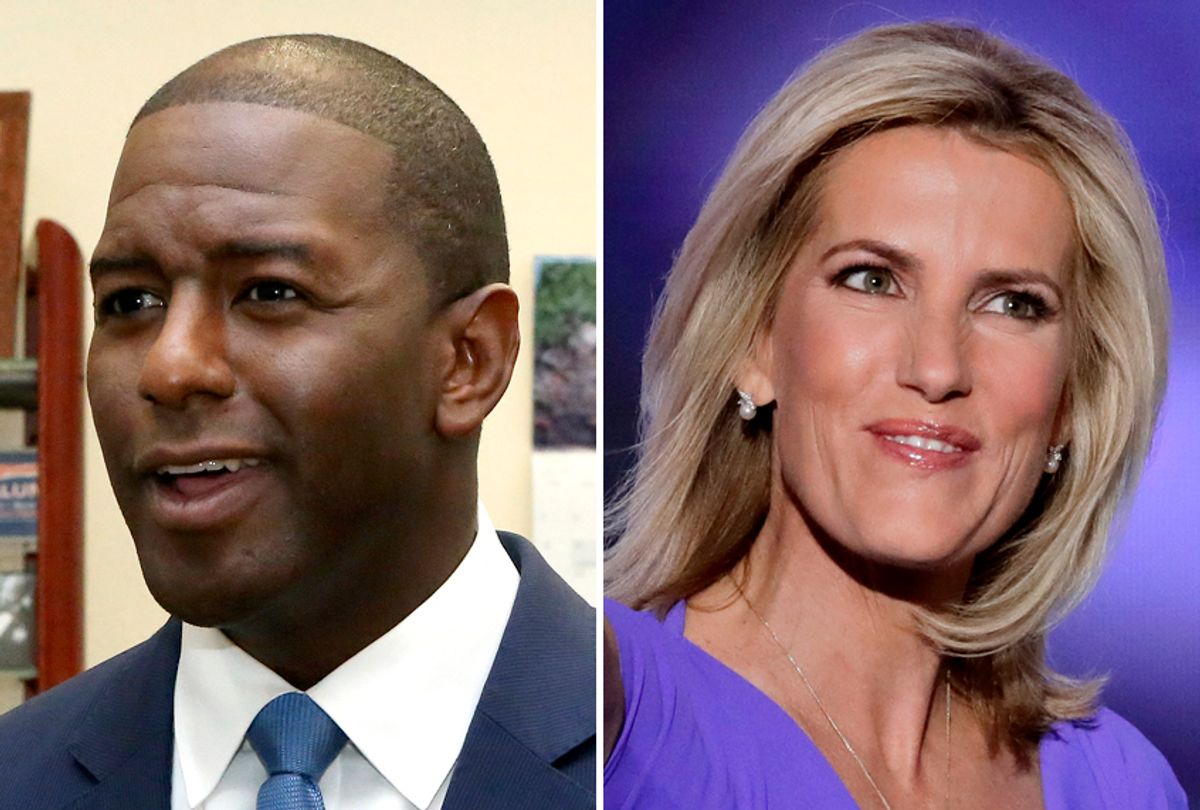 Host Laura Ingraham addressed the victory of Andrew Gillum in Florida's Democratic gubernatorial primary Wednesday on her primetime Fox News show "The Ingraham Angle." Speaking of the so-called rise of "hard-left socialist candidates," the Fox anchor compared the Tallahassee mayor's win to that of Alexandria Ocasio-Cortez, a candidate for Congress in New York.

"Gillum is the African-American male version of Alexandria Ocasio-Cortez," Ingraham said. "He’s young, he’s kind of dynamic and he’s running on a platform of universal medicare, legalize marijuana and abolishing ICE. Exciting!" she quipped. "And he’s viewed by hard-left Democrats as kind of a savior from the stranglehold that the party’s establishment has had on their desires, hopes and dreams."

"They picked the perfect guy," Ingraham quipped sarcastically. "His city hall – under investigation," she continued, referencing an FBI probe that seems to be focused on corruption in Tallahassee's city government, although a target of the investigation has not been named.

Wednesday's broadcast was not the only time Ingraham invoked Ocasio-Cortez when it came to her discussion of Gillum. Tuesday, after the Democratic primary results were in, Republican nominee Ron DeSantis sat down with Ingraham to discuss his victory and opponent.

"Now Congressman DeSantis, in your jubilation and your celebration, you may have missed that Alexandria Ocasio-Cortez tweeted out congratulations not to you – but to your challenger, Andrew Gillum – saying, 'The progressive movement is transforming the country, and he proved that again tonight. Gillum ran on Medicare for all, legalizing marijuana, abolish ICE and more. Thank you, Florida voters! On to November,'" Ingraham said. "I would wear that as a badge of honor tonight, congressman."

"Well, look, we have people in Florida who have fled socialist countries like Cuba and Venezuela. They don't want that imported into Florida," DeSantis replied. "We want to keep Florida great, we want to keep it going in a good direction and going in the direction of an Ocasio-Cortez is just untenable – and it will not happen in Florida."

Wednesday, DeSantis came under fire for warning Floridians not to "monkey this up" by picking Gillum, his black opponent in November during another interview on Fox News. The Republican nominee, who is backed by President Donald Trump, used language that has such strong racist connotations that even Fox News distanced itself from DeSantis' remarks. Refusing to apologize, DeSantis has maintained that his comment had nothing to do with race.

Responding to the controversy, Ingraham claimed on her radio show, "The Laura Ingraham Show" on Thursday: "Apparently, if you're white, you just can't criticize an opponent at all.

"If you criticize an opponent, you have to just — every word — you have to stop after you say every word or before you say any word, and think, 'OK, how will this be twisted by someone who is trying to avoid a real debate on the issues?'" she continued. "It's ridiculous."