"I am definitely pro-women and pro-women’s rights," she tells us. "I’m a woman, and I don’t see how I could not be" 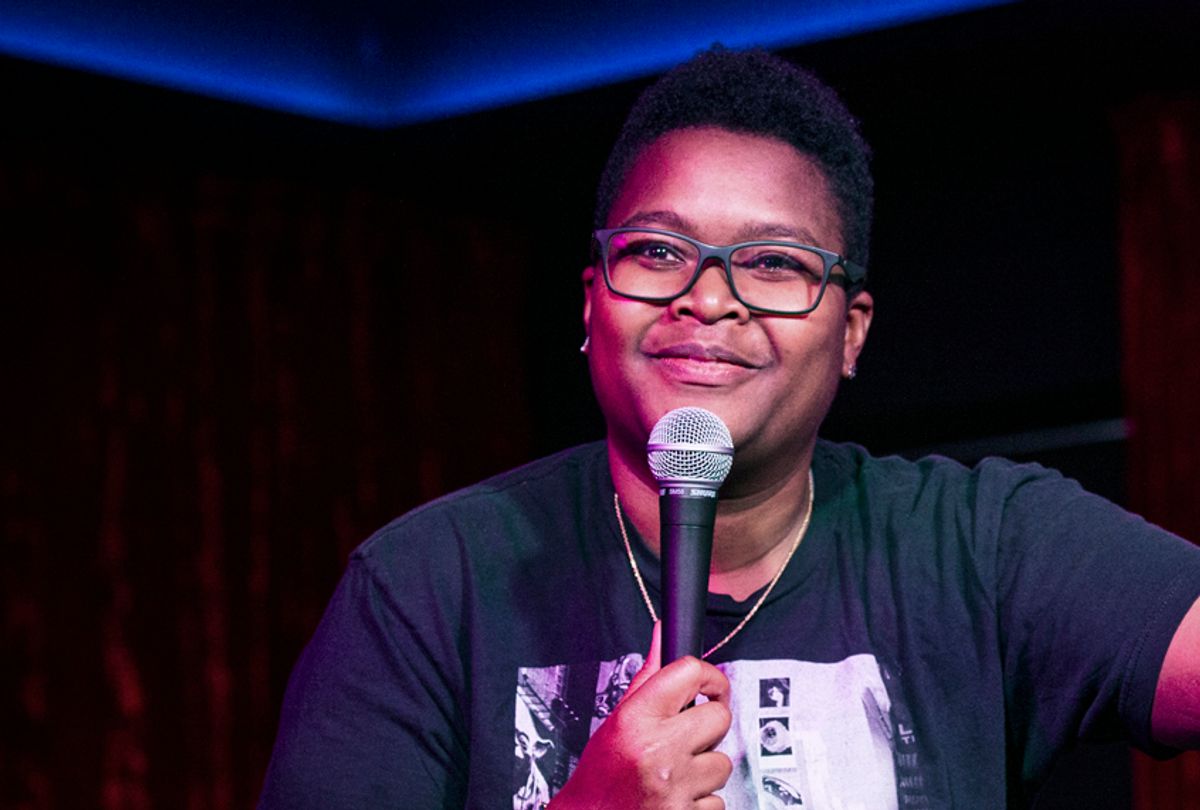 On paper, rising comedy star Sam Jay seems like an easy symbol for the progress that has been made in recent years by those attempting to diversify the overwhelmingly white and male standup scene. Her big career moves this year would be impressive by any standard: She got a job writing for "Saturday Night Live," she released a half-hour special on Comedy Central, she was on Netflix’s "The Comedy Lineup," and she just put out a hilarious standup album, "Donna’s Daughter." Press coverage has been consistent and glowing. And the fact that she’s a Black lesbian makes her even more appealing to audiences looking for a wider range of voices and experiences in their entertainment — both on stage and in writers’ rooms.

As the host of "Poptarts," a podcast in which we critique pop culture through a feminist lens, it was a no-brainer for me to book Jay as a guest. But when I asked her if she was a feminist — a question I ask all of our guests—she was the first person in 39 episodes to ever say, “No.”

“I am definitely pro-women, and pro-women’s rights,” she clarified. “’Cause I’m a woman, and I don’t see how I could not be, you know? But in this sense where I feel a need to claim a thing? No. I don’t walk out in the world and identify as that, if I’m being honest. I’m not gonna wear the T-shirt. If there’s a feminist rally down the street, I wouldn’t be like, I need to go to that because I am a feminist. No, I don’t feel drawn in that way.”

Intrigued and a bit confused, I suggested that many women who don’t identify as feminists resist the term because of the baggage that the word has taken on over time. But I quickly learned that Jay’s reasoning was not a simple case of semantics.

“Sometimes when I talk to women who are feminists, I just strongly disagree with some of their ideals,” said Jay. “I was in San Francisco, and this woman was talking to her friend, and it was a group of all women so she assumed we all were going to agree — already, that bothers me. I’m a bit of a contrarian, and I don’t like that in any setting. Don’t assume ’cause we’re all Black we’re all going to have the same idea about something, or we’re all gay, it just irritates me."

Jay described a conversation about a woman who had been fired from her law firm for being pregnant and who planned on suing:

"They basically were like, Well, you’re pregnant so you can’t do the job. So I’m listening, and I’m like, Yeah, that’s messed up. But she continues the story, and she’s like, Yeah, well, the woman had gotten pregnant. The woman had had the child. And then, a couple months later, she got pregnant again. So she already got the leave, and then after that leave, she came back to work, and then after a few weeks, she got pregnant again. And then the law firm was like, Hey, we kinda need someone that’s gonna be here, and you’re not gonna be here, so we’re gonna have to find someone else.

"At some point, they do need someone to do the job. Do they not? They’re a business. They have to function and run. And at some point, you made a decision. You chose that you wanted to do this. Why do they have to carry the weight of your decision? [These women were saying that] these men at this law firm are bad, and they don’t respect women. And I was like, I don’t know if that’s necessarily where this is coming from. Aren’t they just businesspeople who need to run a business at some point?"

“It makes me wonder though,” I responded, “if that person was a man, would he be getting the same static at his job because his partner just had a baby and then had another? In that way, the issue is paid family leave for every person.”

“But then let’s deal with the issue,” said Jay, “and not attack people—because the issue should be paid family leave for everybody and proper assistance for people who want to have children and take care of their children. Like, I have a career right now. If I decide to go have a baby, that career goes on pause. 'SNL' will hire a new writer. I have to decide, What is it that I want to do? You have to make a decision. Now, you’re in a leadership position at your job. You realize, Oh, I want to have a second baby. Well, they might have to move on without you."

“Do you think Saturday Night Live should work with you if you want to have a kid?” I asked.

“No. No, I do not,” Jay replied. “That show has to come on every Saturday. They have a responsibility to something, too. The way we write, we write [all together]. So if I’m gone for six months, they’ve gotta slide someone else in.”

“I think it’s important that we can have discussions like we’re having about paid family leave and we can all still legitimately be feminists if we want to claim the title because we believe that we should be able to own property, we should be paid the same wages as a man doing the same job, we should have equal rights and privileges in society,” I told Jay. “Because literally, we still do not; there is no Equal Rights Amendment. There is nothing legislatively protecting us as a class.”

Listen to the rest of this interview — about stand up comedy, about writing for "SNL," and more — with Sam Jay here: