What to read next: 5 recommended books for back to school season 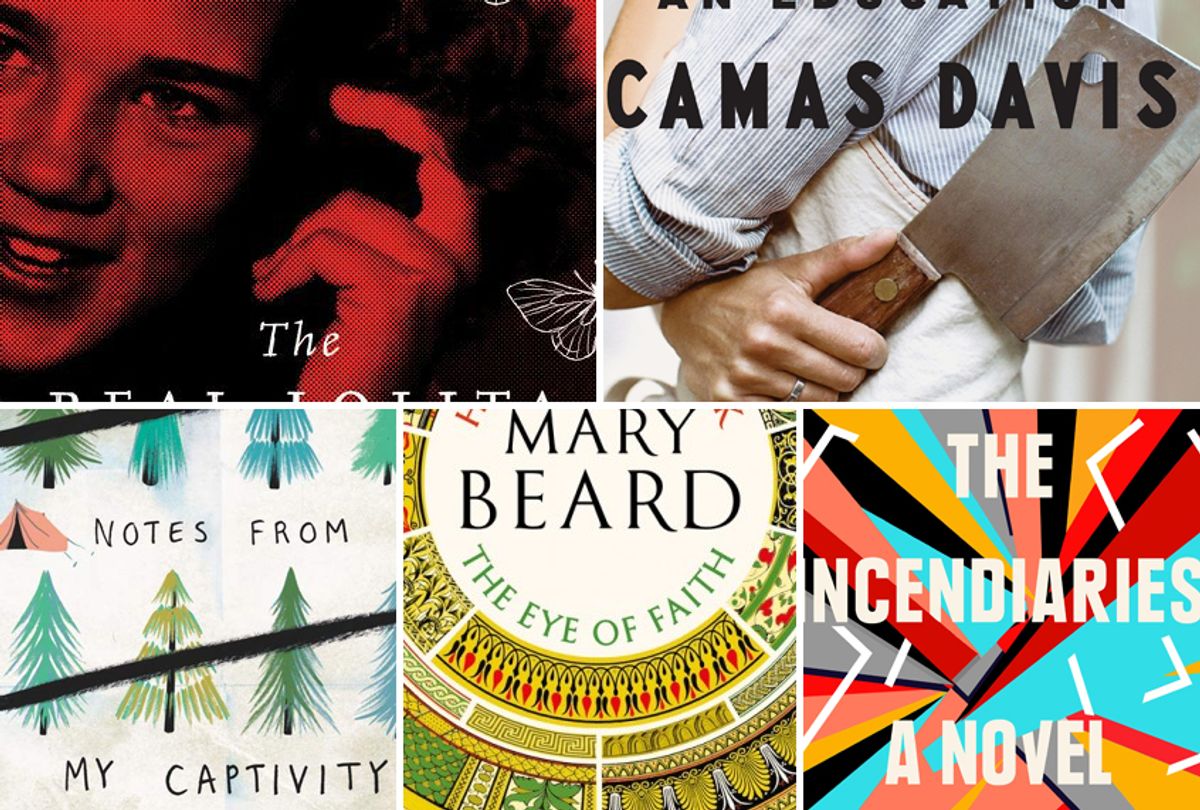 "The Real Lolita" by Sarah Weinman; "Killing It" By Camas Davis; "Notes from My Captivity" by Kathy Parks; "How Do We Look" by Mary Beard; "The Incendiaries" by R. O. Kwon (Harper Collins/Penguin Random House/Liveright/Riverhead Books)
--

This weekend marks the unofficial final hurrah of summer, and even if you're not heading back to the classroom — to study, to teach, or to support in some way those who do — the change in seasons is palpable long before the fall air crisps into sweater weather. Kids in their fresh backpacks and haircuts are moving en masse in giggling, honking herds; the inexplicable urge to buy a fresh notebook stirs. While our beach reads recommendations still stand for autumn, too — no book is only good for one season — if you find yourself in that back-to-school spirit, here are five recently published or upcoming books that will take you to class, one way or another.

“Notes From My Captivity,” Kathy Parks

The college admissions essay is already a high stakes assignment. In Kathy Parks’ lively YA novel “Notes From My Captivity” (Katherine Tegen Books), rising senior Adrienne Cahill goes for broke with hers, tagging along on her professor stepfather’s summer research excursion in order to debunk his belief in an apocryphal Russian family rumored to live in seclusion in the Siberian wilderness (reminiscent of the stranger-than-fiction tale of the Lykov family). When the search for the possibly dangerous (and possibly imaginary) Osinovs goes sideways, Adrienne’s goal flips in an instant from breaking journalistic ground and getting into the college of her dreams to staying alive at any cost.

Adrienne is a headstrong character whose skepticism is driven more by grief than spite, having never healed properly from her father’s untimely death. Her experiences in Siberia may not be what they seem, and when she's in the thick of it getting into her dream school is the furthest thing from her mind. But “Notes From My Captivity” isn’t just a compelling adventure and an exploration of what it means to believe in things — or people — that others say can’t be true. In her wild and often wryly funny take on the “what I did on my summer vacation” tale, Parks digs deep into the power of forgiveness and the beautiful fragility of human connection in this life, and beyond.

"Killing It: An Education," Camas Davis

I had heard about Kate Hill’s Gascony cooking school long before I picked up Camas Davis’ engrossing new memoir, “Killing It: An Education” (Penguin Press). It has a reputation for being the perfect place to run away from your real life and immerse yourself in the tangible pleasures of learning how to make good things from scratch, especially, perhaps, when nothing else about your best-laid plans — in Davis’ case, that’s both career and love life — is working out. When Davis, a food writer and editor by trade, lost her job at a Portland magazine, she decided to head to France to learn the art of butchering, living and working at Hill’s and apprenticing with the Chapolard family, who raise, slaughter, and process their own heritage pigs, and manage to teach Davis, despite her haltering French, to “dream in the language of fat and skin.”

“Killing It” is both a sensual and sensitive ode to the necessity of lifelong learning and a deep look into the painstaking work of turning animals into "farm to table" food that is simultaneously highly prized and depressingly devalued in U.S. culture. Davis’ story could have ended at the close of her time in France, but instead the second half of the book is devoted to how she brought her new skills from the French abattoir home to Oregon. This is the part we often don’t see in memoirs about a person taking time off to rediscover themselves — how to make a life for that new person once the fabulous part of the journey is over.

In her 2015 essay “Men Explain Lolita To Me,” Rebecca Solnit illuminates a brutal truth about Vladimir Nabokov’s literary classic so often obscured in academic conversations about his masterful prose: that consuming the sheer amount of literary material that’s been produced and preserved about men raping women and girls “can have the cumulative effect of reminding women that we spend a lot of our lives quietly, strategically trying not to get raped, which takes a huge toll on our lives and affects our sense of self.” Solnit continues:

". . . I was trying to articulate that there is a canonical body of literature in which women’s stories are taken away from them, in which all we get are men’s stories. And that these are sometimes not only books that don’t describe the world from a woman’s point of view, but inculcate denigration and degradation of women as cool things to do."

Through meticulous scholarship and reporting, Sarah Weinman (editor of the Library of America box set “Women Crime Writers: Eight Suspense Novels of the 1940s and ‘50s”) gives one such story, at least, back to its girl. "The Real Lolita" (Sept. 11, Ecco) reconstructs the life and eventual death of Sally Horner, an 11-year-old girl from Camden, NJ, who was kidnapped in 1948 by a man who posed as her father as he moved her across the country to evade the law. Fictionalized details of Sally Horner's years of rape and captivity at the hands of a serial predator, which came out when she was finally returned to her mother and her rapist was put on trial, run through Nabokov’s novel.

Alongside her comprehensive reconstruction of what we can and can't know about Sally's life and experiences, Weinman digs deep into Nabokov's papers and the novel's text to prove that rather than a mere footnote in the making of "Lolita," where Nabokov would have liked it to remain, Sally's story actively shaped "Lolita" into its final, devastating form. "The Real Lolita" is more than literary detective work. It's nothing less than an act of literary justice, putting the focus of "Lolita" where it and the focus of other such works have always rightfully belonged — on the girls whose stories we too often allowed to be swallowed by men's obsessions and ambitions. "Lolita" will remain a literary classic, but Weinman's book should be taught right alongside it.

R. O. Kwon’s debut novel “The Incendiaries” (Riverhead) has been a standout of the summer season for good reason. Set on the idyllic New England campus of fictional Edwards University, “The Incendiaries” takes standard campus-novel archetypes — the scholarship kid, the party girl, the charismatic counterculture dude — and strips them of their outer layers of protective skin, then sets them on a collision course with each other. At the heart of this novel are burning questions about the nature of faith and belief and what fills a person up when a “God-shaped hole” appears.

Told in alternating points of view, the story begins with Will, the aforementioned scholarship student, watching an act of terrorism unfold, fearing his ex-girlfriend Phoebe is involved, and trying to understand if or how that could happen. Phoebe, a former concert pianist still grappling with unresolved grief from a family accident, falls in love with Will and then becomes enmeshed with a former student who claims to have emerged from a North Korean prison with very clear ideas about how to live a life of faith and discipline. Will's skepticism about Phoebe's ever-escalating quest to prove her devotion to what looks, walks, and talks like a cult is partly rooted in the trauma of his own evangelical past.  Kwon's precise command of her story's unfolding into what we know from the beginning will end in flames keeps the pages turning, while her devastating language makes even the quietest moments flicker with intense longing.

"How Do We Look," Mary Beard

Don’t forget what you learned about art history sitting in cavernous lecture halls and nodding along during guided tours throughout the years, but do try to forget, while you’re reading “How Do We Look: The Body, The Divine, and the Question of Civilization” (Sept. 4, Liveright), how you learned. Rather than focus on individual geniuses and the movements they collectively created, Mary Beard asks us to look at art not merely as objects of beauty but also as clues to what and how the humans who were alive at its creation thought about being alive in the world.

In Part One of the Cambridge classicist and treasured public intellectual's slim new inquiry on art and its place in civilization, she considers depictions of the human form throughout the millennia and the ever-evolving role these human likenesses have played in the lives of the living people who see them, both when they were created and now. Her insights on the hundreds of statues known as the Terracotta Warriors, to use one example — the sculpted version of an Imperial army made for and buried with Qin, Emperor in the third century BCE and uniter of China — focus not on the craft involved in creating each statue's astounding individuality but on the "formulaic" mixing of "a fairly restricted repertoire of elements," which Beard says "offer a challenge to any simple notion of a true portrait." That, then, offers a challenge to any simple notion of humans as unique creations. One thing we can know for sure, she says, is that the terracotta army was a muscle-flexing demonstration of imperial power, and that not long after they were buried alongside the emperor, his tomb was raided by rebels and many were destroyed at their hand. "In that keen desire to destroy" these facsimiles of human likeness, Beard writes, "lies the clearest sense of the power of these images."

In the second half, Beard examines the functions and forms religious art has taken and its effects, intended and accidental, on the people it served, including a reappraisal of the destruction wrought by Protestant iconoclasts on works of art in Catholic churches. In the case of Ely Cathedral, statues weren't turned to rubble by Cromwell's soldiers but rather brutally relieved of their heads or hands, and otherwise left intimidatingly intact, like warnings to the worshipers. "It is almost as if they have been turned into a different kind of image in their own right," Beard writes. "The statues now standing proud, bearing the scars of their mutilation, have become a visual narrative of religious conflict."

Beard's way of seeing offers a deceptively simple way of flipping the script on how art history is usually taught, away from emphasizing the individual works of artists and their intents and placing it instead on the communities that consumed the art of each time and place, and the role the art played in reinforcing how people were to live, or else upending those expectations. Whatever you do, don’t chaperone one more trip to the museum before reading this.